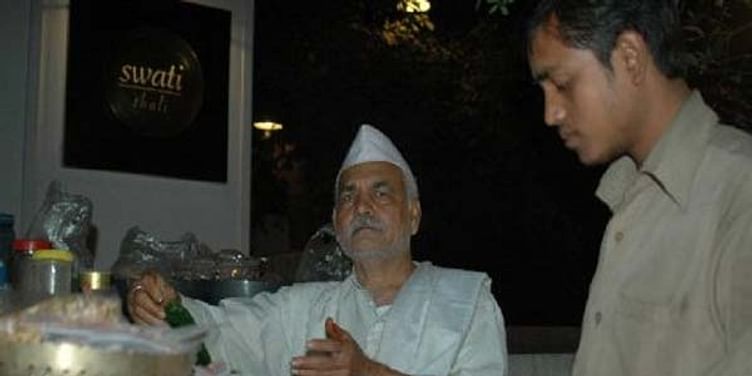 While traveling around the country interacting with youngsters, many who are studying in best of the institutions like IITs and other prestigious colleges, and who claim and want to get into institutions like IIMs, don't have any purpose or goals defined. They say they want to do an MBA, but do not know anything beyond saying ‘Good job’, ‘good salary’, ‘enhancing ones skills’ and so on. When I ask them what did they learn in the current course they are pursuing, they are either blank or retort saying that ‘I learnt nothing here, hence I want to do an MBA’.

Unsung Heroes is about featuring men and women who are omnipresent in the street corners or on occasions, who people hardly take notice of or talk about; but they are the ones who believe in ones own dream, chase their calling in life and have realized their dream.

My friend Ajesh, an erudite edupreneur and a CL family member in Ahmedabad, asked me whether I would be interested in having typical Gujarati snacks at a much sought after restaurant SWATI Thali in Ahmedabad in the month September, 2010. I jumped at his offer. I realized how popular the restaurant is by the waiting numbers outside the restaurant. We too took our seats in the queue to be ushered in.

While waiting, I noticed an elderly gentleman in his dhoti, kurta and a typical Gandhi cap briskly making paan, while a couple of youngsters are catering to the cutomers by reaching out the paan they were seeking from ice-boxes that already have stacks of paan.

As is my wont, I was keen on talking to the elderly gentleman, but he was so busy that I was observing the way the production of paan was carried out, the customer service, friendly smile and quick comment being passed on. I could go no further as our turn came to get into the restaurant.

The snacks that we had in the restaurant were out of this world. The story about ‘Swati Thali’ is another one. I shall retrict myself to the elderly gentleman caterging paan now. When we emerged out of the restaurant, still he was as busy. I had a quick word with him, appreciating the way he was conducting the business, with a promise to catch up with very soon when I visit next.

On the eve of Republic Day, 2010, I was once again in Ahmedabad and I grabbed Ajesh’s offer to get to Swati. This time, fortunately, it was not a weekend and the crowd at the paan shop was not as thick. I went up to the elderly gentleman after a while, when he took a break from packing paans, and sought time to interact with him.

He took me aside. We sat and began to interact and he gave insights into his journey…

My observations on his business and his interactions –

My observations and a quick back of the envelope calculations yields-

Naturally “Yin cheejon ke bhare mein baat nahin karte” – We do not talk about these things!

I asked Jainarayan Nag, why he has not ventured into the internet space with his website. I told them it is possible that he may get orders from abroad too for his paan. He responded saying that “many people going abroad, order for a few hundred paans and get it packed”, and he is open to creating the website if I could find a couple of youngsters who can create one. Next day while talking to a couple of hundred youngsters at Ahmedabad at NIRMA university, I threw this idea to them. If only any youngster could create a website for Jainarayan Nag’s “Swati Paan Bhandaar” and asks for 10% of the profits generated through the web!

And not too far from Ahmedabad, there is a very famous Paanwala in Surat, Ghantawala who has recently gone online. Find his facebook page here.