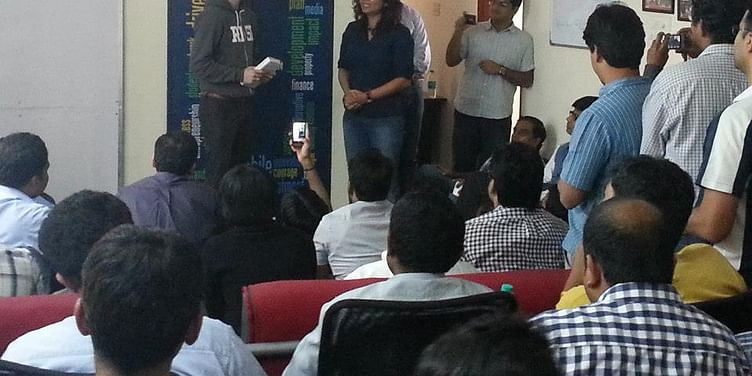 A lot of stars have to align for the birth of a startup. Take Joe Gebbia,’s story for example. When the chief product officer and co-founder of Airbnb quit his job to startup with his friend and design school coursemate, his landlord decided to raise his rent by 25%. What would you expect him to do? Presumably, go back to his old job?

But Joe was not one to give up. With the singular aim of paying his apartment rent, Joe and his friend and co-founder Brian Chesky

designed various solutions, including one which involved renting out space in their living room. The guests would sleep on makeshift “air beds” and Joe & Brian would cook breakfast for them. Something more than regular bed and breakfast – these were the beginnings of Air bed and breakfast aka Airbnb.

Their first guests loved the experience. One, they paid a lot lesser than what they would have to shell out for a hotel accommodation. Second, the experience of being hosted in a new city is unmatched. Soon, more people with free space in their dwellings wanted to host people for the extra buck and since then there’s been no looking back for Airbnb and team. They are one of the most exciting startups in Silicon Valley.

Every startup goes through its fair share of starting troubles and challenges and overcoming those challenges is what makes one stand out from the other. Joe was the YourStory office yesterday afternoon to talk to a packed room of entrepreneurs about his journey with Airbnb, the experiences and learnings from the roller coaster ride.

Joe and Brian were design students at Rhode Island University and as he spoke about design, his eyes lit up with passion. He discussed aspects of design on the most regular things; in this case, a bottle of water that he was holding. He said, “Technology is very important. For a site like ours, you want a working payment gateway etc. But a great design transcends function. People who use your product will begin to love your product, if it is designed well. They will refer to love and your product in the same sentence. That is what a good design can do for you.”

Good design also means that a product is intuitive to use. And Joe said if our mother’s could use it without having to call you for help, then that is good design. Airbnb’s user interface is evidence enough of how the founders have kept design and technology on top of their priorities when making the Airbnb platform. For someone searching for a place to bunk over in a new city, searching on Airbnb is an absolute pleasure.

Joe equates his relationship with his co-founders similar to marriage, “only you don’t make love to them,” he said. In the beginning, the Airbnb team had two designers working on the online platform. “I asked Bryan, ‘who’s the best technology guy you know?’ and he said, ‘Nathan Blecharczyk’." A Harvard graduate and pro with computers, Nathan loved the idea and decided to join Airbnb. Those three were the functional founding team with complementary skill sets. Joe urged the audience in the room to settle for nothing less than the right partner, when it comes to finding a suitable co-founder(s).

The trough of sorrows

Joe warned every entrepreneur in the audience of the phenomenon of little or no growth for their startups. He refers to it as the trough of sorrows. In case of Airbnb, the trough came after a high and it stayed at a trough for a quite some time.

“There was a conference in San Francisco, where almost every hotel room in town was booked and a lot of people used the platform and we saw some great traffic on the site. But as soon as the event ended, the traffic dropped back to its usual self, which wasn’t much. This lasted for quite a few months. This was one of the most frustrating times with Airbnb.”

He described their situation as two gears, namely the market and solution, which weren’t meeting. But Joe admits that this is normal. He says, “When you’re out doing something for the first time, there is a good chance that you’re not going to get it right. All you can do is correct and continue.”

Finding your customers and listening to them

While at Y Combinator, the team identified New York City as the market where Airbnb is most needed. Paul Graham of Y Combinator told them ‘If your customers are in New York, what the hell are you doing in San Fransisco?’ So Airbnb went to New York, where they really took off.

While at New York, Joe and his team would speak to potential customers wherever they could find them and work tediously towards solving their pain points. He says, “When you’re starting something, you make some assumptions and hope for them to be right. This isn’t always the best thing to do. What worked for us is that we were always in touch with our customers. We jumped on every possible opportunity to do so. For example, we ran a free service, where we’d go and click photographs of newly registered apartments and in the process, we’d understand their troubles better. We quickly incorporated that feedback into our product.”

After seeing success in New York, the focus of Airbnb has been to replicate that model in other cities.

That’s pretty much the story of Airbnb. And the moral of this story is solve a problem, by connecting the dots of opportunity and need. More often than not such businesses will succeed; like Airbnb.