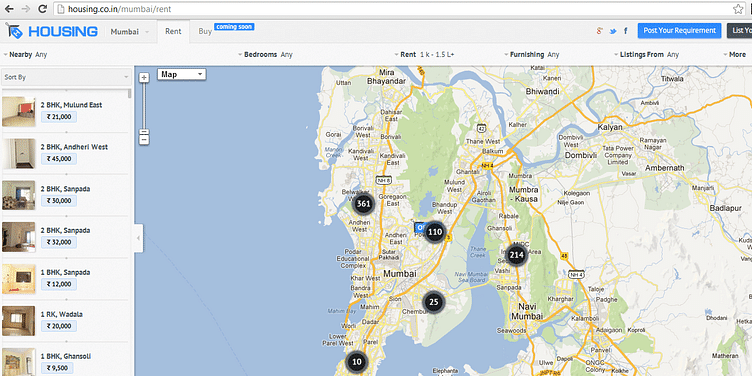 Mumbai based real estate portal Housing.co.in has announced its first round of funding. This is an angel round and as many as 8 investors have invested in the company. This round is lead by Zishaan Hayath, who's the co-founder of the Future Bazaar acquired Chaupati Bazaar. He was previously the VP of products at future Bazaar. The other investors include, Vaibhav Puranik, Shishir Kapoor, Hemanth Goteti, Gagan Goyal, Harsh Baid, Aditya Agarwal and Aatif Misbah.

Started by IIT Bombay alumnus, Housing.co.in's current crop of investors is also, save one, predominantly from IIT B. We caught up with Advitiya Sharma and Zishaan Hayath to know more about the investment.

Operational break even and Hiring

Advitiya Sharma shared that Housing.co.in has already achieved operational break even and the main use of the investment will be to hire top talent. He said, "We're looking to bring A+ players into our team and we have already begun our hunt for these people at the

premier institutions in the country. Some of them will be joining our team soon.

When we last covered them, we had pointed out the relatively small list of accommodation that the portal provides. When asked if the current investment will be invested in it, he said, "We're not worried about it right now.  While other players do have larger listings, our list is curated and we take ownership of the accuracy of the information that we put up. That is more important to us."

Talks about investment have been going on for while and Advitiya believes that they have a very good mentor in Zishaan. He said, "When you look at what he's (Zishaan) done with Chaupati Bazaar and his current work at future, it's really exciting to have him on board. In our interactions with him so far, we've been very impressed with him and the team of investors that have come on board."

When asked about the possibility of a Series A round in the near future, he said, " We have got interest from some Indian and foreign VC's, and are looking for the right partner who can match our core belief of 'Speed'."

A great team working on a broken space

In our conversation with Zishaan, he revealed that one of the main reasons that led to this investment was the team at Housing.co.in.

He said, "This is a very strong team which executes at a very fast pace. To me, that's really important and you could say that it was one of the main reasons behind the investment."

He also believes that there is enough to be done in this space - "Even after 6 years, there isn't a single portal that I can use to find an apartment to live in. This online real estate listing market is broken and I think there is space of a good product to dominate in this industry."

Zishaan revealed that he will be helping out housing.co.in with strategy and product development. He also reiterated his faith in the team by saying, "I won't be surprised if this team raises a bridge round or even a Series A round in the next 12 months. This is a great team working on a great product."

Join us in congratulating Housing.co.in and stay tuned as we bring you the latest happenings from the Indian startup space.