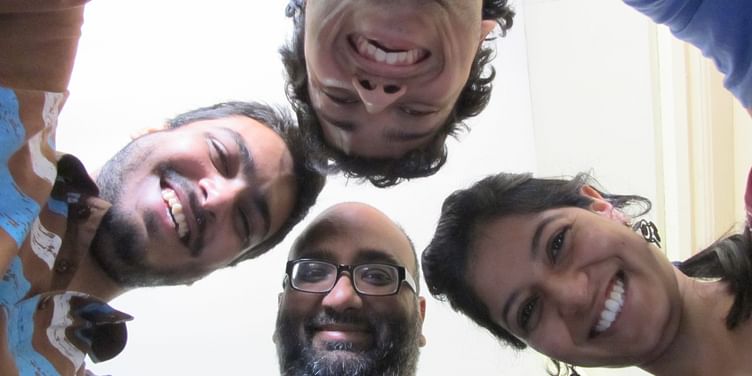 This article is a part of the Culture Series we’ll be carrying as a run up to the Startup Jobs Fair, India’s first exclusive campaign to connect the most promising talent with the most exciting startups. This series will bring out the culture of some of the most dynamic startups that have managed to scale and make a mark… Here, we talk about Mobstac…

MobStac’s platform which renders a desktop website in a mobile friendly version is now seeing great traction and has been getting rave reviews for its product in leading media publications. They will be at the Startup Jobs Fair, looking to hire programming and managerial talent.

I had the chance to spend a few hours with the team in their Bangalore office, to understand the work culture of this interesting startup. Instead of getting the founder’s perspective on the culture, I was advised by Ravi Pratap, CTO and co-founder MobStac, to talk to employees across various levels of the organization.

What transpired in the next one hour was four back to back conversations with various MobStac employees, which gave me an interesting insight into the culture of this young company.

Read on for four very unique perspectives, on the work and culture of this unique startup.

Garima Batra is nearing the end of her six months internship at MobStac and coming September, when she passes out of college, she will be coming back to MobStac for a full time job. When asked about her experience at MobStac, she says, “A lot of seniors in college had already told me about the benefits of working at a startup, so I had a fair idea of what I was getting myself into. The only thing different was the work load. We’ve spent a few all nighters at office, just coding away with pizzas, coke and movies.”

Garima describes working at MobStac as fulfilling. “I start every day knowing that I have a new and interesting problem to solve,” she says. Garima also has a placement at a large corporate, which she is going to forsake to join MobStac. She said, “This is exactly how I imagined my professional career to start -- an open, informal and friendly culture. It’s not that big a change from being in college.”

When Bhashkar Sharma first joined MobStac, there were only two other coders, one of whom was the co-founder of the company. “I was referred by a college senior to MobStac, and I have been with them for all my professional life,” says Bhashkar, who’s a core platform engineer at MobStac.

To Bhashkar, getting recognition of his work is the most important thing. He says, “When someone asks me what I do, I can just pick out my phone and show them exactly what I do. I could have never done this at a big company.”

Rahul Gulati, who’s also one of the early employees at MobStac has similar views about working at MobStac. He says, “It’s a fast paced learning environment and everyone who comes here goes through a phenomenal learning curve.” He says, even the technology that the company is working on reflects the culture of the company. He says, “It’s not some sort of stable software ecosystem that we’re working on. Mobile is almost evolving every day and to stay on top of it, we’ve got to keep learning.”

While both of them agree that the workload is quite high, they both very vocally express that they’d be in no better place to be at, than MobStac.

Nagaraj Nagabushanam joined MobStac after heading The Hindu’s online business. When asked about why he moved from such a senior position in a reputed publication to a startup, he jokes, “It’s a senior position here also! But yes, it is a definite change. I love building things, and a place like MobStac really allows me to do so. I might probably become an entrepreneur later on, but as of now, this is entrepreneurial enough for my liking.”

The biggest plus point about working at MobStac for Nagaraj is the opportunity to work with a great team. He says, “When you work in a place where everyone is at the top of their game, it sets a great benchmark for you to work towards. The team at MobStac has an amazing focus on delivery and customer satisfaction.”

About what changed compared to his life at The Hindu, Nagaraj says, “Yes, there is a considerable loss of influence. People who used to speak to me like I was their best friend don’t even receive my calls anymore. I’ve gone from being a customer to a vendor. But the feeling of being released from the shackles of a big organization, is liberating. It’s powerful.”

His advice to other’s who are contemplating such a shift is simple -- “If it feels right to you, then you should do it. Don’t overthink it.”

After speaking to four of his employees, Sharat Potharaju, co-founder and CEO of MobStac shared a few words about his intent behind building MobStac. He says, “We built the company around a few core principles. First, we wanted to create an environment where failure is allowed. It is the best teacher. However, repeating the same mistake isn’t appreciated. If you’ve made it once, it shouldn’t be done again. Make new mistakes.”

Another thing they have focussed on is to make decision making as decentralized as possible. For instance, a hiring decision is done by at least 5 of them. If even one of the 5 isn’t sure about an employee, they don’t go through with the hire. Even if that decision is against their own. It’s like a mini security council in there!

And finally, MobStac has a very performance based culture. Everyone has variable pay and employees love it as they all know exactly what they’ve contributed to the organization.

However, at the job fair, Sharat and MobStac will be looking for one main thing. “Of all the great people that I’ve met, one thing is very apparent, they’re all intrinsically curious people. They have a level of intellectual arrogance and at the same time they’re grounded. It’s a very enviable concoction and we hope to be able to attract these kind of people.”

Is this you? Be sure to be at the Startups Jobs Fair.