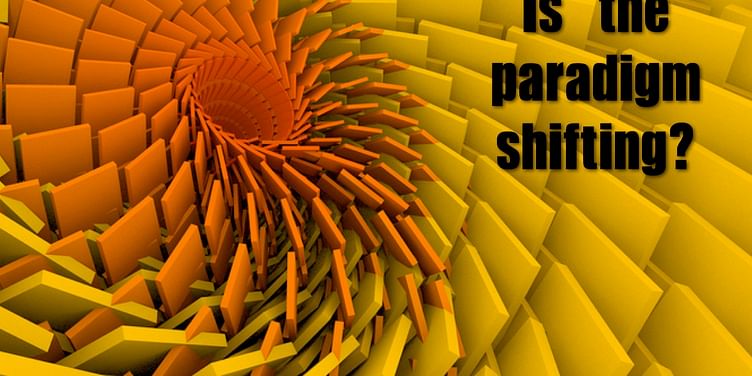 Contrary to popular belief, the term ‘paradigm shift’ did not originate in management speak. It owes its origin to Thomas Kuhn.

In case you’re wondering, Thomas Kuhn wasn’t a management expert, VC or a mentor. Neither was he a successful entrepreneur with multiple exits.

Thomas Samuel Kuhn was an American physicist, historian and philosopher, best known for his work 'The Structure of Scientific Revolutions’, first published in 1962: widely held to be one of the most influential books of the 20th century.

Because in the book, Kuhn challenged long held beliefs about the scientific process.

If you’ve ever argued with a scientific geek on why science is preferable to religion, you would have heard the gist of common belief about science. Most people believe that scientific progress is linear and continuous. Loosely translated, that means we keep refining the truth, but the underlying model of understanding the world does not change. All new thought is additive or corrective to what science already tells us. We know how the world works and we’re just refining our understanding of it.

Kuhn challenged the fundamental principle this was based on. Scientific progress is revolutionary, not evolutionary was his claim.

Kuhn observed that through the progress of science, there have been discontinuities - ‘normal’ phases followed by ‘revolutionary’ phases, where established thought is challenged. Think, for a moment, about quantum mechanics and its relation to Newtonian physics. For over two hundred years, Newtonian physics was the gospel that explained how the world worked. Then came quantum mechanics - not an incremental addition to the existing Newtonian model, but a radical shift in ideology.

Kuhn’s insight was that scientific thought is largely affected by the intellectual framework of the day. This, he claimed was a paradigm, a way of seeing the world. Paradigms are established as a dominant pattern of thought that are sufficiently open-ended to let others explore and research. Paradigms offer a promise of success, that normal science validates.

Going back to the example of Newtonian physics, the fountainhead was the Principia Mathematica which outlined a way of understanding the world. Others came along, found the idea appealing and then built on it. The fundamentals weren’t questioned, as students of a system were tutored on the rules that made the model appealing in the first place.

Change in a paradigm begins with discovery or identification of anomalies, incidents that do not fit the pattern. In many cases, the paradigm is reworked to absorb the anomaly, when the anomaly can still rest with other assumptions.

However, and more interestingly for us, when there is strong evidence anomalies do not fit into the pattern, there is a chance that the fundamentals of scientific thought are reconstructed, or the paradigm shifts.

Are we beginning to see the shift in societal paradigms now?

If we examine the sociological process of entrepreneurship in India with the same lens, we see an interesting pattern. Through most of the first decade and a half of liberalization, we can reasonably claim that the dominant paradigm, at least in the tech space, lay in working for an MNC or an industry leader. Starting up on your own was an anomaly.

While we still cannot claim that entrepreneurship is the first alternative for people, the air smells different. There’s perceptible change in attitude towards entrepreneurship. And we at Yourstory have also seen a significant bulge in number of companies speaking to us over the last couple of years.

Over the last few years, there have been multiple instances of companies reported as making it huge or gaining a humongous valuation.

As mainstream media started talking about these success stories, the grand Indian influencer system took notice (in most cases, the battle for turning entrepreneur are fought at home first. Convince your family and help them fight the mis-perception that you couldn’t get a ‘regular job’). The dominant thought pattern shifted.

It’s not as if entrepreneurship is everybody’s dream, or that everyone aspires to it. But it is getting noticed, and accepted.

If we look to Kuhn, any change in a paradigm causes a period of crises; in Kuhn’s words “a proliferation of compelling articulations, the willingness to try anything, the expression of explicit discontent, the recourse to philosophy and to debate over fundamentals”.

Our crises is social - who will love/marry an entrepreneur? - how do you contrast with a friend in the organized sector who’s just bought a house? - what do I say when someone asks what is your son doing? - why do you want to stay in India when you can take an onsite job and earn handsomely?

But as we grapple with these questions, let’s celebrate today that we might look back in a few years and see that the paradigm has indeed shifted. And there is no specific day for entrepreneurship, because it is so commonly accepted.

The author can be reached at [email protected] or at @shrinathv.

References for Kuhn and his work: