Vertois Training - A lucrative business with a social impact 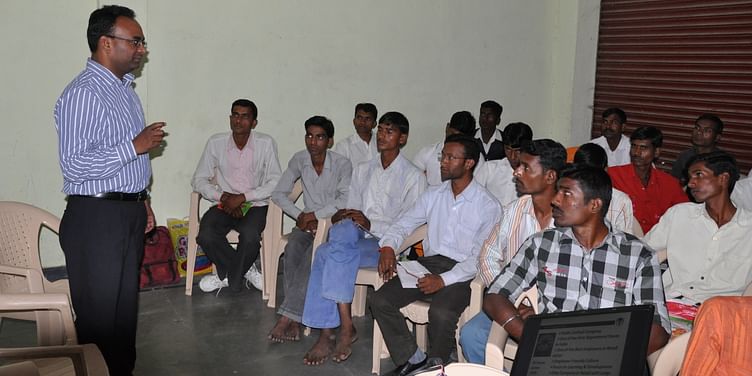 I had the privilege of speaking with a senior Indian Air Force officer a few days back and I was very interested to know what patriotism meant to him. The answer stumped me. He said, “The defense forces are born out of fear of man’s dark side. In an ideal world, we shouldn’t exist. As far as India is concerned, there is a far greater problem. We have a demographic bulge, over 60% of our population is under the age of 25 and we don’t have the educational infrastructure that can make them eligible for a job. And jobless youth are this country’s biggest bane.”

What he said after this shook me even more -- “You want to serve the country? Give one person a job for his life and you would have served it more than I have.”

While these words were running on the back of my head, I spoke with Niranjan Waghmare, an IIT B alum and the founder of Vertois Training, a startup that is looking to make youth from the bottom of the pyramid more employable. But it is not pure service that’s on Niranjan’s mind, he understand the business value and opportunity that exists in that space.

The homecoming and starting up

Niranjan spent most of his professional life abroad, so much so, that he’s a citizen of Britain and an overseas citizen of India. Three years ago, he came back to India as the head of an American company: “I’ve been in the IT/BPO industry for almost 16 years now. About two years ago, I decided to leave my cushy corporate job to try and generate wealth through a social cause.”

This led him to start Vertois Training in late 2011; a company that helps the youngsters in small towns to be equipped with skills that can lead to their employability. The company is headquartered in Pune, with branches in Solapur and Mumbai. They plan to open 3 more centres in Nagpur, Aurangabad and Kolhapur in 2013. “Our focus area is youth at the bottom of the pyramid. On one hand we train youths from tier-II, III cities and rural areas and put them in jobs and on the other hand we create trained talent for entry level jobs in India’s vast services industry,” says Niranjan.

The startup offers courses for students in high school, undergraduates, graduates, right through to MBAs to prepare them for jobs in India's growing services industry.

There is no denying Niranjan is making a difference to the lives of many youth in small towns, but it is the sheer size of the market that makes a lot of business sense. There is a big need versus demand gap and if done well, such a business will always have a market in India. (Here is a similar business)

Even the government recognises the need that exists in this space. Its apex body, the National Skill Development Corporation has been toiling hard to improve the employability of youth at the bottom of the pyramid. In this year’s Union Budget, the finance minister also set aside Rs 1,000-crore to encourage youth to voluntarily enroll to skill development institutions. Vertois Training is one such institute that stands to gain from this decision.

Talking about the business opportunity, Niranjan says, “The Indian non formal education sector industry is $11.5 BN in size which includes providing additional skills and knowledge to support the formal education. Furthermore, the Indian Govt has set a target to skill 500 million people by 2022, for

which government has added a another $500 million, under various ministries.”Promising traction despite challenges

The revenue model for Vertois Training is the fees they charge individuals for their services. But Niranjan is faced with a trust problem. He says, “There have been quite a few con men who’ve come to our target audience with the promise of a job. Once they’ve got their payments, they’ve gone absconding. Getting people to trust you is one of the biggest challenges. We’ve used locals for marketing, and our track record also helps.” Vertois Training has placed 120 people in 2012 in the retail sector with big brands like Big Bazaar & Shoppers Stop and have recorded 100% employability of the people trained by them.

However some of them declined their offers, which is another major challenge that Niranjan faces. He says: “Young people who’ve grown up in their villages and small towns aren’t comfortable moving out of their hometowns. They are ready to settle for a smaller job, if it’s in their hometown. Convincing people to come out of this mindset is more difficult.”

The more apparent problems such as training and operations don’t worry Niranjan much because of his experience in the field. He has set a target to train as many as 7,000 people through Vertois Training by 2014.

I wonder what the Air Force Officer would think of Niranjan.