10 years, 50+ outlets and going strong, a look back at Sequoia funded Faaso’s growth 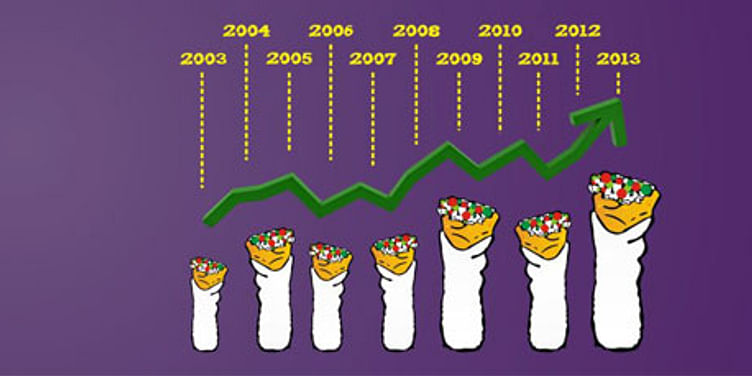 If you’ve ever been in Pune or Mumbai over the last few years, it’s hard to miss out on the yellow and purple little outlets or the spirit lifting vehicles scooting around. These outlets and delivery vehicles are a QSR chain, Faaso’s, that serves wraps and roles with an Indian twist. Jaydeep Barman, an IIM-Lukhnow alumnus, co-founded Faaso’s in 2003 inspired from the kathi rolls of his home city, Kolkata.

Starting out from Pune, Faaso’s started out slowly but gained in momentum and went on to raise $5 million from Sequoia Capital. We have kept a keen eye on this fast food chain and here we get in touch with Jaydeep to check on the growth.

Growing from a single store in Aundh, Pune, Faaso’s had 18 outlets in 2011 when the funding came in. This was also the time when they introduced the entrepreneurship in residence program. Since then, the curve has been steep upwards and currently, the company has 53 outlets across Pune(18), Mumbai (32) and recently launched in Bangalore (3).

“It takes a lot of time to identify a location. But once that is done, it takes 20-30 days to setup a store and gett it running,” says Jaydeep. Setting up stores at the rate of around 3 a month, the plan is to reach 80-90 outlets by the end of the financial year. 80% of the stores become profitable in 2-3 months.

Currently, Faaso’s employees around 750 employees across its stores including delivery boys, chefs and management staff.

Why franchising didn’t work and what they did instead

Faaso’s tried out the franchising route in Pune but it didn’t really work out. “We had 6 stores in Pune but there were a lot of clashes that came about. This is mainly because Faaso’s is still not that big a brand,” says Jaydeep. These 6 stores still operate but under a different name - Eatsome.

What really worked for Faaso’s is their Entrepreneurship in residence program. This model invited individuals to take up the responsibility for running a store completely. After the initial hand holding, the entrepreneur is responsible for the entire P&L of the store. “We got more than 2000 people who were interested for the roles and we’re seeing some really interesting people coming in,” says Jaydeep. Most of these people come from an engineering+MBA background.

Faaso’s has invested heavily in technology and setting up the unit economics properly. “Each wrap we deliver is tracked from the kitchen to the point we hand it over to the customer,” says Jaydeep. Faaso’s is also in the data game. Looking at the user patterns and tracking user metrics, they’ve been able to modulate according to their users. For instance, Faaso’s keeps a track of what each customer is ordering, at what times, and at what frequency. If a person has not ordered for 15 days, they go back and check if there were problems with the past deliveries. “We try to increase our repeat rates as much as possible,” says Jaydeep.

Another curious trend is ‘booking online’. Online booking is picking up but still, in Pune, delivery is 50% while in Mumbai, delivery is 65%. “This is also because the stores are smaller in Mumbai,” says Jaydeep. The size of stores often decides how people order. Faaso’s also takes order on Twitter and for all such steps, a high reliance on technology backend is essential.

Jaydeep has been in the space for a decade now and there are some key points any entrepreneurs planning to startup a QSR chain should keep in mind:

1)     How do you keep up the entrepreneur morale at individual level. It is of utmost importance to keep every store manager motivated and make him believe how the store completely relies on him (which is true).

2)     Communication. Jaydeep candidly says, “We really don’t know much about the space. I had no clue before we started out and hence we’ve done things differently.” Faaso’s maintains this humorous feel along with a core focus on customer satisfaction.

3)     Supply chain. This of course is the base for any QSR. Setting this right is what will decide the direction of the company.

Faaso’s is on booster power at the moment and is looking to expand into other cities after Bangalore as well. The debate is on between North India and going deeper within Karnataka.

If you’re in Mumbai, Pune or Bangalore, do try them out: Faaso’s.

Recommended read: So, you want to startup a restaurant business?

Techsparks 2013, the largest technology product startup recognition platform of India KickStarts on May 18. Join us for this 7 city startup extravaganza!