Dear frequent traveler whose mobile phone is always running out of charge... Have you tried the Lumos Backpack yet? 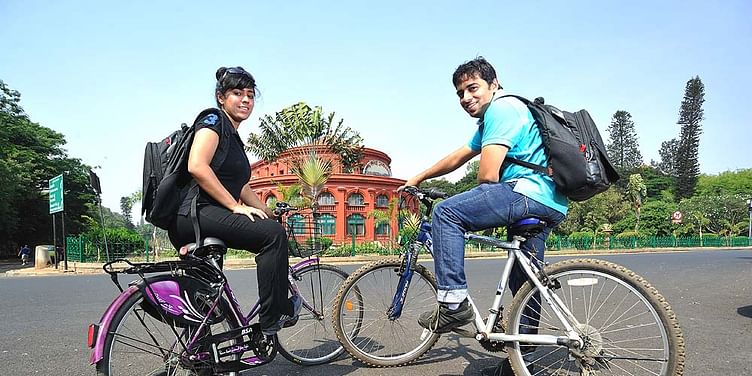 Opportunity presents itself to the most unlikeliest of people. Take Lumos for example - A b-school graduate and his designer wife who decided to ride the fabric-technology wave and make solar powered bags. Unusual combinations like these are commonplace in the Indian entrepreneur space.

However, when you speak to Gandharv Bakshi, he exudes a warm sense of free-spiritedness which really endears you to his venture. Suddenly, this unusual combination looks... logical. From my interactions with Gandharv, I think it is safe to say that he's the quintessential entrepreneur - a curious doer. Powered by his co-founders' collective domain expertise, Gandharv is out to solar bags a common sight in India and abroad.

Born out of a salesman's strife with chargers

Gandharv is an IIM B graduate. But his entrepreneurial nature made him start a company offering consulting services while at college itself. He says, "We started a company that would help industries with performance metrics. We used to have a lot of projects at the end of every subject that we did. We used to do a live project with a client and use that in our academic projects. While we had to complete projects in spans of 3 months, which was cutting it a little short, but we got a lot of exposure."

Gandharv was the sales guy in the trio that worked on the consultancy firm. He says, "I used to travel quite a bit and I would invariably find myself in a sticky situation trying to find a plug point at the client's office. I tried all sorts of mobile, on the go chargers, including solar ones. None of them really integrate naturally with our day to day activities."

The team - A designer's spark, an engineer's solidity and the love of an entrepreneur

Gandharv's wife, who is also his co-founder is a designer who suggested that a solar panel can be

embedded in a bag which can be used to power a charger. Gandharv says, "A lot of the business idea was influenced by her because she has been monitoring this space for a while. The first bag was actually stitched at home. I learnt soldering from the internet and we made a first working prototype. It worked, but only under direct sunlight."This would prove to be a problem that would require an electronic's engineer mentorship to overcome. "We had a guy who was mentoring me on a casual basis on electronics and recently he too came on board to help us out on the electronics side of things."

And Gandharv, opted out of placements at IIM B. He says, "We already had the consultancy thing going on, and the Lumos idea was really interesting to work on. Honestly, once you're into entrepreneurship, you really can't get out. My deferment period is over, but then again, why would you go back to working after starting up?" he quips.

Lumos's biggest challenge came with manufacturing side of things. Gandharv shared that manufacturers do not like working with startups. He says, "Manufacturers like stability and they do not get it from startups. We could finally zero down on one guy who was ready to work with us. But the quality of the bag that they produced wasn't all that great. Along the way we learnt a lot about how bags are made and made a conscious effort to not compromise on the quality of the bag." Gandharv further added that this process of prototype to production took Lumos almost a year. But in the process, they've patented the electronics on the bag.

At a recent NASCOMM event, Lumos raised an angel round from Google India MD, Rajan Anandan. The size of the investment was 25 Lakhs, in return for 10% equity, which would be raised to 15% if the company failed to make sales worth 60 Lakhs in the coming year. Gandharv believes that this is an achievable target. He says, "I started off as a B2C offering, but after we started getting some visibility, we started generating interest from corporates. We now provide a corporate gifting solution, which is working out at a much faster rate than the B to C offering."

In the coming months, Lumos is launching a new model of the bag, which would include a display which would give them data on the amount of solar power generated. This would be integrated with the website, and we'd play with leaderboards and carbon points etc. That's of course after the launch of the bag itself."

Gandharv also has plans of expanding towards the west, where such a novel product might see some more acceptance. But it is really great to see such startups coming from India; Starting up is a challenge in itself, let alone starting up in uncharted territory.

How will things span out for Gandharv and co at Lumos? With sound business backing an innovative product, the future is in the name.