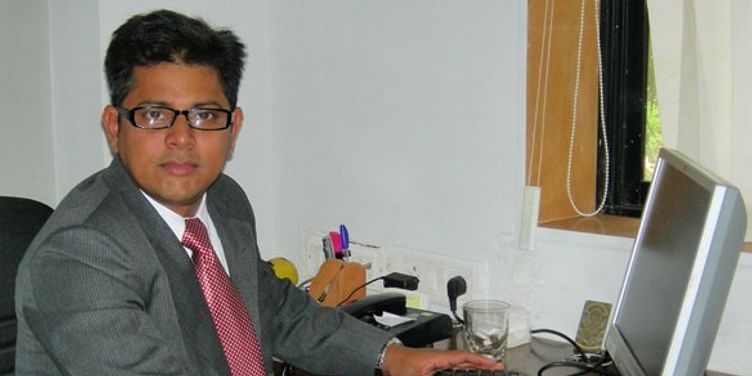 If necessity is the mother of invention, then adversity in some cases has been the reason for entrepreneurship. And in case of Sudheer Nair, founder & CEO of Eresource Infotech, adversity brought out the best in him. Coupled that with sheer grit and conviction has helped him lead a Rs 81 million ERP firm today.

Sudheer’s is a classic tale of rags-to-riches. He comes from a lower middle class family, and does not have any ivy-league credentials to attach with his name. He had to discontinue his higher studies at the age of 16, due to sudden demise of his father and following financial problems. The situation forced him to search for jobs to support his family. Initially he ended up doing odd jobs, which included that of a helper’s job at Sahar Cargo Complex, Mumbai. But the enthusiasm he had towards life and the wish to progress in life, has made him what he is today. On few occasions, documentations were required at the Cargo Complex and that was Sudheer’s introduction to the typewriter, eventually transforming into an expert typist. Next Sudheer took up the job of typing programs for a programmer and looking at his ability to learn fast, Sudheer was given an opportunity to learn computers. Slowly from typing programs for a programmer on a daily basis, he started generating software codes independently for the company. He loved what he was doing and made him learn the subject at a deeper level.“Someone has said when god is shy to announce his presence he comes in a form of chance. That chance was given to me, when somebody asked me to type Bill of Lading at Sahar Cargo complex. You need to start from somewhere. Dr Abdul Kalam started his career as a newspaper boy.  Once you have the determination and will power you always move forward. I took the loading job because my family financial situation demanded that. It was a short stint. I knew I had to move out. Life must be like a flowing river. I believe in that and still am living with that spirit,” says Sudheer of the beliefs that have shaped his life.

Sudheer never enrolled for any formal course in computers, but says he was extremely lucky and blessed to have met incredibly talented people in his life and a chance to hang out with them. “I did not know any technical people and had zero guidance. But the way I chose was to ruthlessly read through technical books. I spent hundreds of hours reading and practicing programs,” recollects Sudheer.His entry into the field of ERP was also by chance. While working with Afternoon daily in Mumbai, he had developed a smaller version of ERP for the daily. That gave him the confidence to start on his own and ERP was his obvious choice to startup in. But before he did that, Sudheer worked for 15 years in Dubai as a software professional. He started as a software developer and was the Senior Enterprise Manager, when he quit. “It was a 400-million-dollar company and I was working on enterprise solution and you learn a lot in the process,” he says.

When he started Eresource Infotech in 2006, the ERP market was worth $14 billion and Sudheer saw enough opportunity in the space. “The urge to do things on my own was getting on my head and that feeling forced me to quit my job in Dubai and startup,” he says. Sudheer started by bootstrapping and with the support of Vivek Jingade, who now heads the sales and marketing for Eresource Infotech. “Vivek has been with Eresource since inception and without him we could not have achieved what we are today,” credits Sudheer.

He started with a small team and today Eresource has over 100 employees, across a variety of functions. Sudheer says he never had any problem in finding talent, even as a startup. “I don’t think there is any shortage of talent in Mumbai. What is important is the selection process -- getting the best from the lot,” he says. Today the company has over 300 clients and about 25,000 users on Eresource ERP. A majority of their clients are from India, particularly Mumbai and Northern states; they also have many clients in Middle East and few other Asian countries.

The biggest player in the ERP space is SAP followed by Oracle, so Sudheer decided they would try and play the cloud card. “We have everything that our competitors can offer, and while some of their solutions may still reside on a local server, Eresource is 100% web based ERP solution. Our competitors don’t really care about localization, but we make sure our solutions can cater to requirements needed as per Indian statutory and regulatory needs,” explains Sudheer.

Eresource is now launching ‘eresource ExV2’ (eresource Express Version 2) – a new release of Eresource. “Eresource ExV2 will have compatibility with hand held device, mobile and would be technology independent,” says Sudheer. Eresource currently works with about 80-90 channel partners where 8 are affiliate partners, while the rest are referral partners. Sudheer says their customers love them because they undertake the entire implementation and post deployment activities and responsibilities. “We engage with our customers at great lengths to understand their requirement and then accordingly package the solution and deploy it. This has resulted in zero failure rates,” claims Sudheer proudly. The company is looking at appointing partners in each geographic region with and has plans to appoint about 30 channel partners, which will help them scale up.

Looking back at his journey, Sudheer admits it’s hardly been a bed of roses: “I cannot pin-point the difficulties I have faced to set up this company. There are numerous.” Though financial problems are on top of list, Sudheer considers his biggest capital to be the talent at Eresource. Over the years Eresource has won many prestigious industrial awards, including the Udyog Rattan Award and Business Excellence Award for the year 2008. They were also conferred the Business Leadership Award by Institute of Industrial Development, New Delhi. And the venture has been recently rated by NSIC-CRISIL and awarded SE 3B.

As for the formal education that he couldn’t complete, Sudheer says he reads a lot. “I am getting myself educated through my experience. And that is the best education you can ever get,” he says.