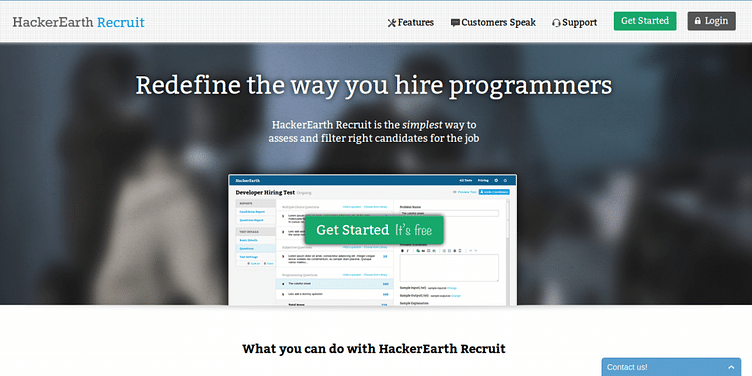 While HackerEarth was known to be a competitive coding platform (previously known as mycareerstack), it also had an enterprise facing solution. The proposition to its clients was to provide an effective way to hire programmers. They built the bare bones infrastructure as college-goers in IIT Roorkee and ran many pilots (what they call Hiring Challenges) with companies like Capillary, InMobi etc. The tests were administered in an ad hoc manner and their products were not available as an integrated solution; until today.

HackerEarth today announced the launch of HackerEarth Recruit - a SaaS based hiring platform for computer programmers. Akin to InterviewStreet's recruit, a user can signup, create programming tests, which can consist of subjective, MCQ or a coding challenge, and send invites to candidates to take them. HackerEarth co-founder Sachin Gupta said, "We've now moved to a full SaaS model and now users can come directly to the site and set up effective tests without much manual intervention from us." Sachin did share that their popular onsite hiring challenges will still be on.

A free account on HackEarth Recruit offers 30 free invites to a user for tests that he or she can share, post which, invites will be charged. Cost of invites starts at Rs 125 and goes as low as Rs 100 based on the number of invites you buy.

How is this different from Interview street recruit?

On a broad sense, it isn't. Both these products offer a great way to eliminate substandard coders and sieve out the good ones. While Sachin Gupta agrees with this to an extent, he believes that the way the two platforms go about doing this is quite different. He says, "We're looking to be more than just a tool. With HackerEarth recruit, we're looking set a recruitment process. Furthermore we're looking to make setting tests easier for non-tech people as well."

The latter truly is an interesting proposition. But is HackerEarth recruit easier to use for a non techie? Well, I'm a pseudo techie and here's what I think -

The way the sales pages of both the sites are laid out are not very different to each other. Upto the point of actually setting up the questions, there aren't many differences between HackerEarth and InterviewStreet. But once you've created a test, when you choose questions from a library on InterviewStreet, it would require the person setting the test to have some amount of programming knowledge.

This is where HackerEarth was different. Along with being able to set my own questions, it also gave me a choice to automatically generate a questionnaire. In this option, HackerEarth recruit gave me choices on the kind of programmers I wanted to hire (front end, back end, UI/UX etc) and upon making a choice, it generated a preset list of questions. The number of questions was automatically decided upon by the time limit of the test, which again I found missing on InterviewStreet.

Of course, you could add your own subjective test questions to the list, but on the whole, I found HackerEarth to be a lot more noob friendly. A first time user, with little understanding of programming can set a competency test, fairly easier than that on InterviewStreet.

It is a ready product, and now the focus for HackerEarth would be to sell it. Given the messaging and the currencies used on the site, it looks like HackerEarth is looking to target an Indian client base. And selling a SaaS product in India is not the easiest thing to do.

Sachin also shared that there will be some interesting products that will accompany HackerEarth recruit in the coming months, which would provide a complete recruitment solution for companies. And given the user centric approach they've taken with recruit, i certainly look forward their next product.

Give HackerEarth recruit a spin and tell us what you think