“Nothing in the world compares to a spirit that stands tall” – Kutle Khan at TechSparks 2013! 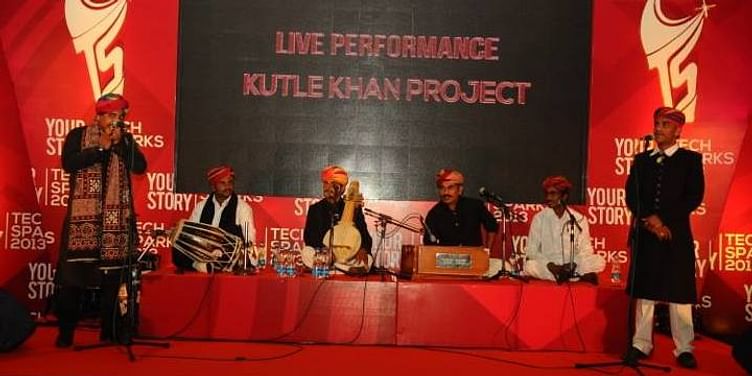 The annual startup Oscars – YourStory’s TechSparks – ended in fine style this year not just with an awards ceremony for the Top 30 Indian startups, but with an outstanding musical performance by award-winning Rajasthani troupe, Kutle Khan Project.

Their exhilarating performance was the perfect climax to a day of discussion about taking local talent global, and what it takes for a team to continuously innovate, succeed in the long term and open up new turf.

After all, that is exactly what this band from Rajasthan has been doing for two decades: building on local folk heritage foundations, blending it with global musical sounds, and travelling around the world to the joy of fans across the planet.

In an interview after their performance, Kutle Khan said: “Nothing in the world is compared to a spirit that stands tall, emerges on its own strength without drawing anything from others, but in turn partaking in a process called entrepreneurship that leads to inspiring stories of independent minded people and their spirit.”

Entrepreneurship is a fine example of human courage and belief in self and efforts towards pursuing passions, a place where dreams have their say, concluded Kutle Khan. The troupe then set off for their next gig at Opus, and on to Mumbai.

Kutle Khan is a formidable wooden castanets player as well as a stunning performer and multi-instrumentalist. His compositions embody the rich melodies of Sufi music combined with the traditional folk music of Rajasthan. Kutle Khan has performed in almost 50 countries and has also collaborated extensively with UK-based Susheela Raman as part of their OuterIndia initiative.

The group was clearly delighted with the TechSparks finale as well, and said the conference and startup showcase was “well managed.” They added: “The event was excellently executed, with a fabulous team heading it, shouldering it and making it worthwhile for us to be a part of it. The Kutle Khan team would like to thanks Techsparks for inviting us and have us perform for them. The audience reception was warm, and we enjoyed the dancing especially in a startup event!!”