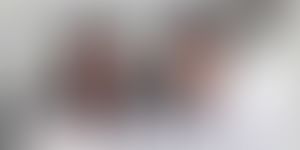 While looking at the admission list at Times School of Management notice board, Gagan Jain was a bit shy and had butterflies in his stomach as he saw the name of a jain girl also in the same batch. Little did he know that this is going to be a ride for his life.

They were classmates, used to work on the same project as a part of a team. When they passed out they were not on talking terms with each other. While Neeti comes from a well-to-do family, where freedom and learning were greatly emphasised upon, Gagan had a diagonally opposite past. He had to leave home to work as his father was on the verge of bankruptcy and he had to join English classes to learn English (It seems Gagan has improved a lot as he co-authored his first book;-)).

As they passed out and went their own way, destiny had other plans for them. Both of them were placed with Times of India but at different locations, soon they changed jobs and Gagan started working for Landmark Retail in Dubai, while Neeti joined Lowe Lintas & Partners in Jaipur.

Story of a Denim, RangRage and The Start Up Diaries

In August 2011, they were planning to write a book. But just like any other idea, there were more critics than supporters, people started telling them to improve their English, start from a blog etc…So they put the idea on hold.

In Oct 2011, Gagan had to visit Paris for a fashion conference and to make sure that he doesn’t lose on the fashion quotient, Neeti hand-painted a denim for him. Gagan says the denim was a head turner and everybody stopped doing what they were doing and looked at Gagan appreciatively when he visited Eiffel tower wearing that jeans. Gagan immediately called Neeti and shared the joy. Thus the idea of RangRage was born. They did a pilot using few hand-painted t-shirts and saw returns up to 10x. As a result they built RangRage, an eCommerce platform which sells hand-painted merchandise thus promoting local painters and talented young artists to reach their commercial potential.

While building RangRage, Gagan also spoke to one of his friends about the book who said,

and it inspired both of them to start working on the book again. They wrote to around 50 entrepreneurs, heard back from 8 of them and finally featured 6 entrepreneurs (Read the book to find out who were they). It took them around 2 years to finish the book and get it published.

Couples starting up is not something which we are witnessing recently and has been an old phenomenon.

We wish them a great future.

Read the review of The Start Up Diaries here and visit RangRage here.

McDowell’s No. 1 Platinum respects Leaders like Gagan and Neeti who took the unbeaten path and also inspired more people to follow their dreams and join them in their unconventional journey.