How to ride a green bike to success 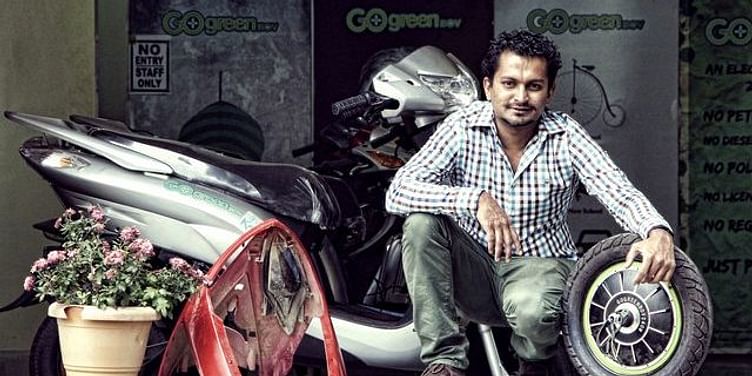 Green bike maker Dhivik A doesn't react like the rest of us when he sees the latest headline on a fuel price hike. "While it gives palpitations to everybody else, it makes me very happy... When others are cribbing, I am rejoicing," he says.

Dhivik knows that rising fuel prices will give a boost in demand for his Go Green BOVs (battery operated vehicles). But it is not just the thought of making money that gets him excited about this.

Riding on his electric bike on the busy MG Road in booming Bangalore, he often thinks about the unfairness of it all. He sees the shiny red car parked in front of him at a traffic signal, spewing out deadly heavy metal-laden fumes. Then he tries to calculate in his mind just how much of the government's INR 18 lakh crore (around USD 286 billion) annual oil subsidy the vehicles around him are consuming. Without that subsidy, how many of these people could've afforded to drive petrol and diesel cars? Dhivik looks at his Go Green BOV bike: no emissions, no sound, but no incentives either. That's what gets his goat.

For all the lip service paid to green initiatives, he has seen precious little concrete action. A 20% rebate on purchase of electric vehicles announced last year had seemed promising but even that was withdrawn after around six months.

The signal turns green and Dhivik cruises into the flowing traffic, his bike looking no different from the other sleek scooters on MG Road. How different it was at the start, back in 2010, he remembers. The bike’s first avatar was puny and light, modelled after a German cousin. But what a disaster it had turned out to be! He smiles to himself on recollecting how the first 15 customers demanded their money back when their bikes broke down. What have I done, he had thought.

Then the real work began. He realised it was going to be much more complex than reverse-engineering a German product. He would need to draw upon wider expertise to make the bike robust and suitable for Indian conditions and consumers. It was one thing to be an entrepreneur with a great idea, but effective execution would need something more. The most vital inputs came from his dad's friend who had just retired from Pratt & Whitney (US-based aircraft engine-maker). What followed were fundamental changes in concept and design.

Firstly, for their target consumer in the mid to lower segment of the middle class, this would have to be the primary vehicle. That meant it had to be sturdy enough to carry the kids to school or bring the shopping back home or go on a family outing. And to be able to do all that the bike had to be larger and heavier, even if that increased its price. In looks too, it had to match the other motor-scooters in the market in meeting the aspirations of the middle class consumer. That is how the bike Dhivik was riding on looked no different from all the others on MG Road that day.

But an even more fundamental change had to be made internally. He would have to explain this to the journalist he was meeting in the evening, he reminded himself.

Of lobbies and incentives

Sitting in an open-air restaurant in UB City, the poshest mall in Bangalore, waiting for green entrepreneur Dhivik, my mind ran over the countless green events I had attended. I thought of all the pro-green speeches I had heard from activists, socialites and politicians alike. Why, if I were to ask any of these well-turned-out diners around me, they would also express concern for the environment. But I knew the reality was something else.

Unlike in the West where green goes with haute couture, electric vehicles aren't yet fashionable in India. We have just one Indian electric car maker, and there are about 11 electric bike makers like Hero Electric, Yo Bykes, Ampere, Lohia Auto, and Dhivik's Go Green BOV. Presently, about 17,000 Go Green BOVs ply on Indian roads. Dhivik's last fiscal closing was at Rs 31 crore and the current year is likely to see his firm joining the Rs 100 crore league. But the numbers are still tiny in relation to the mammoth auto industry.

It is expected that by 2020, the annual demand for passenger vehicles, commercial vehicles and two-wheelers in India will be 10 million, 2.7 million and 34 million units respectively -- making India the third largest vehicle market in the world. India's oil imports have gone up from 57% in 1997 to 85% in 2010. And it is expected to reach 92% by 2020. This is why the National Mission for Electric Mobility (NMEM) was set up months ago by the government. While releasing the NMEM Plan 2020, S Sundareshan, Secretary, Department of Heavy Industry, said the main objective is to ensure India's energy security by fuelling the growth of domestic manufacturing capabilities in the full range of electric vehicle technologies. The plan includes a total investment of over INR 23,000 crore (USD 3.6 billion) to be equally shared between the Government and the automotive industry.

So far, all this is only on paper. Would any of this actually take concrete shape to encourage green entrepreneurs, I wondered as I observed Dhivik, a smartly-dressed 30-year-old, approaching my table. As he rolled up his sleeves and pulled out his MacBook, I asked him what the biggest obstacle was before him. "The petroleum lobby, of course. From a manufacturer of bearings to a maker of springs, everything that goes into a petrol or diesel vehicle works against us," he said.

There is little he can do about that, he went on. He has concentrated instead on improving his product to make it more appealing to consumers. One of the key problems he had to solve was what he calls “range anxiety”. This refers to the fear of being stranded midway if the bike's battery runs out. So Dhivik and his team worked on the battery and related technology to double the bike's range from 50-60 kilometres per charge to 100-120 kilometres.But even with that improvement, it is not an ideal scenario. One big reason why electric vehicles haven't yet taken off in India is that there are hardly any charging stations. "It's a chicken and egg situation really. Electric vehicle buyers want more charging stations and charging stations want more electric vehicles," Dhivik said. This is another impasse that Dhivik can do little to resolve, other than increasing the range of his bikes. It is really up to the government to tackle this, if it is committed to the NMEM Plan 2020.

Right now, there are only a few small mercies. Electric bikes like Go Green BOV do not require a license or registration, nor is there a road tax. Dhivik remains optimistic that more substantial incentives and changes in policies will come sooner rather than later for green entrepreneurs like him. He is also quietly satisfied with the progress he has been able to make despite the many obstacles.

He remembers how it was in the beginning. He would wake up at four in the morning to catch newspaper vendors at their distribution points. He would sit with them and insert pamphlets about his bike into the papers one by one. His team of six would then take a short coffee break and head to Lalbagh to catch the morning walkers. People who went to Lalbagh for fresh air would also be receptive to a green bike; that was the idea.

Dhivik has come a long way from there. The man sitting in front of me had built a startup considered one of the most promising by TiE (The Indus Entrepreneurs). Investors are chasing him, enquiries are coming in from Brazil, the Philippines, Sri Lanka, Australia and East European nations, and his bike has already travelled out of Karnataka into five other Indian States. The future looks green.