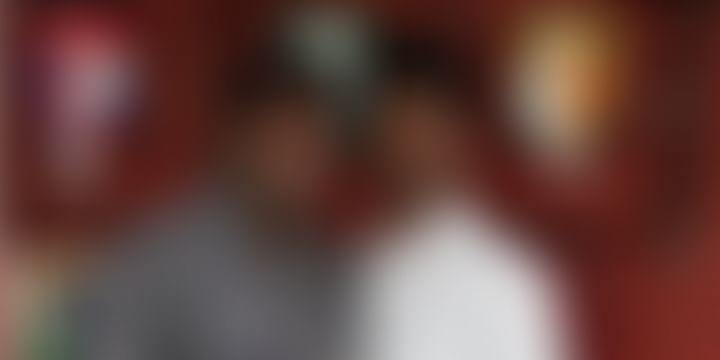 Bangalore is a monster of a city. Although it has all the rights to boast a great weather, the city has not been lucky enough with traffic which is a big pain and many a times, residents long for a quiet spot. Tucked away amidst the hustle of Koramangala is Tuck Shop, a cafe founded by two enthusiast hotel management graduates, Ahmed Sharif and Mayank Agarwal.

A cafe in a garage

Ahmed and Mayank have always been into cooking and something they thought they'd like to pursue after passing out of college. Interning with the Sheratons of the world, the duo realized that they had to do something of their own that'd satisfy themselves. “We had a great experiecne with these hotels but we wanted to experiment with something else,” says Mayank.

The Tuck Shop Cafe was started with this intention of having a local burger joint. “The regular burger places are the KFCs and McDonalds of the world, we needed something local like this,” says Varun Agarwal, the entrepreneur behind Almamater and the author of 'How I braved Anu Aunty and co-founded a million dollar company' whom I met at the cafe. Varun is the elder brother to Mayank and was also an inspiration for the duo to startup.

The Tuck Shop has lovely interiors and being converted from a garage, it gives a nice cozy feeling. The cafe has become a hangout place for a lot of youngsters and is gaining in popularity as it recently crossed the 6 month mark.

The hassles and the growth“It was really tough to get the permissions and licenses to get the ball rolling,” says Mayank. They had a hard time convincing the residents around but the plot being a 'commercial' one, they finally got their way. After two months of back and forth, The Tuck Shop managed to serve its first burger.

Apart from Mayank and Ahmed, they have three other cooks who help to run the show. “We haven't hired any professional chefs. We asked our home chef and trained him and a couple of others to come up with our team,” says a grinning Mayank. “The plans are much bigger. We want to get into various kinds of food and give the audience a taste of something new,” he adds.

The Tuck Shop has grown from 100 burgers a month to begin with to serving over 700 burgers a month now. The plan is to get a few more stores in Bangalore and then take it up from there (here's how to setup a restaurant).

Defnitely one of the largest industries in the world, people are always going to look for food and places to eat. The humungous Zomato valuation is a testimony to this fact. There have been a few QSR chains that have bloomed from various parts of India like Mast Kalandar and Ammi's Biryani from Bangalore, Faasos from Pune and obviously the cult of CCD. A space of volume, the game is won in this space by setting the unit economy right and then scaling it up.

More about The Tuck Shop on the Facebook Page.

Also read about the first vegan restaurant of Bangalore.