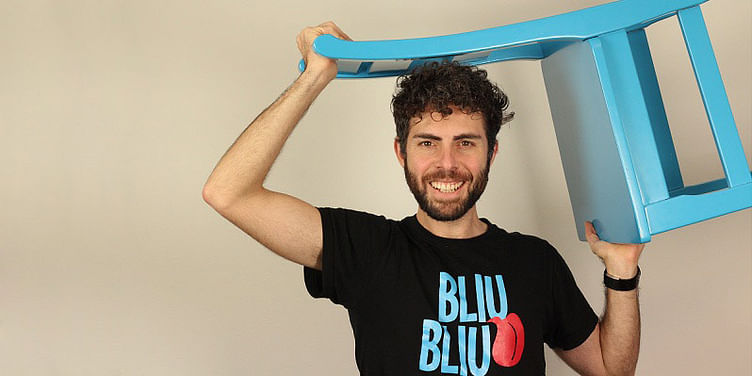 Caludio Santori founded BliuBliu after feeling frustrated with the traditional approach to learning languages. BliuBliu adapts to a user’s interests and comfort level with a language. Its dynamic approach only highlights terms, curates videos and brings content that a user is unfamiliar with, but interested in knowing. What’s more – users can sign up to learn and teach simultaneously.Curious about the name? Claudio says it was born from a combination of two factors - first, inspiration from Eben Pagan's philosophy that a brand should be on the top of every list so its name should start with 'A', 'B' or from the bottom, 'Z.' And second, from an episode of the TV show 'Friends' where its character Joey Tribbiani is trying to learn French.

Claudio tells YourStory the story behind BliuBliu. Below are some edited excerpts from that conversation.

YS: You’re originally Italian. How did you make your way to Lithuania?

Claudio: I am 100% Italian, but I moved out of home when I was 19 (not common in Italy) and at 26 I moved to Helsinki, Finland, because I was very taken by the natural beauty in that country. I love nature. At 33, I fell in love with a girl and moved to Lithuania.

I got a degree in Economics in 2004 and came close to getting a Bachelor of Science in Communication in 2006. I have always been passionate about IT and since 1997 I have been working with small enterprises creating their website and curating their web-marketing strategies. I have also been a tourist guide, a dance teacher and I wrote a few e-books about productivity and finding a job.

YS: What made you create BliuBliu? Why did you decide on a language startup?

Claudio: I didn’t realize I had a commercially viable product until a friend pointed it out. Till then, I just thought I had the best idea to learn languages.

While I was studying Lithuanian and trying all the different services available, I noticed that something big was missing in the language-learning market. There was an absence of local stories to make learning easy. I came across a story in my grammar book about a kid going to the countryside to meet his grandparents; I loved it. A thought struck me – surely thousands of stories like that should exist already; as a learner I could enjoy reading them with a few unknown new words interspersed in the text, instead of studying boring exercises. But the problem was I did not know where to find these stories. And that’s how BliuBliu was born.

I have been learning languages for more than 25 years now, networking with bloggers and reading whatever is available. I have been using all my competitor products long before I knew they were going to be my competitors. It’s a market that I now know quite well.

The idea began to form in my mind in 2012, as soon as I started studying Lithuanian. It took a phone call to convince a friend (Stefano) to lend me 5000 euros and start hiring developers to create a prototype. My friend, Marc-O, came on board in the early days as CTO to help out with the technical aspects. It started slow but in November 2012 we won Startup Weekend in Vilnius and received a lot of attention. The big break, however, came in February, 2013, after we won Techchill in Riga and were mentioned in ‘TechCrunch’. Investors started calling us. We picked an angel investor from Lithuania and in March 2013 the company was created with five people working full-time on BliuBliu.Unfortunately for me, Marc-O left a year after he’d joined. When you have a family to sustain it’s hard to play with a startup that doesn’t generate any money. But he is still part owner of the company and consults for us when time permits.

YS: How did it feel to be working on something of your own?

Claudio: When I decided to quit my day job and dedicate myself 100% to this project, I was a little skeptical whether it was a financially wise decision. But with all my focus on a single project, it’s been paying back. My family and friends were already used to my impulsive, crazy temperament. When you move to Finland because you like nature, and then move to Lithuania because you fall in love with a girl (using up your bonuses to sustain yourself), people are not so surprised by you anymore. So when I decided to pursue my idea, I think they actually expected me to do something crazy like this. And this helps if you work in a startup!

YS: Tell us a little more about BliuBliu – what exactly does the product do?

Claudio: BliuBliu wants to help people learn languages, but in a fun way. When I started learning Lithuanian, my biggest challenge was finding content at my level of understanding. I was studying a lot, completing homework and reading, but that didn’t seem effective. I could only understand a few lines in a conversation, a paragraph in an article, a few things here and there. Then it hit me – the Internet could possibly host content already at my level.

BliuBliu matches a user with the right content, at the right level and brings about learning through topics of interest to the user. It’s similar to having locals speak to you round the clock, at your level, making it easy to understand. It highlights words that may be alien to you, thus focusing on new learning each time. BliuBliu also allows users to sign up as teachers and facilitates community-based learning especially now with its new chat functionality. (See the founder explain the concept)

At the moment we are targeting intermediate people with a prior education in the language, but soon we will jump into the beginner’s market. We are also conducting pilots with some companies, and their employees seem to like the system.

We are trying something completely new, using real content on the internet to create a flow that will help a user learn a language while keeping him entertained.

YS: What is your revenue model?

Claudio: The present model we’re trying is interesting. We provide monthly subscriptions. But people can still use the product for free. They just need to justify why they are not paying. Premium users can name a price that could be different for every user. I know this sounds crazy. But our focus right now is more on testing the model and ensuring maximum fun and results. We will then decide on a good pricing strategy at a later time.

YS: How many users do you have? How do you plan to scale?

Claudio: We have 40,000 registered users. We engaged the blogger community and with every review, came a thousand new users. We had lot of beginners who did not see value in the product (they are not our target audience, at least not yet). But users at the intermediate level loved it and sent amazing testimonials. Reviews in ‘The Wall Street Journal’ also helped tremendously.

In March 2013, we received angel funding in Lithuania and then earlier this month, we received another round from a Finnish angel investor. We are slowly growing our team and adding new developers. But before we scale, I would like to ensure that I build a strong core team. While building a product, it is also important that you take the time to listen to the customer.

BliuBliu was one of the many startups that participated in the Slush 2013 conference last year.