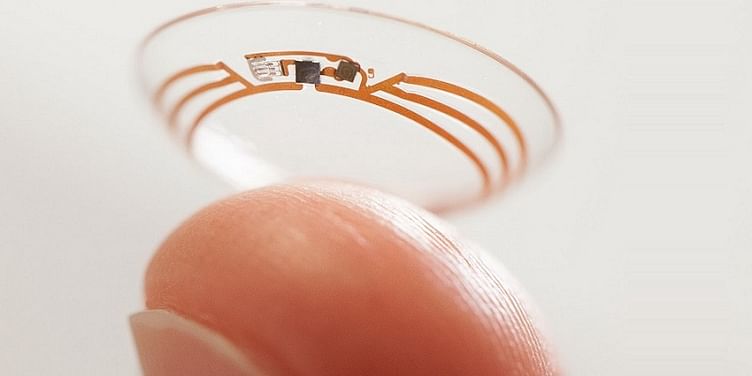 Diabetes is the scourge of modern times, affecting one in 19 people worldwide. The traditional method of tracking glucose levels by pricking the finger for blood sample is uncomfortable and painful, but according to Google, scientists have investigated various body fluids, like tears, in the hope of finding an easy solution. Taking advantage of this investigation, Google is testing a prototype that is built to measure glucose levels in tears using tiny wireless chip and miniaturized glucose sensor that are embedded between two layers of soft contact lens material.

This has the potential to serve as an early warning and Google is exploring integrating tiny LED lights that would light up to indicate that glucose levels have crossed above or below certain thresholds.

We checked out the electronic circuitry of a traditional glucose measuring machine and you can tell from the diagram below the kind of research Google has put in to make a miniaturized version of this glucose tracker.

Google is in discussions with the FDA, though it says there is a lot more research required before the product can be put for commercial use.

In the light of International Diabetes Federation’s statement that the world is “losing the battle” against diabetes, it becomes imperative to find ways of managing the disease better.

A lot of research on the same lines is already underway. A recent scientific paper published in June, 2013, titled ‘Miniature Biofuel Cell as a Potential Power Source for Glucose-Sensing Contact Lenses’, indicates the technology is not new. A popular tech blog also reported that Microsoft has been working on a similar technology for some time now.

Manoja, a medical student at KIMS, Hyderabad, agrees that it is an amazing product idea but adds that glucose in tears varies depending on the condition of the eye (cataract for example).

There are many aspects of this innovation which will need to be addressed. As an ophthalmologist indicated that wearing a contact lens for more than 10 hours can cause harm. And what about someone who already wears a power lens? Runjhun Jain, another MBBS student expressed concern that the eye is a delicate organ and the product should maintain high safety standards.

But all said and done, it is a revolutionary concept and another example of an amazing wearable technology device. Turns out the year is starting on a good note for technology.