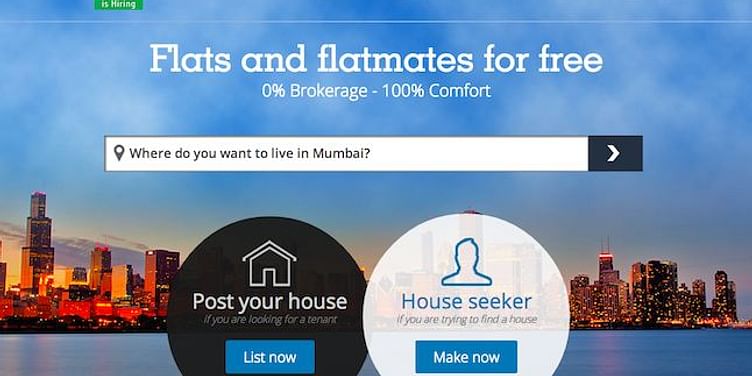 Launched in July last year, the startup primarily connects accommodation seekers with providers. If you have a room and want a roommate to share your expenses, then you can enlist your room on the website along with your requirements, likes and dislikes.

YS: How has the traction been so far in terms of users and owners listing?

PS: In five months since its inception, we have received 500+ house listings, 1100+ room seeker profiles created, 150+ people who have found rooms and roommates and have saved a cumulative brokerage of Rs. 12 lakhs.

We have also partnered with Flats and Flatmates Mumbai Facebook group which has helped us increase our social media presence immensely.

YS: Give us some details about securing the recent funding?

PS: We had raised some initial capital from Chetan Bohra and Navin Ranka of RB Partners. At that time we were one of the 10 companies incubated in India Quotient bootcamp. The seed round has been jointly raised from India Quotient and MV Krishnan, VP Deutsche Bank. We would not like to disclose the amount.

YS: According to you what's the market size of accommodation listing in India? Don't you think the market has become overcrowded?

PS: Our target customers lie in the age group of 18-28, who are mostly students and young professionals. Based on the number of students graduating every year and moving to metro cities, the market size is huge and we estimate 35 million potential customers in metro cities. Also an important point to note here is that property rates are skyrocketing due to which people are postponing their property buying decisions. This has created a lot of activity in the rental space.

The biggest motivation for us to start Grabhouse was that despite so many real estate websites, the problem remains unsolved. Big, established players work with brokers catering to a different sector with a different demand. But Grabhouse is solving the problems of the youth moving cities frequently, bachelors who are looking to share rent and people who do not have the means or will to pay brokerage. If it had been really crowded then we wouldn't have been the first 0% brokerage and compatible roommate search website. In fact, we are pretty excited to be working in this industry.

YS: How is Grabhouse different from other accommodation listing websites?

PS: The biggest differentiation is we are brokerage free. The problem with other websites is that since they are not broker averse, brokers publicize multiple listings, both fake and accurate, to lure customers. There is no transparency and users are not sure of the outcome. There is hardly any website that caters to people who want to save brokerage.

The advancement in technology has made implementation of a lot of ideas which were not possible a few years back. This is the right time to combine technology and ideas to solve real world problems. Our exciting features launched with the new interface leverage the power of social media to help people find flats and flatmates through their personal network without any middleman. This saves people a lot of trouble and money.

YS: Give some sense about Grabhouse’s strategies on the mobile front?

PS: We built a mobile-first responsive website for the simple reason that it ensures convenience and quick interaction between interested people.

Technology is at the core of Grabhouse. We have first-of-its-kind Android mobile app that lets people post their houses on Grabhouse directly without having to visit the website. This mobile app uses the phone camera to take pictures of the house and uploads them on the website. Users can fill in details just by tapping a few buttons. We also plan to launch a client side mobile app for people to list and find houses and roommates on the go.

YS: Take us through Grabhouse's future plans and what your market looks like in 2014?

PS: People have become extremely active on social media and more and more people are becoming tech equipped everywhere. This tendency has huge potential for a business like ours where the need is urgent and shelf life of properties is less. We plan to build features that use social media and technology to make people less dependent on brokers. The response from users in the past five months has been overwhelming.

We have plans to expand our operations in Pune soon. Also there are some innovative products in the pipeline which will connect corporates and college students to help them when they are shifting.