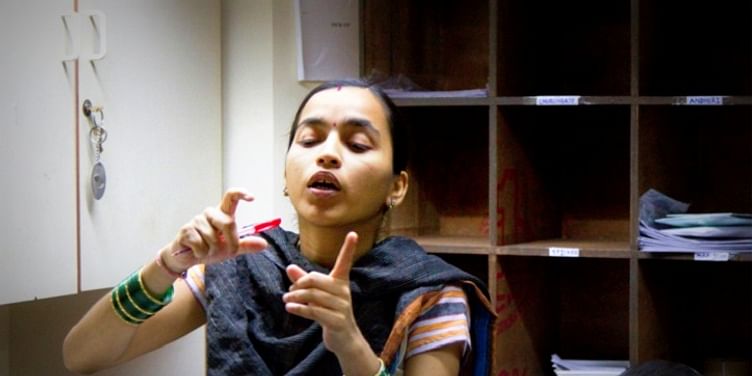 People of action are often reticent about speaking to the media about their achievements for fear of their words being manipulated. Such was the case with Dhruv Lakra of Mirakle Couriers with whom I've been interacting for more than six months to get him talking about the challenges he has faced while building a company which employs deaf and mute people to deliver couriers. He has spoken about the venture at multiple forums but he has rarely opened up to talk about the community he deals with. "Do you really want to make this dramatic? he asked still hesitant talking about this aspect of his venture. My answer to this is, it is a story worth telling.A mind for social impact

Dhruv has an impressive track record. He graduated from HR College, Mumbai, and went on to join DSP Merrill Lynch as an investment banker. He soon realized that his calling lay in the social sector. He quit that job after two years to join Dasra, an organization that works with various social impact efforts. "My experience at Dasra was truly revelatory. I worked at various places in India tackling issues like child trafficking to helping social ventures raise capital. A few of them have had a really deep impact and motivated me to work for the social sector," says Dhruv.

Post the Dasra stint, he went to UK on a scholarship for an MBA degree in social entrepreneurship from Said Business School, Oxford University, London. "I chose a one-year course so that I could quickly come back and startup on my own here. The intention behind the Oxford stint was to get some exposure and connections in the space," says Dhruv. One of his projects while in college was also in India and this is where the idea behind Mirakle struck him.

While travelling in a bus, Dhruv found a deaf boy sitting a few seats away from him and noticed the difficulty the boy was having communicating with the conductor. The bigger impediment for people with such a disability is their impairment is not visible. After that bus trip, Dhruv came home and signed a document to receive a courier. The transaction lasted 30 seconds and there was no real communication involved. Joining these two pieces of experience together, Dhruv thought of starting a courier service which employs deaf and mute people.

Dealings with the community

Dhruv was called a fool when he pitched the idea to a few people but he was adamant about trying it out. After some research, he figured out that there are groups for deaf and mute people in most big cities like Mumbai. He went to the one in Mulund to talk about his idea but the response was not good. However, he did manage to get one of the boys onboard. The boy convinced two more and Dhruv had three delivery boys for whom he needed to get consignments to deliver. He was fortunate enough to get a deal for trying the idea out and this was the beginning of a very valuable experience.

One of the primary reason why Dhruv thought that the idea is workable was because studies have shown that deaf people are good with repetitive operations driven activities and logistics is mainly that. But there were a disproportional number of flip sides to this- the levels of education in the deaf community in India (a 10th pass student couldn't add two digit numbers), the difference of sign languages in different regions because if the regional context (the way in which a Mumbaikar would explain something visually is different from the way in which a Punjabi would), the huge societal barriers to deaf people working, and many more.

In the early days of Mirakle, among the first three employees was a very bright young boy of 25. He was picking up the job quickly but suddenly, he stopped coming to work. Couple of months later he walked into the Mirakle office and it was revealed that such was his poverty that he could not even afford a bus ticket to come to work. However, one day he spotted a man in an orange Mirakle t-shirt and gathered himself to come back to work again. He is now a rising star at Mirakle.

Talking about another incident from the early days, Dhruv tells the story of another delivery boy. This boy was in training and the security guard of a society couldn't comprehend that he was deaf and mute and wouldn't allow him in. Dhruv was watching in the background and he didn't intervene till the security guard was on the verge of hitting and driving the delivery boy away. The security guard’s answer to Dhruv was, "If he is deaf, he shouldn't be working."

According to Dhruv, these are the social problems one has to face to get these boys working. In another case, a boy was not allowed to come to work after a year of hard work because all the work in the sun was tanning his skin and that meant that he wouldn't find a girl to marry!

These are the challenges that Dhruv has dealt with in his journey of over five years, despite that Mirakle Couriers today has grown to a team of over 50 employees with only three people who aren't deaf.

Staying with the times and growing the business

Creating social impact is very satisfying but when you're a commercial venture, you're benchmarked against the top notch companies as well. "Social impact, unfortunately doesn't really count while valuations of a company," says Dhruv. Mirakle had streamlined operations to an extent (mobile phones helped a lot), but their numbers weren't rising. "We noticed that despite having some of the biggest names as our clients, we weren't getting many deliveries because Mirakle was looked upon as the last option for shipping. The most unimportant documents were to sent via us," says Dhruv. Getting this trust factor in took a lot of effort. Constant feedback, rigorous training and implementing a strong technology base were crucial to get this bias away.

Along the journey, Mirakle also managed to get the gender bias plaguing the community out of the picture. Deaf and mute girls had an even taller barrier for entry into the workspace. However, the need for work like entering data online for all the deliveries got them a few slots at Mirakle.

Raising capital has been a tough ride but the numerous awards and the Echoing Green fellowship of $15,000 every six months has kept the venture above water. "I've had a few horrible experiences with venture capitalists in India. In one conversation, deaf and mute people were being referred to as dead people!" says Dhruv about the appalling misconceptions people have regarding the differently abled and the difficulty of raising money for such a venture.

Concentrating on the business side, Mirakle is now making a conscious effort to take more value based deliveries instead of playing the volume game and are doing around 600 deliveries a month. The support from Dhruv's family and his long time girlfriend (now wife) has been tremendous in keeping his spirits up. "It has been a really tough ride but when you see the change that has come about in the lives of these people, it is really heartening," says Dhruv. Mirakle is now also tinkering with the model a bit to start working with people having other disabilities. The journey for Dhruv and Mirakle has been inspiring and surely something to be held in the high regard.