Children rule at Timbuktoo, a startup for young authors 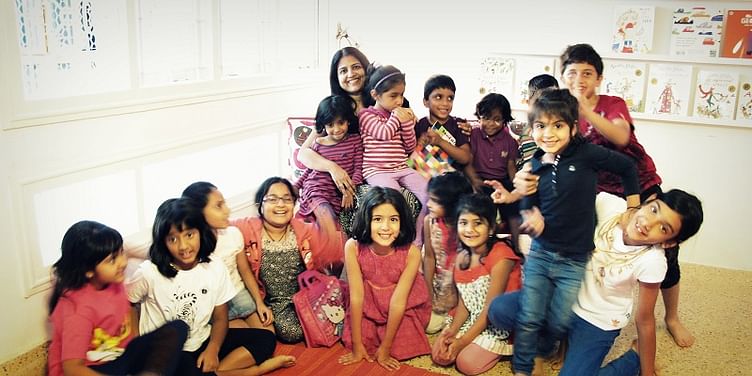 Timbuktoo Young Authors Publishing is a 2013-born publishing house operating on a ‘by kids, for kids’ platform. Timbuktoo publishes stories or any creative expression, created by children only.

Brainchild of creative professional Aparna Raman, the trigger to start Timbuktoo, like most entrepreneurs, came to her from her own immediate surroundings.

Aparna says, "I thought of starting this initiative while raising my son Rohan who, I observed, was always keen on putting ideas down on paper and other materials, creating diagrams, comic strips, scrap books and what-have-you. This led me to realize that children could be terrific content generators themselves and needed their own community of children to share their work with."

While a lot of children’s books are coming out in the market, what differentiates Timbuktoo is that it does not have any adult writing a book for children. Children write books for other children."My point is to create a whole new market for children authors, creating for their contemporaries – other children", remarks Aparna. And one cannot miss the underlying effect of this venture -- a child author is now connecting with children across the world. A community of creative children is being creatively created.

"With Timbuktoo World Library, a child of eight in Bangalore can connect with an eight-year-old in Singapore or America; view their work, share his own work and get an impression of how his contemporaries relate to stories. This is what makes me proud of my initiative. It’s much larger than publishing; it’s about creating and connecting an international reading and writing community", elaborates Aparna.

While international audience of children remains her focus, Aparna is also keenly tapping indigenous stories from the Indian hinterland and those of rural children who may not have the luxury of stories in their sustenance-driven lives.

According to Aparna, "the name Timbuktoo represents a land that’s remote, mysterious and exotic; a land from where there is delayed return to normalcy. (“Where had you gone – to Timbuktu?” is a conversation that generations of children have had.) In that sense Timbuktoo is a metaphor for the Imagination. You can go as far as you want, with it. Timbuktoo Publishing was born to represent this unhindered, free, individual aspect of imagining and self expression."

The challenge with creative ventures sometimes comes in the form of articulating clear revenue streams. Aparna has managed to sort this out for her venture and has outlined her revenue sources. "Timbuktoo has many exciting verticals all of which will be independent revenue generators in due course. At present, my creative writing weekend workshops, theme-based workshops and the recently launched Shakespeare Study Circle for teens are generating top most revenue. My first book from Timbuktoo is out this month, and I have two other books launching in early 2014. Plus, my monster mascots on the logo will be converted to merchandise, toys, games and even gaming. Expansion is going to be 360 degrees and multi sensorial/experiential. The first year has seen a lot of self funding from my end and I will be aggressively pursuing funding/sponsorship in the new year."

Wearing multiple hats of an entrepreneur, mother, and creative professional is not easy, but my meetings with Aparna clearly show the spark that radiates from her. You cannot miss it.

How does she manage to juggle multiple roles? Is there something other mothers and women entrepreneurs can take from her journey?

Aparna says, "I have almost 15 years of experience in advertising and design where I worked in creative brand building; skills, that are useful while creating a brand of one’s own. Timbuktoo is an imaginative space that taps my core USP as a creative professional. Becoming an entrepreneur gives me the thrill of giving birth to an idea that I get to own, keep, nurture and raise the way I wish, which is something an employee can only dream of. It’s exciting because there’s power, responsibility and the satisfaction of making a difference to young minds who can go far, with opportunity and direction."

As a woman, Aparna has her intrinsic strength to rely on."Being a woman entrepreneur in this space is a homecoming of sorts. A woman’s insight, intuition, and natural propensity for nurture, care and for creating memorable experiences for her family and community have been traditional strengths. Women always want to go that extra mile for children, to bring that special something to the table, to make a difference. So, I have my gender to thank,” she beams.

So, what's the new year going to be like for Timbuktoo?

"The Timbuktoo World Library will see a lot more activity as I reach out to readers and writers across the globe. The Timbuktoo Indigenous program for sourcing stories from the interiors of India is an ambitious project for which I will be applying for a grant. Having said that, I could get an all-new idea just after this interview is over – so that’s the idea-a-minute creative process I am thriving on at this point," says Aparna.

The first book from Timbuktoo titled “My Book of Me – who am I going to be today?” authored by a group of seven children between six and eight years- is already out. The book is what Aparna call, a "‘role play collective’ written in verse" and the launch has been a big boost for Timbuktoo. Two books authored by Aparna titled, “The Moon who wanted to be the Sun” and “I and Mighty” will be launching early this year. These books are for parents and teachers as much as they are for children. Naturally, with her creative background, the book promises to be high on design and illustrations.

Timbuktoo is a promising venture, especially in our world where we give more importance to results than the process.