[Techie Tuesdays] Vivek N, the coder who got his wisdom in the Himalayas 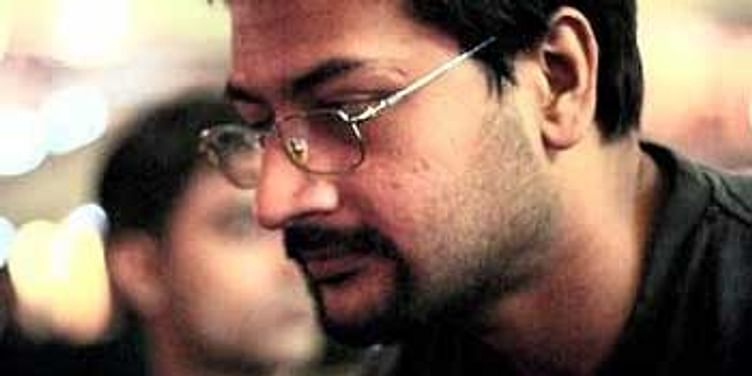 To describe Vivek N in one sentence is nearly impossible. Besides being proficient in technology, he also works with wood, is a martial arts enthusiast, and a biker. After a road accident forced him to remain indoors, he started freelancing, and the joy this freedom provided ensured that he continued to remain his own boss.

Vivek’s father worked as a senior engineer in Vishweshwaraya Technological Museum in Bangalore. As a result there were regular weekend trips to the museum which inculcated his interest in science and technology. There were lot of science and computer workshops at the museum which Vivek would attend. In 1987, his elder brother enrolled for a computer course and Vivek tagged along with him hoping to build his own computer game.

His mother holds a dual Masters in Sanskrit and Philosophy. Reading was encouraged in the family and his sister was instrumental in forming his early reading habit. While reading aloud, she would leave a story unfinished forcing him to complete the story himself.

Life in the Himalayas

In the summer of 1991, Vivek’s family, excluding his father, had to move to Harkidun, Supin Valley in the Himalayas due to some personal reasons. They lived in the remote area for 11 years. However, after a few years, Vivek and his family would travel to Dehradun, where Vivek could access internet from cyber cafes.

Talking about his days in the hills, Vivek says, “We bought a 486 computer, which ran on solar panels. We would get water from the stream near our house and pour on the panels to cool them down and increase their efficiency. We could use the computer only for four hours every day since we had to save electricity for the night also.”

Vivek and his siblings also learned carpentry, stone masonry and built their own house by themselves. Their house was practically a farm with a dog and a cow. They also did a bit of farming, growing their own vegetables. “You can't complain. You see people doing these things around you and it inspires you and gives you the strength to carry on,” says Vivek. He was also inspired by the works of Charles Dickens and Swami Vivekananda.

"As you don't have many sources of knowledge, you visualize the system in your head and learn alternatives by trial and error," adds Vivek.

Getting back to code

One day, while chatting on Yahoo groups in a programming chatroom, Vivek met the founder of Tachyon Technologies. He approached Vivek to work for Tachyon. Despite Vivek telling him that he had no formal education, he hired Vivek. Vivek moved to Chennai in 2002, and worked on some interesting projects in Tachyon, including a web-based sharing and a multi-party chat tool (they were not as common in 2002). Vivek also coded the initial version of Rediff Bol (a Rediffmail messenger which was one of the first to offer SMS service).

Vivek also wrote a couple of libraries for the famous Installshield tool and was part of the team which developed cspace, an anonymous peer to peer chat tool.

In January 2005, Vivek had an accident and broke his kneecap while riding his bike, Bullet lightning 535. Due to high hospitalization costs he was neck deep in debt. After his recovery, Vivek moved to Dehradun to live with his brother and started freelancing on rent a coder. After an initial two to three months of struggle, he started getting good projects and things settled down.

“Honesty is the best policy while dealing with a client; you can say you were bored or sleeping but never lie. Gaining trust online is a difficult thing, tell them the truth. This is the only way trust gets established,” says Vivek. Once his friend, who was an MVP (Most Valued Professional by Microsoft), gave him the entire MSDN library as a token of appreciation after Vivek helped him with a code from a client, but only after taking the client’s permission.

At present, Vivek is working on a prototype to improve the efficiency of the electronic fuel injection system engine.

Talking about the future, Vivek says, he wants to build a makerspace for people to work on, which focuses not only on techskills but on DIY, crafts and life skills.

According to Vivek, the following are the top three lessons he would like to share with the readers.

2) Always question conventional wisdom, regardless of the source.

3) Don't fall for materialistic things, they can always be replaced.