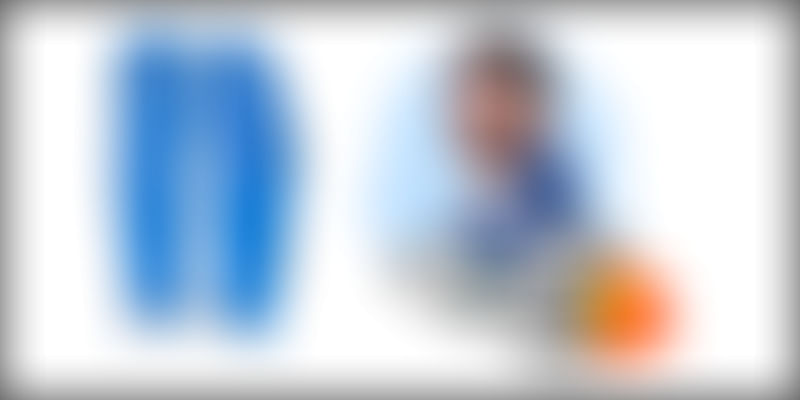 Did you know that when a batsman runs with leg-guards (which incidentally weigh almost three kgs) it slows down his speed? Essentially, when the batsman runs with the leg-guards as compared to without them, for every run the difference is of three feet. Bangalore-based startup MoonWalkr has come up with a solution that not only provides protection to a batsman but also allows him to run faster. To be precise, the new product has brought down the difference to 1.5 feet.

Sanath Reddy is the brains behind this innovative leg-guard marketed under his startup called MoonWalkr. Sanath has played state-level cricket in Bangalore as an opening batsman, and is also an avid wildlife photographer. In fact, he came up with the idea of MoonWalkr while he was on one of his photography sessions. MoonWalkr’s revolutionary batting pads not only protect the batsmen but more importantly they make it easy for the batsmen to steal singles and improve their stride on the pitch. The pads are made of composite material that makes them 50% lighter and 18% more efficient than the traditional gear in absorbing shocks.

MoonWalkr is marketing these leg-guards as a mobility product rather than just a protective gear. Interestingly, innovations in cricket are seldom seen from India, and the fact that Sanath and his team have been successful in designing and developing this innovative cricket gear is no mean achievement.

Sanath is joined by his friends Ajay YJ, another former cricketer, and Krishna Vasist, in this endeavor. Ajay studied engineering and then did an MBA. He worked in TATA Consultancy Services as an analyst but he quit his job and joined Sanath when MoonWalkr was in an idea stage. Later, Krishna, who had studied sport management in the US, also joined them following a visit to their manufacturing facility; he saw what this sport equipment could do for the future of the industry.

An industry ripe for disruption

Did you know that of the 21 brands of cricket gear, 18 are manufactured in India? And there is a sort of manufacturers’ monopoly based in Jalandhar and Meerut. There is no evolved ‘product design’ consciousness and the world cricket gear community has been held hostage by the monopoly in India.

Sanath and his co-founders built their first functional prototype in 2011. To their surprise they were invited by Sachin Tendulkar to his house in Mumbai for a demo followed by another invitation from Rahul Dravid. The team got to meet all the top cricketers in the world not because of who they are but because of the product they had developed and the players believed in its potential. That is proof-of-concept for any startup -- to be validated by the giants in the ecosystem.

For the prototype they looked outside of conventional materials available and that thought process led them to work with Fraunhofer Institute in Germany because they have specialized in new-age material technology. They did a 10-month evaluation exercise with the institute.

To illustrate this point, let’s take the example of cricketer Cheteshwar Pujara. A promising cricketer, Pujara received a setback after he had to undergo knee surgery due to injury. Though he bounced back, his speed was affected. What if he had pads made with the new-age composite material which could increase his mobility? It could transform not only Pujara’s fortunes but also that of the Indian batsmen. It may sound like a tall claim but with the new technology it may well be possible. The newer context of the game is all about speed (think T20) hence mobility becomes significant.

One of the things MoonWalkr is trying to do is change the material DNA of the cricket protection gear landscape. This doesn’t mean just a change of material; it entails change of manufacturers, processing techniques and over all support system. MoonWalkr aims to change the whole concept of cricket gears like gloves, thigh-guards and helmets, and not just leg-guards. “All the leg-guards that are available in the market will give you decent protection. But what we were trying to address was along with protection can we provide mobility too,” says Ajay.

They tested MoonWalkr’s leg-guards with the National Instruments, an American company that has specialized in data acquisition for high impact testing, and found their product has 20 % better protection. According to the MoonWalkr team, “One of the cricketers who wore our leg-guard said he felt naked! ‘Will this protect me’? he asked us.  This is a sort of victory for a product design guy; to make a batsman feel as if he is not wearing anything. The other way of looking at it is we need to address the emotion of fear that the player felt. Well, for that he needs to go out on the field and test it in his next session.”

Disruptive startups like MoonWalkr have always faced the classic dilemma between licensing their product to existing players with mature distribution channel verses striking it on their own and taking on the biggies. When we discussed this with the team they showed their willingness to explore both the options. With flat OEM deal they want to enable the market sooner without killing the story of who did this? Why did they do this? While building MoonWalkr as a brand and still fit into the market reality of licensing. The company is strategizing on creating streamlined communication and marketing across cricketing community to herald a new cricket gear, at the same time, making sure the product is accessible in retail stores in India, Australia, England and South Africa. In India, they are looking at spreading to 12 cities. At the end of this moth they will be present in three e-commerce platforms.

Their consumer market approach is like a double-edged sword, top-down and bottom-up approach. At the bottom of the layer they would be meeting budding cricketers, coaching camps so on and so forth. For the top-down approach they are in constant touch with some cricketers who will sport MoonWalkr pads.

Sanath Reddy says: “There is a massive deficit from creative imagination to actualization. We are completely hostage to manufacturing ecosystems to bring together the two parts. You can dream the world, but if you are not in an ecosystem that can bring idea and thought to a physical product then it’s such a bummer.” Because the ecosystem wasn’t mature enough to cater to disruptive ideas, the team admits they were forced at stages to make compromises even though they had these beautiful ideas.

For the team the biggest challenge felt like they were building a F1 car. That was classic MoonWalkr challenge. How do you build super functional car and make it available at Nano price? Their day-to-day challenge is to build without compromising with material technology and pricing the product right at Rs. 2999. There are imported brand that are available in India at Rs. 8000 and above. Whereas MoonWalkr is lighter than the pads that cost Rs. 8000, slimmer than those that cost Rs. 10,000 at a hyper competitive price which is Rs 2999. The team clearly asked us not to compare them to the Rs. 1000 gears. Instead, they boldly urged us to compare them with top leaders in the market.

Funding the revolution of sports equipment

MoonWalkr has been bootstrapped by Sanath Reddy, and recently received a seed funding of Rs 1.5 crores from ADD Ventures. Some of the people involved in ADD Ventures are people who bring in not just cash but also business intelligence because of the companies they’ve run. They also bring in tremendous network capital in the ecosystem. For the MoonWalkr team, network capital is something they are constantly looking for. They say somebody who can bring in network capital in our domain is priceless.

They advice budding entrepreneurs to factor budget and time four times their budget. “Be wise about your aspiration of what you want to do and when you want to hold back to unlock aspirations. You have to have the mental stability of a marathon runner. Have perseverance when you think things are not working out. Think of it in terms of changing an industry for better. Stick to your core ideas. Whatever minor adjustments are expected by the market; you have to make those adjustments to fit into the market reality.”

What do you think of this product? We are keen to hear your views.