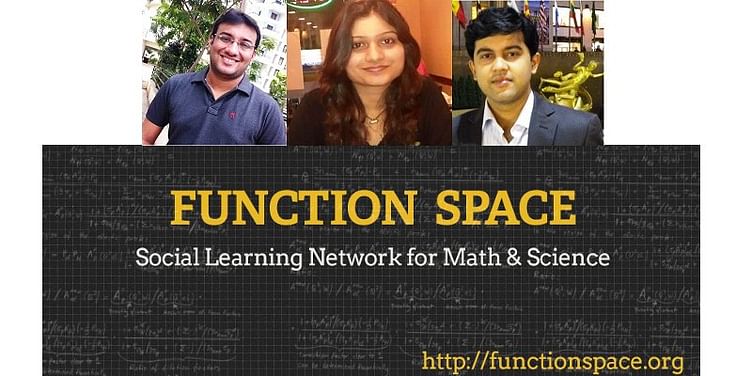 Function Space is a Pune based collaboration and learning network for students, researchers and enthusiasts in Mathematics, Physics, and other sciences. The company has announced today that it has closed funding from Nexus Venture Partners. The funding will help the company expand content, develop engaging tools, and aggressively expand its contributor and user base. Sandeep Singhal, Co-founder & MD, Nexus Venture Partners will be joining the Board at Function Space.

Function Space was founded in 2013 by Adit Gupta, Sakshi Majmudar and Sumit Maniyar with the idea of creating a complete ecosystem for learning higher science online. The team comes with a background in technology and design and a cumulative experience of about ten years. At the core, Function Space is a social learning network for science with complete ecosystem -articles, video lectures, problem solving, discussions, and networking- for participants from academia to corporate research. "We intend to bridge the gap between academic curriculum and skill based requirements of workplace," says Sumit. The product has tools that has solved some of the critical problems via LaTeX integrated platform with markdown formatting, diagramming tool, responsive interface, and embedded videos.

“Function Space serves a crying need to make Mathematics and Sciences fun and engaging. We are thrilled to work with the founding team that is committed to exposing the beauty and usefulness of STEM (Science, Technology and Mathematics) to experts and non-experts alike”, said Naren Gupta, Co-founder & Managing Director, Nexus Venture Partners. “We hope to see a platform, where advanced researchers can discuss advanced topics and enthusiasts can be exposed to a collection of traditional as well as emerging knowledge in STEM”. Current users include students from top universities, high school, engineering undergraduates and researchers in advanced commercial labs. The outreach has been online and organic but alongside they've also conducted offline events which got them the initial eyeballs. Talking about the funding, Sumit says,"We’d got couple of investors who were interested in our venture. We were also selected for next round by 10,000 start ups and web-summit (amongst top 10 startups in India at WS). Eventually, we raised seed investment from a NVP."

Function Space is a team of about 15 with five full time employees and will use the financing to scale its online platform and expand its global outreach. The funding will also be used to build a stronger foundation of collaboration tools appropriate for the Science communities and to attract additional experts to the site. Function Space currently boasts of a strong community consisting of users from over 190 countries, including students, professors and researchers from MIT, Stanford, University of California, Berkeley and Los Angeles campuses, Indian Institute of Technology campuses, Indian Institute of Science, etc. The site has a monthly traffic of around one lakh unique visitors. The focus currently is solely on building a platform that can be used by all learners and collaborators. The revenue model will evolve once the site reaches critical mass although the business side is not something that the team has neglected while thinking out the plan.