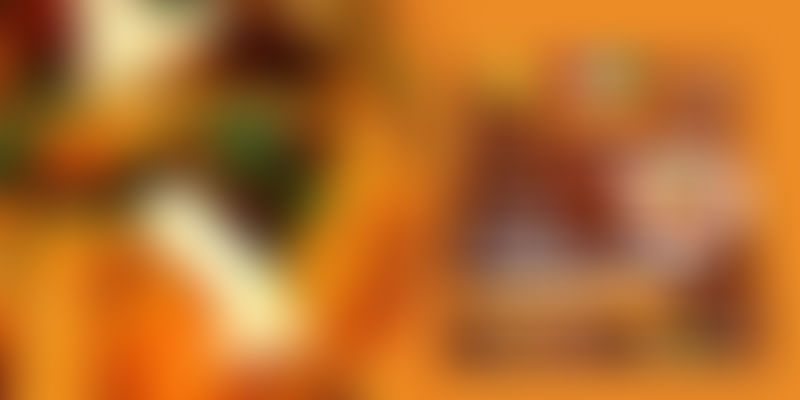 Considering the number of food ventures started by IITians (Box8 and Frsh being the latest), it may be no coincidence that we have yet another food venture from an IITian.

A common problem faced by the large population of students and working singles who stay away from their families to study and work in a different city is access to good quality food. And by Nipun Katyal, Co-founder of Fizzy Foodlabs’ own admission, eating mess food for a long time had bored them no end during the IIT days. So from dreaming of starting a shack in Goa to now actually setting up Fizzy Foodlabs, their fixation with food eventually led them on the startup route.

Varun Jhawar co-founded Fizzy Foodlabs along with Nipun in August 2012 and Manish Tirthani joined them a year later. Fizzy Foodlabs is a young startup that has embarked on an ambitious journey to make a mark, and get a share of the estimated large and growing Rs 2,900 crore ready-to-cook market of India. The dominant players in the space today are Nestle, HUL, ITC and Marico among others.

From idea to reality

After graduating from IIT Bombay, Varun had worked with P&G, while Nipun joined consulting firm Booz & Co. Both co-founders had a close experience of the FMCG business during their employment years and Nipun says that experience is coming handy in their own entrepreneurial outing. “While working on our assignments we realized there is a big gap in the market and if we could get the product right, then FMCG offered a lot of opportunities to grow and scale,” says Nipun about their choice of business.

What Fizzy Foodlabs have set out to do is put world cuisine that we eat at fine dining restaurants in a packet. So think pasta, burrito, salsa, etc in a pack. But no, this is not the plain pasta packs that you get at super markets. Because Chef’s Basket – viz Fizzy Foodlabs world cuisine brand – is offering you all the ingredients you would need to prepare, say an Arrabbiata, in a single pack. You will find penne, Arrabbiata pasta sauce, extra virgin olive oil, Italian herbs and sea salt in a 506 gms pack of Arrabbiata, along with the recipe to cook the product at home.

Both Varun and Nipun quit their jobs in August 2012, and the first one year went in refining the idea, identifying partners they can work with, sourcing products and more. Today, Fizzy Foodlabs has a panel of 12 chefs who are responsible for product development. Once a product has been developed, it is vetted by the chefs’ panel for its taste and flavour. There is also a group of people who have signed up with Fizzy Foodlabs to be on their tasting panel. The panel gets to taste any new product launch and if there are any suggestions or changes then the product undergoes iteration before its final launch into the market. “We had a hunch that world cuisine in India will grow, and will have a parallel with food service in India. So as and when the Mexican and Italian restaurants in the city grow, people will want to eventually cook pasta and Mexican food at home also,” reasons Nipun.

Priced between Rs 250-400, Chef’s Basket products are quite pricey. Nipun, however, clarifies that Chef’s Basket is not super premium, but would fall in the mass premium section. “Pasta consumption is happening in two ways: people who are purchasing the Sunfeast type of pasta, and then those who opt for Italian pasta. The recipe kits will be the gateway for new consumers to enter the world foods category, and that’s the whole idea we started out with,” he says.

Nipun is unsure of competition or market potential because he says there were no recipe kits in the market when they entered, so direct competition is absent. However, according to some back-of-the-envelope calculation, Hypercity mall in Malad in suburban Mumbai, sells about Rs 20 lakh worth of pasta each month, and Fizzy Foodlabs wants to be among the Top 3 players in that space, says Nipun ambitiously.

Fizzy Foodlabs has tied up with Food Bazar to do a pilot in their Top 20 outlets across the country. The pilot is running at their outlets in Delhi, Mumbai, Pune, Bangalore, Ahmedabad, Surat and Kolkatta. While the initial push is in metros, Nipun says they are equally bullish of the opportunity that exists in Tier II cities, because for consumers who want to cook pasta in the smaller towns getting all the required ingredients would be more difficult compared to a metro.

“Let’s say someone wants to cook a Barrito or pasta, getting a basil-infused extra virgin olive oil is a big challenge. Getting all the ingredients together is a value preposition that makes more sense to a Tier 2 city consumer as well. The only thing is we need to look at the price point,” says Nipun.

Fizzy Foodlabs is mostly using the activation route for publicizing its products. They are participating in many food events to help customers familiarize with Chef’s Basket. In-store branding and shelf display is done across outlets where they supply. Their Facebook page is being used as an educational medium to spread information about world cuisine. They are also engaging with food bloggers to try their products and then blog about it.

Another important part of the publicity is the product packaging itself which is done aesthetically and is sure to catch customer attention on the retail shelf. The startup used the help of a Romanian designer to help create the package design, shares Nipun.

Today a bulk of sales for Chef’s Basket is coming through the modern trade route – as much as 75%. However, they are also selling through e-commerce stores like Local Banya and Big Basket. “Offline is driving sales much more, online sales is mostly through push driven channel. We keep having some offer or the other; we were earlier offering free garlic bread with the pasta kit, now we are giving away free Coke – the more offers you can do online, you will slowly be able to build the channel,” explains Nipun.

Besides the co-founders, Fizzy Foodlabs has 12 employees today – most looking after sales and operations. Varun and Nipun started with their personal investment of Rs 12 lakhs each, which they had saved from their previous jobs. Family and friends also chipped in some seed funding to help them get off the ground. Nipun also talks about a central government scheme to push entrepreneurship called CGT SME, which gives upto Rs 1 crore of collateral free debt. Fizzy Foodlabs applied for this scheme and was sanctioned Rs 50 lakhs, of which they have used half the funds.

Nipun claims they are doing revenues of Rs 10 lakhs per month from only Mumbai city and are hoping to touch Rs 25 lakhs revenues a month when they launch their other four products as well as enter Delhi, Bangalore and Pune in the coming months.

They are also planning the launch of another brand – World Café – which will comprise different types of ready-to-eat snacks. “World Café for example will comprise of nachos and dips in a single tray packet or pita chips with humus – so basically chip and dip combos which you can peel open and eat,” says Nipun. Once they roll out the seven products in Chef’s Basket and launch World Café, Nipun says, they will seek external funding to help them grow and scale. They are already in talks with some VCs and PE firms for raising funding.