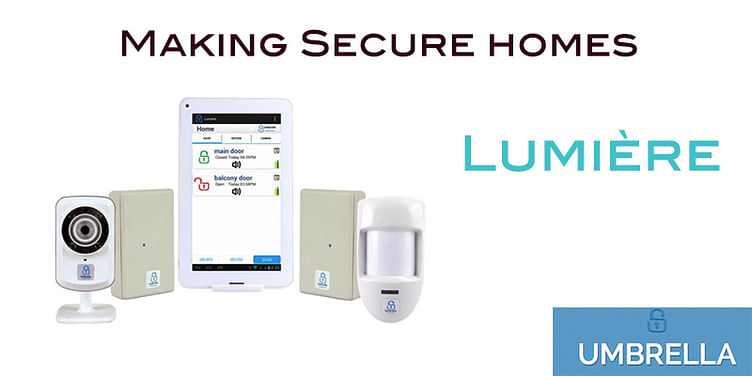 Gone are the days of the joint family system when grandmothers, aunts and other family members ensured there was at least someone at home, thus leaving no need for any home security devices.

Times are changing rapidly. Today’s nuclear families have no choice but to lock their homes when out on work. In most metros, households remain vacant during the daytime, thus increasing the chances of theft or mishap.

This has compelled people to install security devices in their homes and offices, and they are open to exploring the right kind of devices.

The team behind this product

Shashank spent most of his time researching security solutions, but found that the existing solutions were trivial and didn’t always satisfy the needs of the consumers.

After graduating from BITS-Pilani, Shashank Maheshwari worked at Ericsson Corporation in Bangalore for a few months. During this time, he experimented and built prototypes for his security device idea. Once he was comfortable with the prototypes, he took the bold step to quit his job and started his venture Umbrella Protection.

With rising crime and no particular technological advancement in this sector, he saw a gap in the needs of the consumer and existing solutions. For the initial few months, he worked alone and ran the whole startup from operations to prototyping. His BITS Pilani batch-mates, Tobin and Bharath, later joined him as co-founders. Tobin took over the initial marketing while Bharath took over the software design & development.

Their systems provide exact real-time information and live streams of houses/offices no matter where the user is. This is one feature that he believes is exclusive to them and fills a huge gap in this space.

Once the product was close to completion, the team expanded and hired sales representatives. The current team comprises of five people in the sales team, including MBAs from Delhi University. They have two production engineers in the team and are hiring more developers soon.

Their product, Lumière is a simple, intelligent, interactive and highly personalized cloud based security system. It employs the latest cutting edge technology without bringing in any of its inherent complexity. Lumière is essentially a plug and play system with an elegant and refined interface that can be effortlessly setup and operated by anyone.

Speaking more about his team, Shashank says, “We have a team that is quick to take action. We are deeply involved with our customers and take very extensive feedback. These feedbacks are immediately implemented into our products.” It’s very pleasing to see that a lot of the features in their current products are feedback suggestions from their customers.

The team believes in the motto to create solutions that directly affect the lives of people helping it make simpler, better and peaceful.

Overview of their product

The security systems industry is highly disorganized. The current players have been selling outdated technology with no major advancements. Current systems are complex to install and use. Simple overview of the market makes it evident that after installing the existing systems, customers are unable to understand and use them because of their complexity, making them useless.

Shashank, along with his team, spent six months on market research trying to understand the market, its potential and industry structure. This is one of the fastest growing industries in the country, currently at a rate of more than 35%. This is primarily because of the fast growth of infrastructure in the country. The end of 2015 projects the market capitalisation to be around INR 1900 crore.

Their current product is competing with Honeywell, GE, Godrej Security Solutions, Eureka Forbes, Alba Urmet, Bosch, Texicom, Vantage and other Chinese and Taiwanese players in the market. Price, reliability and distribution channels are the few factors that influence the product’s reach in the market.

The national market is expected to be around INR 1900 crore by the end of 2015. This team is currently focusing on Delhi NCR region. This area has considerably high crime rate making it the best potential market to capture for this team. According to their research, the maximum number of security system installations takes place in regions, including Delhi NCR, Haryana, Punjab, Part Uttaranchal and west UP.

There has been a 20% rise in burglary and house thefts in NCR region alone that is among the highest in the country. Thus it sounds logical to start in the area where they would be closest to their potential customers.

There are many local players in this home security market that emerge and fade out with time. Majority of them are Chinese or Taiwanese companies trying to promote their products. Shashank believes that true designing and manufacturing has not evolved in India. One of the major reasons of them falling out is not being able to understand the Indian consumer and adapt to their needs.

Indian market is definitely getting mature towards security systems. A few years back, there use to be no security system in households. But times are changing, these days every house in the metros has a video door phone. As the players are developing more advanced security systems at affordable costs, consumers are getting more aware of such systems and want to install them for their safety.

Currently, his team is pushing their products via retail sales and institutional sales channels.

Institutional Sales: Their current clients in institutional sales include UCO Bank, VeriFone Corporation, Alstrong Enterprises, Hypercom, and Maple Logistics etc. Apart from this, they have a good network of prominent architects and big builders who they work with. Possibly the best way to penetrate in the market is through B2B sales and this way helps startups gain access to huge markets and confirmed sales.

Challenges the team encountered in the journey

Running a hardware startup is like running multiple startups at a time. There are many things to be taken care of simultaneously.

For hardware startups, merely getting from a prototype to a product ready for market is itself challenging. The expenses in a hardware startup have to be managed very carefully else they escalate very quickly. One very big challenge in hardware products (especially consumer products) is to have the right costing. This should be taken into account at the very initial stage and at every step of product development.

“No matter how advanced your hardware product is, it's impossible to enter a price war for a new brand if they don't have a credible low cost solution,” says Shashank.

Building a hardware product that can compete with giants like GE is a challenging task in itself. Shashank and his team are really giving their competitors a tough fight with smart product and equally smart distribution channels. Their products are a perfect blend of software and hardware without being complex.

Making a simple system is always the most difficult task. Shashank says, “We have had many sleepless nights and intense arguments while designing the system to keep it as simple as possible. We decided that if our grandmothers can understand our system, then it’s truly simple!”

Apart from that, just developing the hardware product is not enough one has to really focus on their distribution strategy, after sales and multiple other parameters.

Developing a supply chain in India is always challenging as suppliers here are generally not very reliable. There are constant delays and issues which severely affect the product development and production. Thus this team had to build multiple suppliers for every component and manage between them.

He shares that keeping the costs low was one of his biggest challenges while building the product. During the journey, the team had to devise many unconventional ways to keep costs in control. They have spent minimum on the in-house machinery and outsourced production as much as possible.

Finding out low cost alternatives to every component is always a big challenge. For example, the team changed the processor of one of their product’s sensors four times reducing the cost of processor itself by almost 20 times!

He believes that feedbacks are must, “We take extensive feedback from our customers and try to implement them as much as possible. Currently, we are adding our components base by adding more sensors to our product portfolio. Soon we plan to move in automation space too.”

Why hardware is the new sexy?

Speaking about the satisfaction post installations, Shashank exclaims, “Many times our customers remove their Honeywell or GE systems to install our systems. Every time this happens, it is a very special moment for us. It implies we are on the right track, and gives us a sense of accomplishment.”

He agrees that students are slowly warming up to the idea of hardware startups. He considers the prospects of real time learning on physical goods as one of the top reasons for this shift.

“Delivering a hardware product is much more than delivering a piece of code,” he says. Working in labs on a hardware product makes one understand the complete chain of product delivery form its raw material to after-sales service. He firmly believes that working in such an environment imparts tremendous amount of learning that IT startups may not be able to provide.

Its yet another amazing hardware story that highlights the bold attitude of the founders.