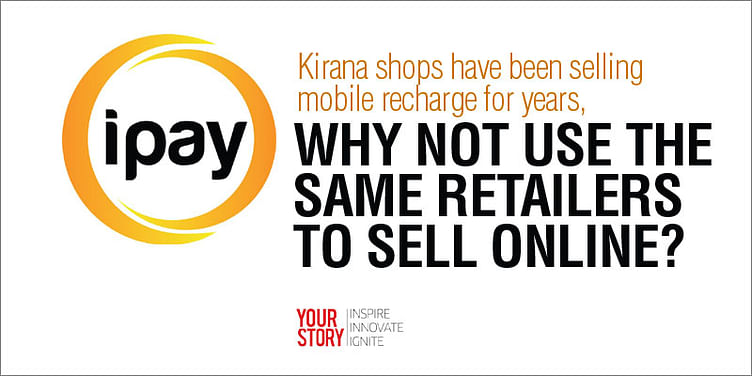 According to the Internet and Mobile Association of India (IAMAI), India will reach over 240 million internet users in June 2014; the country continues to add over four million new users every month.

Obviously, this growth aids consumers from metro cities to small towns to have access to millions of products at their finger tips.

Last year, India had only 20 million online shoppers, that number is estimated to double by 2016. Even that number (40 million) is a very small number compared to the other BRIC countries.

There are many players at different levels trying to narrow the gap between the online-to-offline commerce. IPay’s ‘Business-in-a-box’ is one of those recent attempts by a startup. The main premise being, “Kirana shops have been selling mobile recharge for years why not use the same retailers to sell online?”

Mr. Krishna Lakamsani of Mumbai Angels, serial entrepreneur and Harvard Alumni investor with investments in 17 companies, is the man who bootstrapped Hyderabad-based IPay Tech (India) Pvt Ltd with over a million USD.

Founder & CEO Krishan says, “Only 2% India buys online, we decided to develop a model using technology and trust points to serve the remaining 98%. This will open doors to a large market. After a well-researched pilot, we created this hybrid e-commerce platform that connects sellers (e-merchants) and consumers (aam aadmi) through our trusted network of retailers whom we call IPay Cash Points.”

In a usual marketplace model there are two sides, the sellers and consumers. But in IPay’s case, there is a three-sided marketplace.

One side enables sellers to sell on IPay platform; second enables retailers to sell those items which they would have not sold before; third side allows consumers to purchase them locally from trusted retailers.

By doing this the company is trying to create value for all three stake-holders. Krishna says, “Through our model, sellers can reach an untapped population, because these people are either not on the Internet or they don’t want to buy on the Internet.”

Using IPay’s platform, retailers can sell those items without stocking them and earn money from that. Retailer can increase their SKUs (stock keeping unit) without spending on inventory and space; and still serve all their trusted customers through our platform.

The consumer can buy services/products (digital products like talktime, bus tickets and physical inventory holders such as manufacturers, distributors and wholesalers) at his/her local retailer. Most importantly, he/she is dealing with a human, which is what Indian consumer needs.

Three times a week, Kiran of Gandhinagar visits a kirana store in the neighborhood run by 70-year-old Subba Rao, who is also an IPay Cash Point. They know each other well, including their addresses.

Kiran can now purchase a ticket to travel by sharing his number on the IPay software loaded tablet that Subba Rao keeps at his store. On entering his mobile number, Kiran receives a call from IPay call centre that completes the transaction. Kiran is requested to pay the transaction sum to Subba Rao, who hands over the ticket to Kiran that gets printed on the mini Bluetooth enabled thermal printer.

Similarly, any consumer may order for products/services from an IPay Cash Point and pay the retailer locally. This basically takes care of the consumer’s trust and hesitation to pay someone who he does not know.

Founder & CEO Krishna Lakamsani says, “We directly approached retailers and showcased our product (customized tablet), that we call ‘Business in a Box’. In a short span of 120 days, we have created a network of 500+ retailers who are using our solution every day at their store. On an average, each retailer share of wallet for IPay sales is approximately 20% to 25%. We created a framework and processes by managing 500 retailers locally and mastered the process. Now we are ready to replicate the same by appointing ICC (IPay corporate correspondents). These ICC are local small aspiring entrepreneurs, which include FMCG/Retail/Telecom Distributors who work with IPay to establish a network in the local area and earn based on business growth from that area.”

The company runs a pilot in Hyderabad where they tested with 500+ retailers. Each retailer transactions included mobile, DTH, data card topups, DTH new connections, bus tickets, flight tickets, movie tickets, bills and physical goods such as gifting items and so on. Through the network effect of 500+ retailers serving their local communities for 240 days, IPay reached 7.3% of Hyderabad’s population.

“Our technology can be scaled any moment to take 100,000 transactions per minute,” he adds.

IPay operations are unique and there is no one in India who offers the same suites. There are a few companies which have a few similar things like mobile recharges. Last September, Bigbazaar decided to sell Bigbazaar products on tablet through retailers. Qiwi is another company out of Russia which accepts transactions through self-serviced kiosks, which are placed outside retail stores.

Business in a Box solution costs Rs 8,888.00 and the retailer can use this for increasing his/her business and footfall to his store. They charge merchants percentage of the sale. This percentage is based on the service and its potential of sale in the market. It varies from 2.0% to 20% based on service/product.

“We did not have any regulatory impact; we created our model to keep away from such regulatory dependencies/impacts. But we have passed many hurdles to come this far. For examples, for banking integrations, for payment flow and cash collection, we have worked with national banks and private banks. We have worked with telecom operators to acquire internet service for our retailers that would work for only IPay as white label GPRS SIM. Last but not the least, to create Business in a Box solution for retailers we created our own hardware Tablet PC that comes cost effective and with good quality. Now we have mastered the processes,” remarks Krishna.

Krishna advices, “Unit economics are very important. Don’t think investors are there sitting ready to write a cheque for your business. Make sure what you are addressing is a reasonable gap that can be made into a business. When you are starting a business, a co-founding team is very important. Choose those people who are truly committed to the company and are fully convinced about your idea and execution plan.”