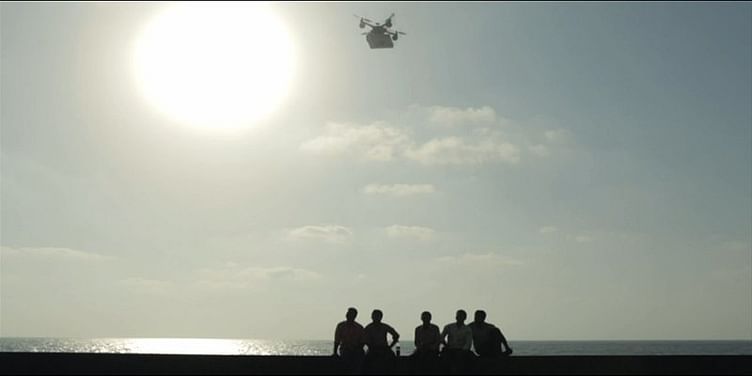 The Francesco Pizzeria in Mumbai is a quaint little restaurant that has existed for two years. But today, it has attracted a flurry of media attention. Why? It is the first pizzeria to have delivered a Pizza by a drone! And the best thing is that they've made a brilliant video about it. Call it a marketing gimmick, or a move by some really forward looking owners, but it has surely struck a chord.

Mikhel RajaniRajani who comes from a textile background and is the chief executive of the Pizzeria says, "We successfully carried out a test-delivery by sending a pizza to a customer located 1.5 km away from our outlet on May 11." Francesco has only one video on their YouTube channel and it has already crossed 75,000 views:

Francesco has been using the hashtag #DroneDeliversPizza and is already stirring quite a buzz. This is only a test-flight but its results confirm that it can be used routinely in a few years according to Mikhel. For the current delivery, a four-rotor drone took off with the order from its outlet in central Mumbai's Lower Parel area and delivered it to a high-rise building in adjacent Worli area. "What we have done now will be common place in the next four-five years," he said, adding every such customised drone costs around USD 2,000.

Some concerns as of now:

Amazon made drones popular when they talked about the experiments they're doing with deliveries (‘Amazon Prime Air’ drones meant for delivery) and before Amazon, there was demi copter. After this, Google ventured into the area by acquiring Titan Aerospace. The heat is on and the technological advancements leave us in awe. There have been strict regulations in the west but the coming few years will clear out things and decide the future on how drones can be used. Closer back home, there has been activity with drones as well. ideaForge is an upcoming startup from IIT-Bombay that has been experimenting with drones and they used it successfully during the Uttarakhand relief mission. Social Drones is another startup which is into using drones for the social good.

What are your thoughts on these developments?