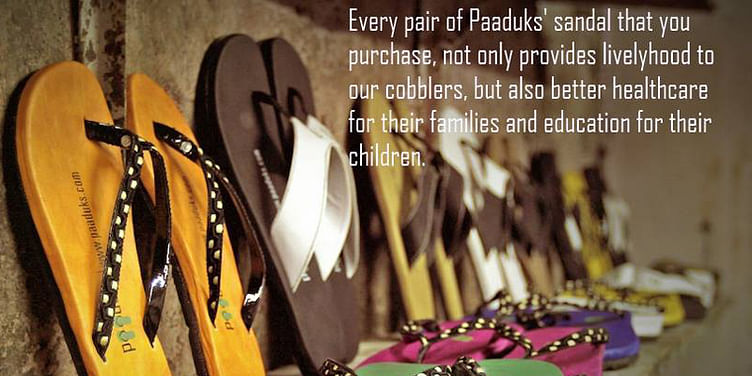 Inspiration takes various forms but rarely does it translate into tangible action. Jay and Jothsna Rege came across an article about a man in America who purchases scrap tyres from Indonesia and then uses those scraps to make sandals. Inspired by this man, they considered the positive value of an up-cycled product environmentally and socially. Then, they proceeded to set-up their slipper manufacturing venture “Paaduks”. Their endeavour is founded on bringing about social change. Not only do they hope to have an environmental impact but also on mochis, who are workers that make slippers for a living. The profit that the company makes is solely for the empowerment of the mochis who work for them.

“Paaduks was kind of an impulsive decision”

This is their second time foraying into the entrepreneurial world as Jay and Jothsna already own a venture that helps students with their education and career opportunities. “I would say that Paaduks was kind of an impulsive decision” Jay discloses. They were exploring other options for their second venture when they discovered the article and promptly got to work. Neither of them were familiar with the footwear manufacturing world but decided to give it a go.

They discovered that other mochis in Govandi, Mumbai already used scrap tyres as soles in creating slippers to send out to rural parts in Maharashtra. Apart from being just environmentally friendly, Jay and Jothsna discovered that tyre scrap soles perform the dual function of being harder to penetrate and protect wearers from foot injuries. The mochis in Govandi agreed to cut the pieces of soles for Paaduks. “Ideally, we would like to have Paaduks viewed as a durable eco-friendly product that believes in fair trade” says Jay.

When Jay and Jothsna Rege decided to embark on this entrepreneul journey, they went to Thakkar Bappa Colony in Mumbai for the purpose of research. The area has a large concentration of mochis. The experienced cobblers provided them with the expertise required to develop a manufacturing process. But they learned something else during their association with the mochis. “When we started working on this initiative, we realized that mochis and their families are plagued with many financial and social problems. Hence, we made a conscious decision to use the profits that we make to provide better healthcare for the mochis and their families and education for their children” says Jay Rege. They’re currently focusing on healthcare and education. The compensation given to mochis by them exceeds that of other wholesalers and retailers by almost thrice the amount. Jay and Jothsna want to prevent the exploitation of mochis which occurs because they are often poor, uneducated and thus agree to work for less.

Challenges and overcoming them

Talking about some of the challenges they have faced, Jay says that “The challenge is getting your customers to see value in your product. Most of them rarely care about what soles are made of or how the profits are spent. Design and aesthetics are factors that really influence the decision of customers.” They either have to compete with commercially available sandals or, they need to come up with a unique value proposition so that they are completely set apart from the rest. The challenge with the second choice is that it means targeting a smaller market system. Despite that, they plan to focus on the latter option.

The journey so far and what the future holds

So far, Paaduks has tried different types of sandals. They are constantly competing with their past model as they believe that every model can be bettered. A constant effort has been dedicated to improving their designs and models. There is a video about Paaduks that provides information about the product, they have participated in exhibitions, visited scrap tyre dealers and also made soles out of used airlines and truck tyres. To make their product all the more eco-friendly, they’ve researched on other eco-friendly materials such as cork and jute to add in others parts of the sandal. Paaduks recently participated in an exhibition, in which the offer was “Pay What You Want.” “It was an interesting and risky exercise to see what customers valued our product as”, Jay tells us.

Jay and Jothsna plan to provide some structure to their marketing efforts as well as have a dedicated manufacturing setup. Currently their cobblers work from their own places but they would like to have a Paaduks setup. Additionally, they plan to come up with a new model that would will have a tougher sole that is hand-stitched in order to revive the old-fashioned sandals that traditional cobblers made.

“Paaduks is not about making money”

“Paaduks is not about making money but making a difference is someone’s life. It is the feeling of having a positive impact in the life of others that keeps us going” Jay says as a conclusion. Help this venture continue making a difference by contributing to their crowd funding campaign here. It is uncommon for a company to tackle two social issues at once, but Paaduks doesn’t shy away.