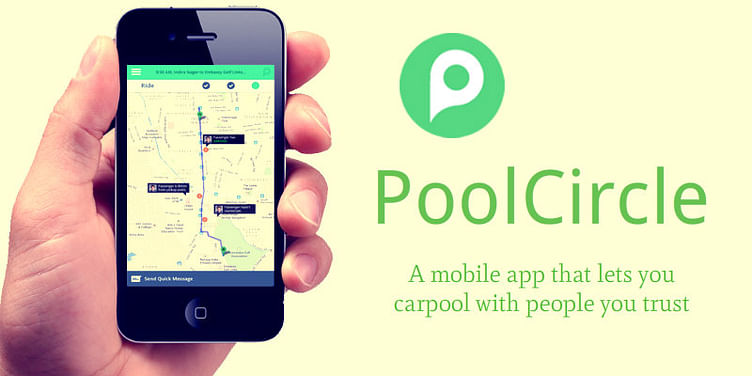 A few days ago, while I was waiting on a bus stop, I noticed several cars with just a single person inside. The next traffic signal would have taken some more time to send my way the bus that I wanted to board. This was the opportunity for a small survey of my own. I started a count. After eight minutes, I came to a staggering realization. 81 out of the 103 cars that passed by were occupied with just one person. I wondered who was to blame for all the traffic woes.

According to an on-road survey by PoolCircle, about 78% of the cars ride with just one person on a weekday commute. This is very close to my own casual observation. But PoolCircle, unlike me, doesn’t restrict itself to just the survey. It has a mission in its sight - a mission to take a million cars off the road, every month.

PoolCircle is a carpooling/ride-sharing network that helps users carpool with their trusted community - colleagues, neighbours and other social and professional connections.

“Bangalore alone has a 930,000 cars and our goal is to enable four people ride a car instead of just one. The name PoolCircle was coined from ‘carPool with your trusted Circle’,” says Raghu Ramanujam, Founder, PoolCircle.

After spending five years running his family business in steel pipes trading, Raghu made the move from hardware to software in 2000.He spent the next eight years at ZOHO building and managing ManageEngine NetFlow Analyzer, a product that generated about $18 million in revenue over four years. He then spent the next five years at InMobi, where he conceptualized and launched AdRoIt, InMobi's flagship product.

While working at InMobi, Raghu spent about 4000 hours commuting during his 5-year stint. Raghu credits working closely with people like Sridhar Vembu (CEO, ZOHO) and Naveen Tewari (CEO, InMobi), for his confidence to go after this significant every day issue.

“I decided to do more than just curse and hope that the Metro rail gets operational sooner,” he says.

The beta version of the app on iOS and Android was launched in December 2013 and the general availability of PoolCircle began in April 2014. Since then, the team has done a few interesting campaigns.

The user base on PoolCircle has doubled each quarter since January 2014. “The searches for carpools on our platform has grown 20X in the last 6 months,” Raghu adds.

On the enterprise front, PoolCircle has been launched at NetApp in Bangalore. On the apartment front, the team has conducted user awareness programs to promote carpooling at L&T South City and Alpine Eco apartments in Bangalore.

What differentiates PoolCircle in the market?PoolCircle allows the user to choose which network of contacts or "Circles" they want to carpool with - any combination of colleagues, neighbours and other social and professional connections, in addition to gender preferences.

“Carpooling, and in fact any form of peer to peer sharing, is a largely about trust. At PoolCircle, we are building a robust data driven user rating framework that will allow users to engage and interact on the platform more confidently,” explains Raghu.

Raghu talks about the PoolCircle team - “Our 2 Engineers Isaac Kingston and Premjeet Sharan come in with a solid background in Java and Android development. Our design and front end wizard Vivin Antony is a great combination of right brained design and left brained coding. All our team members have come in through our ‘project-as-an-interview’ selection process where they actually deliver a product module over 3 to 5 days. The first few folks who join a start-up take as much entrepreneurial risk as the founders and we are proud of our super committed team.”

Raghu had joined the Microsoft Ventures accelerator program in India as a mentor when it was launched. In a turnaround of sorts, he was also part of the same accelerator as an incubatee when he started PoolCircle.

“Our longer term vision is to be a marketplace for all peer-to-peer sharing/renting. PoolCircle aspires to be a sharing economy platform for lenders and borrowers, just as eBay brings together buyers and sellers. We will add more peer to peer sharing services, beyond carpooling, on PoolCircle over the next 12 to 24 months,” Raghu shares his vision with us.

Raghu credits his father as his biggest inspiration as an entrepreneur.

“The five years that I spent managing the family business along-side him between 1996 and 2000, was a great learning. I have seen him maintain an amazing balance across the good and the not so good days and stay grounded.

He was away at work a lot when I was a kid I certainly had lesser time with him than most other kids. That helps me understand the disappointment that my kids feel when I go home at 10 pm with plans to go back to the office after dinner.

It is a conscious choice that all entrepreneurs make and I am hopeful that my kids will understand in due course, just as I did. Kids are more adaptable than we give them credit for.”

Being a Product Manager inspires Raghu the most

“Product Managers have the capability to build products that change behaviour and improve people’s lives. In a way the products that we put out never sleep and someone, somewhere around the globe is always using those products and deriving value from it - that is an amazing high. Even after 12 years as a PM, I still cannot sleep on the night before a product launch.”

According to The Economist, peer-to-peer ‘Sharing Economy’ is expected to be a $26 billion market in 2017. Raghu’s appetite for risk might well pay off.

“Quitting my well-paying job at InMobi to start PoolCircle and to bootstrap it might be viewed as a risk too, but the drive to take a million cars off the road, every month and the positive impact that can deliver far outweighs any down side in this decision,” says Raghu.

“Imagine a world that uses less oil, pollutes less thereby leaving a better tomorrow for the next generation, imagine being able to spent less time in traffic and more time with family or at work, and most importantly, imagine a community where people trust more and share more.”

“It is OK to take vacations in Ooty or Munnar, instead of Europe or Australia for few years, if it means I can give a shot at changing the way people commute,” he signs off.

Do you have an idea or an innovation that will help solve the challenges of our growing nation? Checkout Mahindra Spark the Rise Challenge now!