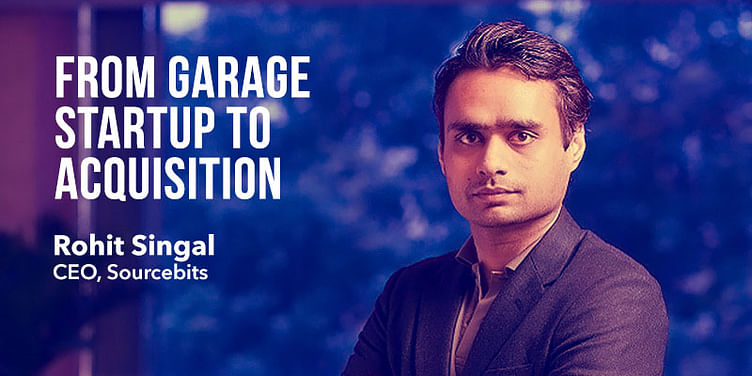 Last week my life as an entrepreneur hit a major milestone: Sourcebits was acquired by Globo Plc. It’s almost unheard of for a services company (Sourcebits provides mobile app design & development) to be acquired, and it’s even more rare for an Indian services company to make this kind of exit. But my career has been defined by a nontraditional path – and I’ve always believed the only way to make real change is to take chances. I’ve had more failures than successes, but absolutely no regrets. And it all began with a leap of faith.

After spending more than a decade studying medicine (radiology), I left my residency to rent a garage and start a software company. I had found my passion in technology, and believed in myself enough to take the risk. In 2006, after just a few months in business, Sourcebits launched our first Mac application –Fun Booth (under a development company name of Spoonjuice, LLC). It was a gamble to focus on a Mac app, but Apple featured us. As a result, a company called Freeverse got in touch to discuss a joint project. I hadn’t considered making outside apps, but the project sounded interesting.

With four employees in 2006, we entered a partnership to build a game and share the profits. (In 2010Ngmoco acquired Freeverse.) This was our first foray into services – and we had fun. But we also continued creating our own products, and I always pushed to try new things.

Night Stand, our alarm clock app launched in 2007, was the very first iPhone app from an Indian developer. We built the app long before a market for iPhones even existed in our home country, but we saw the potential iOS had. We bet big on native mobile application development, and it paid off.

Sourcebits has made more than $1 Million in revenue from Night Stand – and it also put us on the map for companies looking to hire app development services.

In the early days of mobile apps, many of them were ugly and clunky. Sourcebits stood out by focusing on design first. Outside interest in our “design-led engineering” approach grew quickly, and the services business I never imagined started booming.

By 2009 we were working with Coca-Cola to create the company’s very first mobile app, Coke Cheers. It looks simple now, but when the app went live on Jan. 4, 2010 it was a big moment for one of the world’s most recognized companies. And it was an exciting day for me. Sourcebits had grown from a handful of people in a garage into a respected services provider working with an iconic brand. And I was having far more fun than when I looked at X-rays all day.

Many services companies in India focus purely on profit margins. Find a process that works, and keep expanding your customer base for steady growth. But that’s never been my approach, nor the driving principle behind Sourcebits. Every year, I would embark on at least two experiments. From product concepts to service delivery ideas, we explored the possibilities. But the pace and scope was frustratingly conservative, hampered by running just on profitability. R&D requires investment.

So in 2011 I began seeking venture capital. It’s a rare move for a services company (so is R&D and in-house product development), but it was absolutely the right step for Sourcebits. The funding wasn’t just to scale up services, but talso o scale different models and try product ideas. Did I want Sourcebits to become a $100 Million company? Of course. But my measures of success weren’t just dollars and cents – I wanted to do services differently. I wanted to create a global brand. And VCs were excited by that vision for Sourcebits.

By May 2011 we closed Series A funding for $10 Million from Sequoia Capital and IDG Ventures. With the support of our investors, Sourcebits could now try out new ideas and create innovative products (like Twine and Twine Canvas) as well as various services models.

We moved our headquarters to San Francisco – a hub for talent and clients (success). Then we built studio offices around the country, but closed them within a year (failure). We explored a 50-50 partnership model (failure) which led to Product Studios (success) and our Innovation Strategy Workshop offering (success). In fact, in the year we’ve been conducting the workshops we’ve held more than 50. Many have grown into large, ongoing client engagements.

We’ve also gained recognition from two leading industry analyst firms – Forrester and Gartner – for our unique approach to services. In April 2014 Gartner named us a "Cool Vendor in Services," the only company focusing on mobile app design and development. Gartner emphasized Product Studios and our workshops as specifically valuable, unique offerings. And we wouldn’t have built those services without investing in experimentation.

Was it a direct path to success? No?

Was it challenging? Yes.

Would I do it again? Absolutely!

Without risks, we would never have really moved the needle as a company and for our clients. And Sourcebits today is doing better than any time in the past 8 years. With $8.5 million in revenue and $1.8 Million in EBITA that’s an EBITA of 21%. Our reputation and our profits are among the best in the industry.

So why did Sourcebits get acquired by Globo? Why am I leaving to start a new venture? The answers aren’t found in our financial reports. They’re found in my personal drive as an entrepreneur.

When I began considering the future of Sourcebits earlier this year, it wasn’t under duress or with outside prompting. Quite the opposite. Our profits are considerable and growing. Our management team is talented and stable. Our client engagements are interesting and successful. But I’m personally seeking a change. I want to build my own products – through mobile gaming apps studio Wandake – a higher risk proposition.

I spent a long time discussing the options with my investors and the Sourcebits team. Making an exit is a significant moment in an entrepreneur’s life – it feels like leaving home. But it’s a proud, joyful departure. Today everyone involved is happy with the decision to bring Sourcebits services into the Globo family.

I’ve always followed my heart – even when it’s taken me on the road less traveled. And that has made all the difference.

This article was originally published on Sourcebits blog

Rohit Singal’s Secret to Sourcebits Success: Think About Monetization From Day One