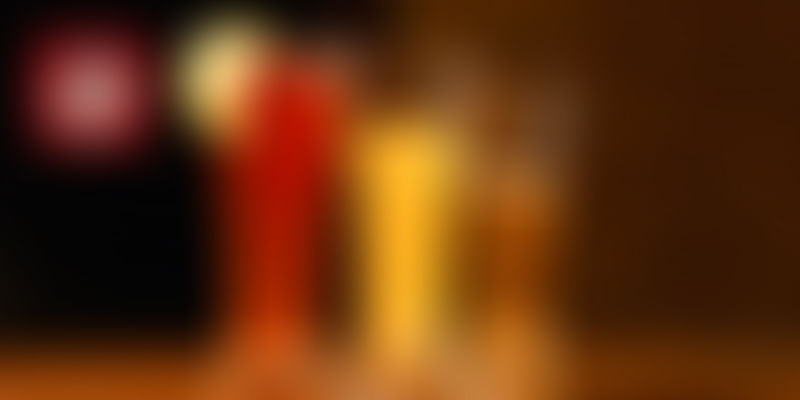 “Milk is for babies. When you grow up, you have to drink beer” - Arnold Schwarzenegger

What does it take to quit comfortable jobs in Singapore to pursue a childhood dream and build one of Bengaluru's most popular microbreweries serving about 2,000 mugs of beer on a typical weekend?

Seed of a thought

Arun George and Sibi Venkataraju were having a beer after work in 2008 at one of the microbreweries in Singapore, when the topic of India’s first brewpub Howzzat in Gurgaon, Haryana came up. Sibi had always wanted to start a restaurant of his own, and so Arun suggested – why don’t you start one in Bengaluru? This simple conversation was at the heart of how the team got together to create Toit.

By the time these friends firmed up their plans and sought partners, Mukesh was already running a successful restaurant Boca Grande in collaboration with Glen Williams of Sweet Chariot chain of pastry shops. When the friends pitched the idea of the brewpub, Mukesh, along with Glen, joined the team and together set about creating brand Toit.

The foursome raised the initial capital from family and friends to get things going. Toit was formally launched in 2010 after going through the various hurdle such as obtaining the relevant clearances and licences.

Interestingly, the team believes in a voting system while taking any major decision with respect to Toit. Further, the four co-founders have clearly owned responsibilities that together make the place run like a well-oiled machine. Sibi handles operations, Mukesh handles Finance, Arun manages Marketing, Branding & Event Management while Glen is responsible for the kitchen (so we know who’s behind the wicked menu). However, all the co-founders get their hands into every area of functioning to sometimes allow somebody to take a vacation. The team has also learnt to brew beer, even though they have a professional brew master.

On how it feels to start up with friends, Sibi says “It depends on what kind of friends you want to start with. It is all about the temperament and bond that you share – since we share a similar sense of humour, otherwise boring or frustrating situations can tend to become lighter”, referring to the long relationship that they share with each other.

And the crowd favourite is…

The ‘Toit Weiss’, a Bavarian Hefeweizen, is the most popular brew at Toit as per the founders. It is not an easy beer to get right, or get it like the Bavarians do. Sibi says “What allows us to get it made well is the fact that we have a German style brew house as well as an open fermenter that is used exclusively for this beer. Traditionally open fermenters were used to allow the bacteria in the air to help ferment the beer and this tradition still continues in Germany”. But in more industrial settings in Germany and like at Toit, open fermenters are used - in the sense that it is not a pressurised tank like typical fermenters, but a tank with a lid on it, although yeast is still added to it (can’t entirely trust the bacteria in the Bengaluru air!)

On competition and the newly extended night life of Bengaluru

There are 12 microbreweries in Bengaluru, starting with The Biere Club and Toit. The Toit team feels that it is a growing market and that competition is a good thing at this time, as they are all feeding the overall growth. In fact, they are really good friends with some of the other brewpub founders and look to collaborate to work together.

The founders of Toit believe that the nightlife extension during the weekends is great for business, but may not be so good for the weekdays. Since most people want to leave early on week days in order to catch up on work, keeping the establishment open till the wee hours even on week days is a tough thing to do.

They strongly believe that the reason behind their success is their helpful staff and loyal customers. They have even created a loyalty club for their customers, called Kudix Club.

In the four years since creation, Toit has become one of the highly rated restaurants and bars on various platforms like Zomato and Burrp.

Its never a dull day running the place – Sibi remembers funny anecdotes of customers asking them if the beer has been “freshly prepared” just a few minutes ago! The team is now looking to expand their footprint and open branches in Pune and Mumbai.

Have an interesting Toit story? Share with our readers in the comments below!