Are we on the edge of a new, collaborative paradigm? 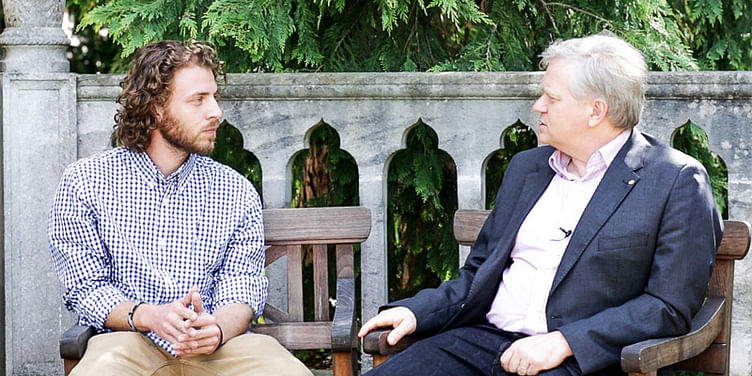 On June 12th of this year, serial entrepreneur Elon Musk opened up all of the hundreds of patents registered under Tesla Motors for public access. The action was one in line with the open source movement that has been around for a long time in the entrepreneurial community and has become the backbone of such companies as Mozilla, WordPress, Wikipedia, and many others. Having developed an almost cult following among innovators of all types, the movement embodies the progressive entrepreneurial philosophy of open access, transparency, and collaboration. Yet with the action of such a mainstream entrepreneur as Elon Musk, perhaps we should ask ourselves if the open movement is just a fad bound to remain in the frays of mainstream business, or a true revolution that places us on the verge of a new paradigm in business, innovation and knowledge creation.

Alfred Birkegaard Hansted, entrepreneur, filmmaker and candidate for a PhD in philosophy from the Roskilde University in Copenhagen, Denmark, is currently exploring this question through a documentary research project called Collaborative Society. Over the past few years, he and his wife Katja Gry Carlsen have travelled between Europe and Silicon Valley, California, capturing twenty-first century collaboration, from theory to practical application, on film. Along the way they engaged with communities like Labitat, Hackteria and Biocurious, groups working to provide open access to science outside of the university and corporate settings. They also spoke with leading minds in the field of collaboration, such as Vint Cerf, internet pioneer and Google vice president, Tiffany Shlain, founder of the Webby Awards, and Cameron Neylon, Advocacy Director of the Public Library of Open Science.

“I do believe that open science and open source is a reaction to closed business models and to science only reproduced and exchanged in closed circles,” explained Alfred in a recent conversation. “Open is a utopia – but we do need forms, borders and people we really can trust. Interdisciplinary and trans-disciplinary collaboration requires transparency, courage, but also a form of leadership… I think people are seeking real leadership and seeking to solve real problems and here collaboration is key.”

The documentary comes in the context of an age characterized by vast networks of digital connection, enabled largely by Internet infrastructure and the increasing mobility and affordability of information and communication technologies. These networks have opened up the means for people to connect, share information, and work together on an unprecedented scale, revolutionizing the way we conduct everything from science to business to social innovation. Yet despite the potentially game-changing implications of collaboration in twenty-first-century society, we must be careful, according to Alfred, not to overlook the challenges and pitfalls it carries with it.

“I am not sure if serious and critical collaboration can be a completely open process,” noted Alfred. “Transparent, yes; open to all, no… We must be careful not to turn open into ‘open-washing,’ as we have seen with the concept of green and ‘greenwashing.’ The same with collaboration – we have to keep it real and try to show how it’s done, instead of talking too much about it.”

In June, at the Euroscience Open Forum (ESOF), Europe’s largest general science meeting, Alfred joined with fellow documentarians at a session hosted by The Copenhagen International Documentary Film Festival (CPH:DOX) to premiere the first segment of Collaborative Society’s current documentary endeavor: Collaboration – On The Edge of a New Paradigm. The session was attended by a diverse crowd of players from Europe’s science and technology communities, many of whom see open science and open innovation as the best way forward in scientific research.

“[ESOF] triggered some good, critical and serious conversations and questions,” said Alfred. “As my good friend and one of the leading forces behind ESOF14, David Budtz, put it: ‘ESOF2014 certainly gives a glimpse of what we can do when we work together and contribute to a shared vision of international science and innovation… Collaboration has emerged as one of the most important drivers of new knowledge and scientific advancement.’”

Alfred and Katja plan to premiere the final cut of ‘On The Edge of a New Paradigm’ this November. Yet both of them understand that the movement, with its ongoing dynamism and diversity of actors worldwide, can hardly be summed into a single documentary production. Thus, the film is just the first stop on a long journey of understanding the realities of modern collaboration and communicating them to the world outside of its growing niche.

From Denmark to India

At the ESOF2014 bio-hacker space installation, Kopenlabs, former Bangalore resident and recent addition to the Collaborative Society team, Daniel Oxenhandler, hosted a session titled Unlocking India, in which he focused the conversation on how open science and open innovation applies to this complex and exciting country. It is here that Collaborative Society plans to continue their exploration.

Indeed, India makes an ideal case study in how collaboration might function in the modern world. As home to some of the world’s oldest civilizations, India’s rich, diverse history carries with it a tradition of holism inherent to a multidisciplinary collaborative philosophy. Though the country remains demographically fractured, many of its biggest challenges – rapid urbanization, extreme poverty and wealth disparity, environmental pressures, etc. – require dialogue and cooperation across its demographic divides. Here, new collaborative models that can extend across industries and sectors, as well as cultures, languages, and ethnicities, will be important to creating sustainable solutions.

“I do hope that we can go even deeper into our zeitgeist and understand the deeper layers of the collaborative,” said Alfred. “India is a very exciting culture and I’m sure we will get to encounter both wisdom and a culture that is undergoing radical transformation.”

Collaborative Society will make their initial filming and research trip for Unlocking India this month. Along a countrywide journey, they are hoping to connect not only with academics, researchers, and community leaders, but also with a small slice of India’s vast entrepreneurial community currently exploring open source, open science, and collaboration.

A call for collaboration

Elon Musk’s rationale was simple: his patents in the electric car market served less to preserve his competitive advantage than to stifle progress in creating a long-term solution to the carbon crisis. Indeed, his reasoning speaks to the heart of the open philosophy, that progress through collaborative innovation is more important than direct ownership.

“You ask, why do we have to take collaboration seriously?” Alfred reflected, in his conversation with YourStory. “If you think about the opposite: do you think that any single nation, any single discipline or any single company can solve the grand challenge, whether it is climate change or another complex issue we´re facing today? We know now the solutions are dependent on our ability to share knowledge and collaborate effectively, but how to do this, and how to combine the theoretical insights with the practical ‘hands on’ is still a grand problem unresolved.”

As the next frontier for the exploration of open innovation and knowledge sharing, India will provide insights into whether collaborative systems can transcend national and cultural boundaries and become a true global force. Yet in order to make this journey a success, Collaborative Society will need help connecting with the right people on the ground. Beginning October 20th, Collaborative Society will be travelling around India to discover and connect with people on the cutting edge of collaborative innovation. In the spirit of the documentary, if you want to find out more or to participate in the production of Unlocking India in any capacity, connect with them here.

Note: The author has recently joined the Collaborative Society team to assist in the production of Unlocking India.