Is the new app by Facebook an appropriate replacement for WhatsApp groups? 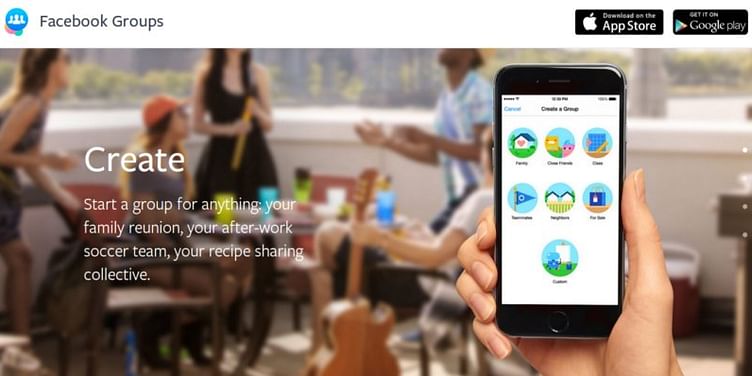 Facebook’s Creative Labs team has launched a new dedicated ‘Groups’ app. Don’t go by the name as it’s not meant to be confused with Facebook’s own Messenger chat groups. These are different Facebook Groups that we’ve got used to ignoring all these years. Sitting idle on the left sidebar of the website, always cluttered with notification bubbles, Facebook Groups haven’t particularly got as much traction over these years. At least, I for one have managed to avoid these groups as the web experience isn’t pleasing.

In an announcement the company claimed that over 700 million people interact with a Facebook group every month. That’s a huge number. So it was about time the company built a separate mobile app to build on to that growth by offering a better mobile experience. In fact, a comScore report suggests that mobiles represent 60% of all online traffic. Out of that, 51% accounts are for popular mobile apps like WhatsApp, Facebook, Spotify, and Viber, etc.

To put it in simple words, Facebook Groups is like using a mini-Facebook with the friends you select, minus the annoying FB ads (at least for now). At the start, you’re greeted with four icons on the top to browse -- groups, notifications, discover and settings. The first tab is where your groups are placed in circles and the app makes it simple to quickly create a new group with the + icon with a few clicks. The second tab, Discover, suggests public groups that Facebook thinks you may like based on the groups and pages you’ve already joined and where you live (let’s face it, FB knows more about your interests than maybe some people on your friends list). The last tab is the app settings.

WhatsApp has grown to become the most important form of mobile communication, right after phone calls obviously. But let’s accept the truth we all have our share of muted WhatsApp Groups. I myself have muted out three WhatsApp groups to avoid the constant flow of notifications (apologies my dear friends, I still love y'all). Particularly, after WhatsApp introduced the deadly blue tick marks as well as detailed time-stamp reports for group replies as well, my interest to even chat on groups has dropped.

That might be my personal choice but the experience on group has never been a good one. There’s no way to track who’s talking to whom. There’s no concrete flow of information. Just your friends bombarding forwards, memes or your embarrassing pictures. Even making plans on WhatsApp is a hassle. And your life turns to hell if you’re a part of more than 25 people group. If for some purpose you’ve left your data off all day and turn it on by night, you know the amount of unread group messages goes up to three digit numbers. It’s neither productive to spent time reading them nor is it possible to even understand the context of the conversation. This is where Facebook Groups enter to solve our problems.

Here are four key reasons why we need to persuade our friends and family to make the difficult switch.

We’re already accustomed to using Facebook. The traditional Like & Comment method is the best possible way to understand your friends feedback on anything you share; be it a text post, picture, video, check-in, forward messages, etc. In the new Facebook Groups App, that’s exactly how you interact within a group. You can post in the same traditional way you post on Facebook to the people within the group. Isn’t that also exactly the same stuff we share in a WhatsApp group? Yes, it is. But in WhatsApp, group feedback a.k.a replies are a mess. There’s no hub for an individual topic of discussion. Individual replies to anything you ask can get lost in the pile of other replies and finding an old topic of discussion is a nightmare.

In Facebook Groups, you share stuff as a post. A post can be liked, replied in the form of comments, hence providing hierarchy and flow of information. All your friends’ posts are stored as individual points of discussion which can be accessed anytime from the history just by scrolling down. In WhatsApp, even just 20-30 replies from your friends can get you lost. In Groups, these replies as comments stay hidden inside the post hence providing better clarity.

We share lot of random images, party pictures as well as funny videos within a WhatsApp group. Be it an image or a video, the only way WhatsApp allows you to view the shared content is by downloading it. Majority of the times, we end up deleting the downloaded content as we didn’t like it or didn’t require it stored on the phone in the first place. These downloads take a toll on your storage space. Thankfully, WhatsApp provides the option to turn off auto download of media. On the other hand, in the Facebook Groups app you don’t need to download images or videos to just view them. You can simply surf through whatever your friend has shared without the need to download and if you like it, there’s an option to save it to your phone. That’s also how we view our friends’ pictures on the main Facebook app. The same functionality extends here to Facebook Groups app and you don’t need to worry as your group is private.

Oh how we hate those never-ending WhatsApp group notifications! Even the company acknowledges that people hate them, hence the option to mute groups for even up to an unrealistic one year is present on the app. On the Facebook Groups app, notifications are dealt in a pretty useful and straightforward manner. You can individually turn-off push notifications for each group as well as completely turn-off notifications for all groups together. If you decide to turn-off notifications for a particular group, you’ll find the muted notifications once you open the app. The notification tab within the app helps you keep a track of things happening within your groups. Again, obviously that’s something you can’t do with WhatsApp. A message once read in a WhatsApp group cannot be found again easily. Whereas here you can find it again from the notifications tab. Another feature that helps better communication is Facebook’s friends tagging within the group that helps you directly get someone’s attention. Within a group you can pin multiple posts which is kind-off adding stuff to your favorites. That’s something everyone would appreciate having! Imagine a scenario -- your last year’s birthday wish by a friend can be seen even today as you had pinned the post. Turning-off push notifications entirely for all groups can be done either for an hour or until 8 am of the next day.

Haven’t you felt distracted by a WhatsApp notification when working on your desktop? Yes, we all have. Many of us have to work on desktops / laptops all day and it’s distracting to get pinged by WhatsApp constantly since it can’t work on desktops. Facebook Groups obviously can be accessed from the desktop. That’s where the app originates from. Majority of us have the Facebook tab open all the time (guilty as charged) and I can access the group right from the open tab without jumping on to my phone where I can be distracted by notifications from 10 other apps. And thankfully, Facebook Group notifications sync correctly in real-time. Something I checked on desktop will already show as read on the phone app and vice-versa.

Everything seems good for now with the Facebook Groups app. As always, there’s a ‘but’.

WhatsApp offers me all my group and individual conversations in one single app. Facebook on the other hand requires me to install two apps to do everything. Apart from the main app, I also need to install Messenger app for individual conversations which also has groups and this new Groups App which works as mini-Facebook without ads. I like both the apps over WhatsApp but I need to install them both. And Facebook apps aren’t particularly small in size.

As I continue to use the Groups App, I can conclude that this is the near perfect way of having private group conversations. It should work like a mini social network, everything in flow, and help me participate more in group talks rather than WhatsApp that discourages me to even open a group chat.

The only trouble is that you'll need to install a separate groups app, beyond the Facebook and FB Messenger apps that you may already have. It would've been nice if this Groups feature is merged into the Messenger app someday.

Nonetheless, Facebook's new app ticks off all the right boxes. All it needs further to do is make it cohesive with its current apps, and then it can have a killer mobile communication tool. I’ll wait for that day.

Kushang Dholakia is an Associate Editor for PriceBaba.com. He whips up slick graphics and brings world-class post-processing skills to PriceBaba videos. He is also a Moto convert, after upgrading to the Moto X 2nd Gen and is currently waiting for the Android 5.0 Lollipop update to hit his phone.