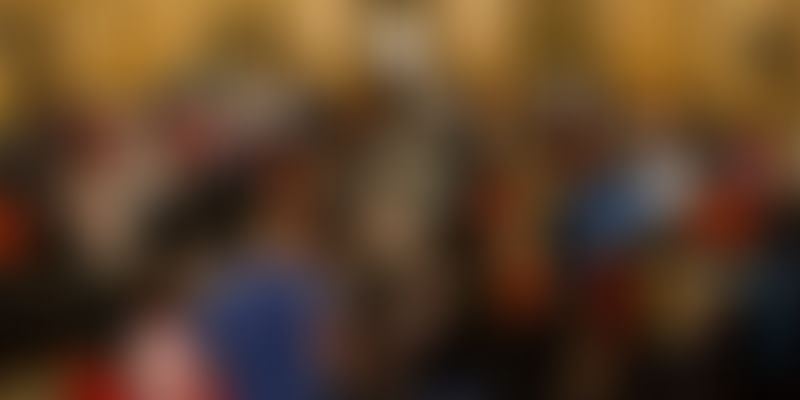 A Hackathon for Women was organised from 19th to 21st November, 2014, at the Lalit Ashok Hotel, Bangalore, India as a part of the 5th Annual Grace Hopper Celebration of Women in Computing India(GHCI) Conference 2014, presented by the Anita Borg Institute (ABI) in association with the Association of Computing Machinery India (ACM India).

With the aim of using technology to solve some of the humanitarian problems the world faces, a group of over 100 women developers, forming 16 different teams, comprising of software professionals and students from Bangalore, Hyderabad and Chennai got together for the finals of the Grace Hopper Hackathon 2014.

The Hackathon was spread over two days, with the prelims being conducted in three different locations followed by two months of extensive drills, where the teams worked on their apps before the finals.

During the prelims, the participants formed teams by networking and then brainstormed ideas to develop web or mobile apps. After that, they worked on the design and presented their project ideas before the end of the first day. Post the initial Hackathon event, the teams continued to collaborate and built a working software before the final GHC Hackathon event.

On the day of the finals, the teams were asked to develop a surprise element for the first half of the day followed by a demo of their apps during the second half of the day. The evaluation was done based on several criteria that included the relevance of the theme “Tech for Good”, coding standards and percentage of code completion, futuristic plans and impact to the community.

Winners of the Hackathon 2014:

“The mission of this Hackathon “Tech for Good” was to unleash the entrepreneurship potential in women where they could come up with an idea of their own, develop the app and also take their app further to the community creating a huge social impact”, said Ms. Shaila Srinivas, Chairperson of the Hackathon.

“This year’s Hackathon saw tremendous response and was a success right from the regional prelims”, said Geetha Kannan, India Head of Anita Borg Institute. “It is a reassurance to the fact that women in technology are here to stay. It is truly overwhelming to see the enthusiasm and the will power.”

Finding vacant seats under Right to Education (RTE) quota in the nearby schools for a particular area.

A Mobile app to help people to get away from the excessive usage of apps like gaming, social networking and at the same time donate for a social cause.

Providing timely alerts and awareness on the vaccination schedule.

Donate for Good is a web application which will help donors give away their stuff to NGOs who really need it. Application also allows NGOs to search and post their requirements and contact the donor.

The NGOs will be allowed to post the success stories so that donors are aware if the item is being used.

The “ExpertCare” app will send nutrition alerts through IVR calls to expecting Mothers in rural India where Internet has still not set foot. Based on their responses, they will receive calls to ensure regular intake of medication under the doctor’s supervision.

10. Medical Miracle – Medicine Miracle is a web based application which servers 4 purposes:

Most of the women are facing security problems day by day in order to resolve the problems they developed an application which broadcasts the location to the guardians. Once the application is installed, it will prompt the user to enter the guardian contact details.

This application automatically gets the exact location of the mobile using GPS for every call from the guardian.

This project enables Government authorities to take corrective actions by providing analysis of water consumption vs ground water level for a user/area.

There is no easy and quick way to report day to day problems like complaints against auto drivers, women abuse, bribe, fire , accident etc to the concerned department and make them aware of these issues.

The aim of this app is to bring a solution to the disturbances in human emotions caused by technology through technology. This is to help people suffering from various problems like stress, loneliness and short temperedness.

To maintain a healthy society by listing recipes based on ingredients, calories and health benefits.

This is a cross-mobile, cross-browser app that helps kids with self-learning, logical thinking, spelling pronunciation with a single source code.