[App Fridays] Crispify, an 'Instagram' for videos, automatically enhances the tempo and compresses videos on the go 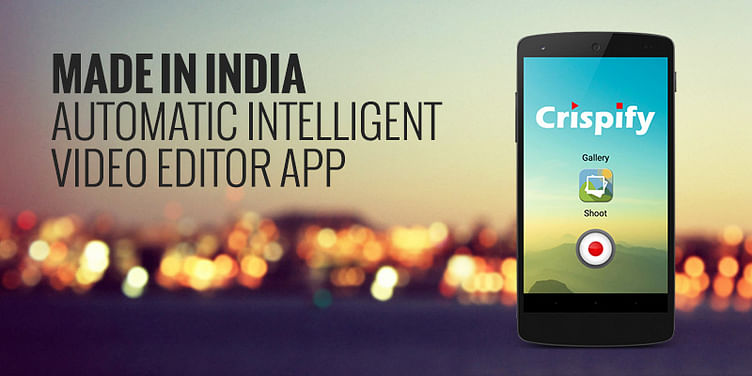 People like sharing digital content in the form of photos, audio recordings and videos through their smartphones, but sharing self-shot videos poses problems for some users.These videos in their original form either have long durations or are too slow paced to provide an engaging viewing experience. Hence, this is one of the reasons people avoid sharing them with friends.

Editing videos on the mobile is also not an easy task. It requires skill, effort and time. Indian developer Balaraman has come out with an app ‘Crispify’ to help people with this pain point.

Crispify is a patent-­pending, automated video tempo enhancement mobile app.The app automates the processes of video trimming and compression. It aims to improve the video quality by removing inconsistencies in the tempo of a video, compressing the file size, adding filters to make up for poor lighting. The unique aspect of the app is that it enhances the quality of video while also compressing the file size.

The app uses an intelligent algorithm which automatically cuts off the idle frames from the video and makes the video more ‘lively’ or fast paced. Users can either shoot their own video or select videos from gallery. At present, it works best for non-HD videos which are lesser than 20 MB in size depending on the capacity of the user’s device.

-The app does not require an internet connection to function, can be minimised and run in the background. Users will be notified when the video is edited and ready.

- Reduces time duration of the video which makes it suitable for mobile video sharing and consumption.

- Users can share the edited video to any platform from within the app.

While the app is free to download and use for B2C users, Balaraman plans to monetize through B2B partnerships by giving businesses access to the API and developing custom versions of the app.

Balaraman specialised in Electronics and Communications engineering and has more than four years working experience in video and audio codecs. He was also involved in making short films. During the process of editing these films he realized the challenges faced by people trying to edit videos, and decided to develop ‘Crispify’ for Android smartphones. His knowledge of mobile multimedia and the fundamentals in signal processing helped him in his endeavour.

He has developed and optimised codecs in multiple ARM processor platforms for mobile phone operating systems like Android, Windows, iOS and Symbian.

'Crab Steals GoPro' is a popular video on Youtube, but the original video is tiring to watch.Here is a comparison of the original and 'crispified' video.

'Crispified' video: Occupies 24.1MB with a video length of 59 seconds.

The app works as stated and has a simple and effective UI and UX, devoid of ads. While other apps such as Instagram’s Hyperlapse work only for videos shot through the same smartphone, Crispify can edit videos from any source, either from the users’ gallery or shot from any smartphones camera.

The ability of the app to run minimised in the background is an added bonus as well. For users who are new to video editing, the auto tempo enhancement feature is a boon as it is otherwise difficult to estimate how fast to accelerate a video.

Crispify is an easy to use app and requires no prior knowledge of video editing from the user. It is a useful tool for both casual and skilled users who wish to edit their video on the go with minimum effort.