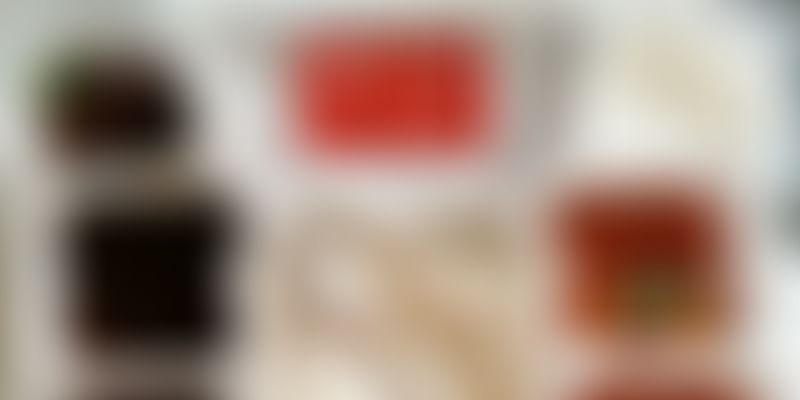 "People are looking for food. Can we give them food?" says Shashaank Shekhar Singhal about Tapcibo and it almost seems as if he's oversimplifying it. But that is precisely what Tapcibo has been about, to me (and some 300-odd other office-going folks in Bangalore), for the last three months.

When techie Monica Rastogi returned to Bangalore after her stint at the US, she observed that the city's busy working population had a mostly unhealthy lunch. Either they were having 'rich' food or expensive salads (or worse, skipping lunch altogether), and this demanded of them a daily fight against the 'Paradox of Choice' - there were simply too many options to choose from. There weren't enough places that catered to their tastes, or were healthy. There was a clear gap, a 'real' problem to solve - and that's when she decided to team up with Singhal.

To test out their hypothesis, the duo floated a pilot on Whatsapp in August, 2014. Singhal, who was heading Mobile Prodcuts for redBus then, asked his colleagues whether they would be interested in getting home-cooked meals delivered to them for lunch. At least ten people responded in the positive, and thus began the journey of Tapcibo. The orders were to be placed the night before, and home cooked 'cibo' - Italian word for food - would be delivered for lunch, the next day.

The duo worked on feedback, sat with food bloggers and chefs to determine the type and quantity of food. Surveys gave them an idea of how many Rotis (Indian bread) would suffice for lunch and if they should include Curd in the menu. Having tested out the need for the product, the technologists built the app in October, 2014. With the app, now orders can be placed just two hours in advance.

How does the app work

Once you download the app (currently available on Android only), the first screen will show you options for food. You have a choice of vegetarian and non-vegetarian meals and a few salads as well. Once you select your meal and the quantity (the first tap), you are taken to the next screen which shows your current location. Once you've selected the location (the second tap), you're taken to the checkout screen wherein you feed the exact address, if need be, and your contact details and confirm (the third tap). Your food is delivered to you within 2-3 hours. The next time you order using the app, you won't need to re-feed your details on the third screen.

Technology is at the core of what Tapcibo does. Both Rastogi and Singhal come with a deep knowledge and experience in building mobile products. Before Tapcibo and redBus, Singhal headed Products at a web firm, prior to which he had co-founded DesignChords - a web platform which used crowdsourcing as a medium to help businesses fulfill their design requirements. Rastogi was leading an Android team for an enterprise Business Intelligence firm before co-founding Tapcibo. She delved into Android dev early in 2010 with her own startup 'Explore in Android', which built apps in education category for toddlers.

The service is currently available for folks in the areas of Indiranagar, Domlur and Old Airport Road in Bangalore. The food is prepared in the kitchen located in the area and delivered within a five kilometer radius. But Tapcibo doesn't want to be just a home-cooked-food delivery app.

Tapcibo wants to be an on-demand 'food court' mobile app. "We want to enable smaller food entrepreneurs by enabling distribution for them via our app," says Singhal. Tapcibo essentially wants to be the 'Uber for Food'. With its app, the team intends to become the technology backend for these food entrepreneurs - small restaurants, eateries, bakeries etc. "By bringing in a technology intervention, we can help them with demand generation and distribution," adds Singhal.

Related read: We do have Uber for X in India too!

In terms of logistics, the team has well-trained delivery boys who have a tab on their person, and the technologists are working on automatizing the delivery and dispatch system.

A few pilots have already been undertaken. Just last Saturday, the app had an option of ordering Nutritown's (see our coverage of Nutritown) healthy salads.

Tapcibo currently serves over 100 meals a day via its app. In a short span of four months, the product has had 300 customers and Singhal claims that they have retention rates of 70 percent. "We started with ten orders a day, and today we deliver over 100 lunches," says Rastogi with a broad smile.

The startup has received an undisclosed amount of angel funding from Alok Goel, ex-COO, redBus and presently CEO at FreeCharge. Goel also happens to be married to Rastogi.

The team is working on standardizing the process, and bringing QC guidelines in place so they can expand their areas of operation. Singhal and Rastogi believe that with scale they can leverage data to recommend nutrition to their users and even be able to bring in 'demand predictability'. "With our limited data right now, we can already see insights like a demand peak on Wednesdays and Thursdays," Rastogi gives us an example.

A wallet integration is also in the works so users have an option other than paying in cash, the current mode of payment. In the next few weeks, the team intends to onboard restaurants, bakeries etc on to its platform as well.

"We have high engagement levels on our app. People keep checking our app in the evenings and on weekends, expecting us to have launched a new menu, or dinner," says Singhal. That augurs well for the app as it'll continue to add more options in the days to come.

The rise of food startups

The Indian startup ecosystem is seeing many startups related to the food sector bursting on to the sector. These can be primarily categorized into:

In Bangalore itself, several food startups have cropped up to satiate hungry Bangaloreans. SpoonJoy, that delivers cut fruits and is backed by Flipkart CXOs, NutriTown, that specializes in healthy and nutritious meals, and Brekkie, that takes care of your breakfast needs are just three of them. We'll increasingly see these players get on to the marketplace model, as distribution and logistics, factors that will determine scale for them, continue to be a challenge. Tapcibo is perfectly placed to fill up that gap.

"We've spent no money on marketing till date. The experience has marketed itself. We can do so much more with our technology. Just like to go a food court in a mall and you have limited-but-excellent food choices, similarly we're looking to give our users limited, healthy food options, and not overwhelm them with too many options," says Singhal. Technology is just an enabler, but it all boils down to one thing for Singhal and the Tapcibo team.

"People are looking for food. Can we give them food?"