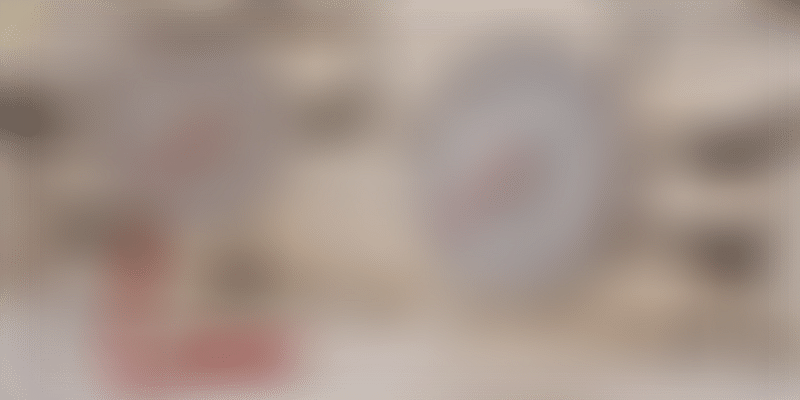 There were jungles and then there were concrete jungles. This composite material made from water, aggregate and cement is an invention of the modern world which has quickly surrounded us from all sides. Not many of us are conscious towards the implications this material has had on us since the industrial revolution but spare a thought and you'd realize the magnitude of it which is almost scary. Thankfully, there are efforts being made to reduce the reliance and proliferation but in the meanwhile, it is also important to give a different perspective to this material. And this is what the team at GOMAADS wants to do.

GOMAADS is the brainchild of Gopendra Singh, Malavika Singh Gupta and Aditi Sharma, who came together while working at the same architectural firm, ARCHOHM. A mutual love for design and material is what primarily brought the three of them together. Gopendra graduated as an architect and went ahead to get a masters, Malavika studied fashion and design while Aditi is an interior designer. Armed with the right training, the three of them worked as consultants in the areas of architecture, urban design, interiors, landscape and product design.

"In most people's opinion, concrete is just an ordinary construction material, but has a lot of depth and character to it. We were all fascinated by it and wanted to bring this out to the world to break concrete out of its traditional image," says Gopendra. With a lot of support and mentorship from Sourabh Gupta, who is the head of ARCHOHM, the trio decided to take a leap and started GOMAADS in January 2013.

They wanted to do something 'mad' with concrete and that is where the company name derives inspiration from. They decided to do something which is completely opposite in terms of how concrete is looked at. They started making small and delicate products which are hand made and as per specific requirements. GOMAADS now has retail partnerships with CMYK in Delhi, Amethyst in Chennai, Orange Bicycle in Bangalore, Artisans in Ahmedabad and many other outlets. Apart from retail partnerships, they are also online now with their own website and selling via marketplaces like SnapDeal.

The team brainstorms to come up with ideas for products that can be made with concrete. Post the decision, they experiment with the material mix and design specifications to come out with a mould which can be used for production. Some work like etching is currently outsourced but they have the entire production chain inhouse. A good product need about 15 days to be created and hence they've restricted their product range to 20 at the moment. After about two years of reserach, experimentation and getting comfortable with a product range, the focus is now on marketing the products and taking them out to a wider audience. For instance, their clock is something the team had to work on a lot but is a big hit. "It took so many iterations for us to finalize the angle at which the stand would be for the clock to be stable!" recollects Malavika.

Design and sustainability is also a strong angle for GOMAADS and it reflects in their products. For instance, the Green Ganesha uses an old fused bulb as a fuse, the Clock uses a CD covers, and they are also using things like ice trays and so on.

The manufacturing process has been a steep learning curve for the team though. "We invested 8-9 months into actually learning techniques and ways of manufacturing from concrete in the best possible way," says Aditi. The other aspect is the choice between practicality and manufacturability – they can't create products that are too difficult to manufacture because then they would not be able to keep up with the volumes. Over time, the trio also realized that they were able to attract audiences and make them curious for their products, but were still not able to convince them to buy. Over time, they've figured out what works and are getting better at positioning their products.

GOMAADS has a very linear business model and they don't claim to be doing anything revolutionary but their story is important for all the makers out there looking to do what they want and at the same time, have a viable business along side. This team has done something commendable with 'concrete' and in the longer run, they want to build more unique, quirky yet durable products made out materials that are not normally associated with décor.