Apps can tell you 'where' to eat, now there's one for 'what' to eat where 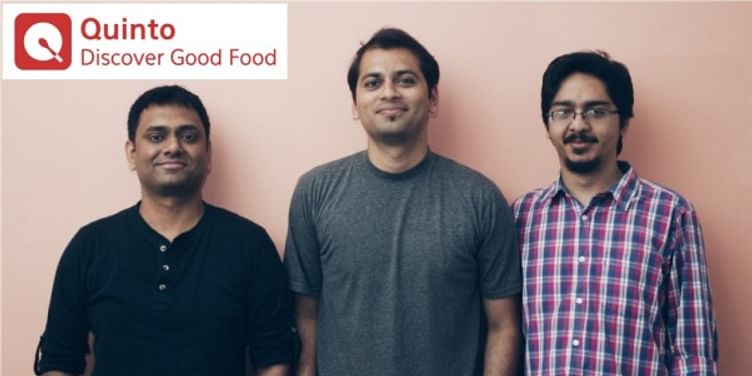 Sahil Khan is a Puneite for whom food means a lot. Back in 2008 when he was in college, Sahil started writing about his 'eating out' experiences. Once he got regular with it, a five star hotel invited him to review their food. Sahil realized he was up to something interesting and that his blog, 'The Tossed Salad' can become a lot more. He continued this till college after which he went ahead and started an egg speciality restaurant Yolkshire which was a great learning experience but something was pulling him back towards writing and the scale that internet provided. When he got back to writing, he realised a lot of his readers were asking about specific dishes- where the best biryani, cheesecake, kebab pav, etc. were? And this was the genesis behind Quinto, the venture we'd be talking about.

Around the same time when Sahil was running the Tossed Salad, Hrishikesh Rajpathak, a technologist working at Persistent Systems was trying to run a restaurant with a friend in Pune. This was Hrishikesh's first entry into the food industry and with the restaurant experience, he decided to quit his job to start working on something that would combine his love for food and technology. He started working on a tool that would mine purchase intentions from social media to create leads for restaurants and this is when he also noticed people were asking dish specific questions.

Luckily for Sahil and Hrishikesh, their paths crossed and Quinto was born (earlier called Dishoomit). Quinto uses the power of crowdsourcing to help users discover the best food options around – be it at a fine dine, casual restaurant, hole in the wall or by the roadside. Sahil has a way of explaining, consider the following scenarios:

Option 1: You search for pork ribs and you get ratings of pork ribs at four different places. You can see which one’s the better one.

Option2: You search for pork ribs and you get ratings of restaurants that serve pork ribs. You have no idea which place serves the better one.

Which scenario would you prefer?

Quinto is five months old now with a couple of thousand downloads in Pune. "40% of these are regular users who not only are discovering good food around them but are also adding to the content in terms of ratings and new listings, says Sahil. Building from Pune, Quinto is now expanding and launching in Mumbai. He adds, "We're currently focusing on extensively covering Bandra West, Andheri West, and areas around Colaba – we have 1500+ ratings on the app right now."As expected, starting up has been an uphill task. "Nerve wrecking but have to maintain a calm facade. Friends & family have been supportive of us. Have had to borrow money at innumerable occasions," they share. One of their early learnings has been to 'not outsource core work'. "While we had the capability of doing the backend, design, and content in house, we had to outsourced our app development. It almost killed us. We'd still have been better off if we'd taken six months to learn iOS & Android development ourselves," says Sahil. They've hired their first employee- Abhilash Sathe who'll be working on their Android app. Hrishikesh looks after the technology and the finances. Sahil looks after design, content, and marketing. Quinto also got selected for TiE Bootcamp where they have been refining their product.

One thing any startup in the food industry would now get is a comparison with Zomato. Sharing their thoughts on this, the duo tell us, "Zomato has done a fantastic job in addressing the use case of restaurant discovery and finding peripheral information regarding the restaurants. While Zomato definitely has the requisite mindshare when a user has to think about anything related to restaurants, Quinto is stepping in where the user has evolved in how he’s discovering food and his understanding of food in general." There have been efforts globally like Foodspotting (which got acquired) and a Oink but to take a bigger view, the area of detail is pretty new. Food tech as a sector has really picked up with food delivery being the most active one. Gurgaon based Yumist just received funding worth $1 million from Orios Venture Partners, Bangalore based Tapcibo and Eatlo are also picking up pace. For Quinto, the turf is different but once they grow, their model might see interesting plays with the bigger players.

Get Quinto on Android and iOS.