The one SimpleBra to bring them all, and in the darkness bind them 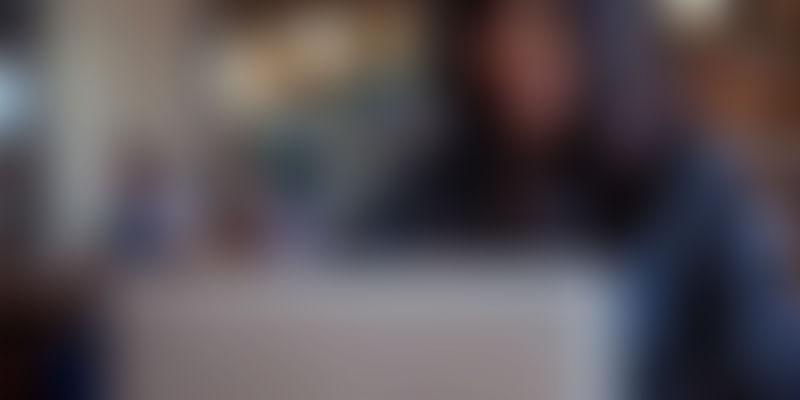 Three things have consumed Madhavi Jagdish's life: design, entrepreneurship and a quest to find the perfect brassiere. At 18, Madhavi landed in America, land of the free, but no country for wire-free bras. After finishing her further education, she ran her own freelance design business until diving headfirst into the pullulating startup industry of San Francisco. Eventually, Madhavi settled at Wanelo, a social commerce company.

On the side, Madhavi has always been entrepreneurial, but it always put her back in front of the computer, a chore she was doing ten hours every day at work.

In the summer of 2012, Madhavi found herself in the middle of London sinking in a quicksand of all the wrong bras. "I went from store to store trying to find the perfect combination of padded, wire-free and light-weight bras." Discomfited, she returned to the US only to be more disappointed. Madhavi simply wanted the bra she'd been wearing all her life- one that seemed to be a uniquely Indian make.

The quest, however, ended in 2013 when Madhavi decided to re-create the bra herself. The same year she incorporated SimpleBra, and officially launched the brand in June 2014.

After her futile London trip, Madhavi had tried 200 different bras and bought 50 that closely matched a prototype she'd already made with an old bra. "I began talking to manufacturers. I went to an apparel production seminar to learn more about the entire process of creating a garment from sketch to manufacturing, and to make some contacts in the industry.

"I collaborated with a seamstress very early in the process, too, where she looked at the construction of the prototype I had made. She gave me suggestions on what fabric and cup type would work best for the design I wanted. The apparel production seminar was also very eye opening. I learned about sketching, pattern-making, grading (where you scale the pattern up or down to make the different sizes) and production."

Once Madhavi got in touch with local manufacturers, she found the costs were too exorbitant and certainly not affordable for a startup.

She decided it was best to take her production overseas.

After receiving dozens of samples from factories in Asia and many more Skype conversations with seamsters, Jagdish finally found Doug, a manufacturing agent in Hong Kong. Having ensured the best materials were being used to craft this bra, it was only a matter of waiting. She sent him her prototype, designs and an image of the Carina nebula from the European Southern Observatory; he sent her the first samples of what would become the SimpleBra.

On May 2014, Jagdish received the final shipment.

The response was "phenomenal," according to Madhavi. In 2015, SimpleBra was also included in the giftbags to nominees of the Screen Actor’s Guild Awards, bringing more traffic to her website.

“I A/B tested the design of the website and when I implemented the new design I saw engagement go up by 200 per cent, but conversions go down. So, I reverted back to the old design. I plan on incorporating some elements from the new design so I can keep people browsing the site for longer.”

Madhavi's audience is small, but her return rate has been under 5 per cent, low for an apparel industry where numbers between 20-to-30 per cent are norm.

95 per cent rayon and 5 per cent spandex, the SimpleBra is a simple contraption. Madhavi had initially started experimenting with cotton, but the fabric frazzled after a few washes. However, she adds, "I have been getting samples of better cotton fabric, and hopefully one day I will be able to offer a cotton alternative as this is my personal preference as well.”

More than fashion, lingerie is an art. Under their clothes, women are walking canvases. Eventually, Madhavi wants to expand her collection to include more styles and prints (outside of the common floral) with matching knickers. Right now, a problem of voluptuous proportions is designing a wire-free, light-weight bra for the more well-endowed buyer. She says, “Hopefully, my product takes off and I am able to bring comfort into many more women’s lives.”

“I recently had an order from Italy," says Madhavi. "The shipping cost can be a bit high, so I recommend getting a few people to order together. Orders of five or more ship for free. I also have an order form specifically for India with a reduced price point and low courier fee.”

To Madhavi, the SimpleBra is versatile. Whether this is that one-stop solution all women have been waiting for is doubtful given women's penchant for buying as many different bras as possible. If the SimpleBra were to compete with established brands like Enamor, Amanté, La Senza, Victoria's Secret and Wonderbra, it hardly has any other option but to diversify its range, yet maintain its unique selling point: wire-free and light-weight brassieres.

In the end, for Madhavi, it's the joy of seeing friends and family use her product that makes the venture well worth all the hard work and risk.

“My friend bought a SimpleBra and was putting it in the laundry basket," Madhavi says, "when her four year old daughter pulled it out, wore it on her head and said, 'Mommy, how does it look?' My friend laughed and told her it looked great, but she had to wait for a few more years until she could get one!”

Meanwhile, for all those who don't have to wait, order your SimpleBra here.