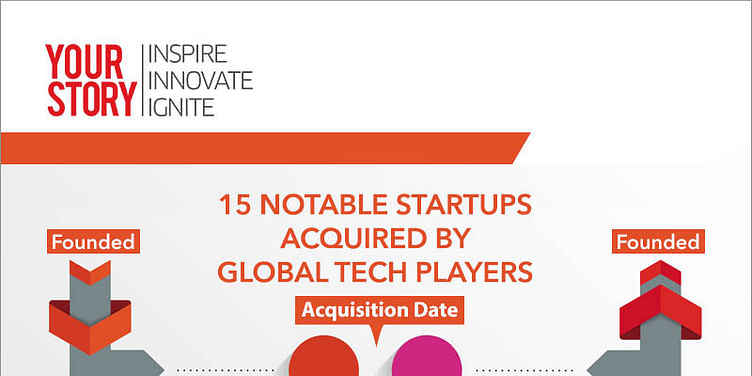 Here are some highlights of the acquisitions.

Naspers invested about Rs 8.5 crore in BuythePrice around Jan 2012 and around 5 months prior to the acquisition, later BuyThePrice moved from a pure ecommerce play to a marketplace model.

Tradus.com is an online auction company operating in Central and Eastern Europe. In March 2008, the company was acquired by Naspers.

Mumbai headquartered Jigsee was founded by Ray Newal and Areef Reza in April 2008, the company has its roots in Ottawa, Canada.

Jigsee raised Series A funding from the Indian Angel Network, Sequoia Capital. Jigsee got acquired by Vuclip in 2013.

Vuclip is the leading premium mobile video on demand service for emerging markets.

It got acquired by the Ibibo Group, a joint venture of South Africa's Naspers and China's Tencent in June 2013 for $138 Million (INR 800 Crore).

Ibibo Group is an online travel organization founded in January 2007 by Ashish Kashyap. The company is a subsidiary of South African media giant Naspers.

Bitzer was founded by Ali Ahmed, Indus Khaitan, Naeem Zafar in 2010, it had offices in Bangalore & California.

They received a funding of $4.83 million in 2011 from Acero Capital and Chevron Technology Ventures Investments and $1.5 million debt-funding earlier in 2013 before getting acquired by Oracle.

Ahmedabad based Cruxlight, was founded by Nirmit Parikh in November 2012.

CruxLighta web summarization tool automatically distills the web article to its essence thus helping the user get the gist of the article and was acquired by Kno, a Silicon Valley based startup.

Kno started out as a hardware business and later pivoted into software. In a recent development, Kno has been acquired by Intel.

Headquartered in Chennai, Prizm Payment Services was founded by in 2008 by Loney Antony.

Hitachi acquired Prizm Payment Services in November 2013 for $250 million, however no official statement was released.

Founded in 1910 and headquartered in Tokyo Hitachi is a highly diversified company that operates over ten business segments.

Little Eye Labs helped developers measure, analyze and optimize their app’s performance. After the deal the entire team of Little Eye Labs moved to California to join with their new team at Facebook.

Founded in Bangalore Imperium was founded in 2011 by Vish Ramarao, Naveen Jamal and Mark Risher

Imperium is a technology development and creative services company which engages in the design, development, implementation, and support of database systems for client/server computing environments.

Bookpad'sproduct, DocsPad, enables users to annotate, view and edit any document within a website or app.

Yahoo acquired one-year-old Bookpad in, Sep 2013 for about under15 million USD

Bangalore based iViZ Security was founded in 2006 by Bikash Barai and Nilanjan De.

Mumbai based TSS(The Service Solution) was founded by Sreevathsa P. in in early 2009

TSShad built cloud based CRM for after-market-support for OEMs and other service providers.

Before the acquisition TSS was handling customers support for companies like Micromax, HCL, Voltas, AnyData Technologies, Fly Mobiles and D-Link.

Headquartered in Bangalore, Marketelligent was founded by Roy Cherian and Anunay Gupta in 2007.

Marketelligent is a data analytics company that helps businesses make the leap from basic reporting to predictive analysis.

Converged Solutions is a Bangalore based IT distributions company founded by Michael Koh in 2009.

Converged Solution got acquired by Comguardin 2013

Headquartered in Dubai, UAE, ComGuard is a leading Value added Distributor in the IT security space.

Founded by Anand Rajaraman in 1996, Junglee got acquired by Amazon.

The shopping comparison site Junglee was launched in February 2012 by Amazon, to enable customers to find and discover products from online and offline retailers in India.

Amazon acquired Junglee in 1998 for an undisclosed amount.

**If there are startups we missed in this infograph, please comment your suggestions below. We'll add it on v.2