‘If trees gave off wifi signals, we’d be planting so many; too bad they only give oxygen’: The story of PatPai 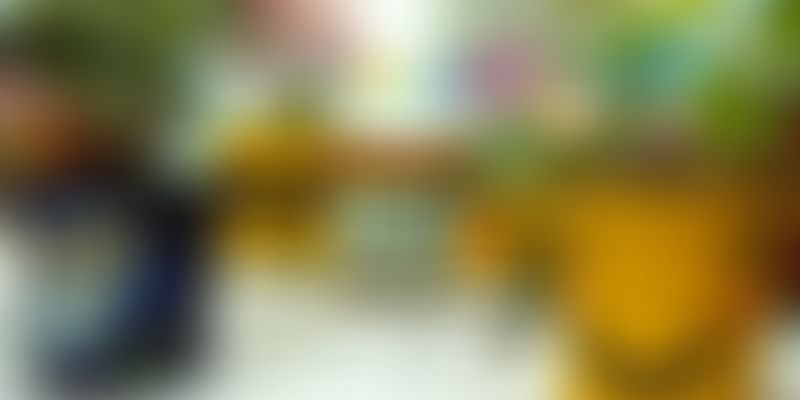 This story is based on a simple idea that could save the planet. A plant has a life but most often we just view it as an object. A plant is also an idea of a beautiful tomorrow filled with clean air.. When one gifts a plant to someone, one is actually gifting an idea too. Hence you just don’t plant a tree, you plant an idea. Mumbai-based PatPai uses an idea to highlight a plant and its importance. Patpai is an abbreviation for Plant a Tree Plant An Idea.

Rishabh Jain, the Founder of PatPai.com, tells YourStory, “It was Patpai that found me rather than me coming up with the idea.”  Back in February 2013, during a brief stint at Art of Living, Rishabh was supposed to sell a plant as part of his course. He did so by convincing an old couple to name the plant after their son, who was abroad, and convinced them to spend time with each other and the plant every morning.

In September 2013, while Rishabh was meditating, his mind created an image where he is handing over a plant to his friend who then hands over three plants to three of his friends and they follow suit creating a chain effect. The old couple came to his mind as well; their plant was now a tree bearing fruit. When he came out of meditation, he took some voice notes on his phone to make sure he wouldn’t forget..

“I am known amongst my friends as a person who comes up with a billion ideas but forgets them all over a period of time; this was one idea that I wanted to remember,” Rishabh says. That very day he met a friend who he discussed this idea with and to his surprise he liked it a lot. Soon, Rishabh started gifting plants to his neighbours and relatives and realised that they did not really value the plant much as it became a part of their already existing plant stock. Rishabh and his friend (now co founder) created a concept where the plant holds special value to the receiver and stands apart, rather than sit in one corner silently. “Co-founder Pratik Jain is one of the finest critics I have known; often our ideas are extremely polar but this helps us get to the best one,” he says.

Plants by themselves are very quiet. Unlike humans and animals they don’t have a voice to complain or demand attention. In order to give them a face, a personality and a name, Rishabh and Pratik came up with a very basic solution. Paint the pot so that people could connect with the plant.

“Imagine a house which has more than 20 plants all in black and brown pots and just one plant which is in a pot which has a smile painted on it. You would immediately notice the smiley pot. So, in order to get attention to the plant we have various designs painted on them,” says Rishabh.

The team began with Rishabh - Founder and plant expert – and Pratik - Co-founder and ideator. Now they also have on board, Rishabh’s mom Aarti Jain, who handles logistics, backend and accounts, and Dilip Jain who is an advisor. Aarti has an excellent skill of keeping things in place. When they thought of building up PatPai from an idea to a campaign to a company she was the best option for stock keeping and accounting. Rishabh says, “Creative people are the worst in accounts and accounts is very important in any company. Mom also manages the backend when it comes to timelines and deliveries.”

The founding team may consist of four persons but it is backed by more than 15 people. Rishabh says, “God bless every one of them whom I have pestered all through my journey with ideas. They have been the ones to take time out of their busy schedule and listen to my ideas, improve them, promote them, sell them and when I’m not around, even look after business. The team includes Karishma Rajani, Prakshal Parmar, Nikita Desai, Gunjan Utreja, Aneesha Khatar, Nisha Lulla, Saroj Javeri, Hitesh Amarseda, Priyanka Dhabhalia, Bhoomi Shah, Nehal, Shrey and Nikun.”

Changing the conversation around plants

PatPai’s mission is to bring a global consciousness about caring for plants. Looking after plants is one of the most basic things one must do; after all they purify the very air we breathe and give us the food that keeps us alive and going. Looking after babies and animals is rewarding as they reciprocate by making noise, wagging tails, smiling etc but a plant cannot respond in such a way. However, if you have to define love it would be to love without expecting anything in return. That’s what you can do with a plant. Love it and maintain it knowing that it loves you back but cannot show it. In our opinion, looking after plants is one of the most spiritual acts. It is also very relaxing. In cities, many people claim they don’t have space and time for plants. Rishabh says, “A single plant barely takes up the space of a football; we spend over 90 seconds brushing our teeth and over four hours WhatsApping people (mostly for fun) whereas it takes less than 30 seconds to water a single plant. So where does the question of space and time come? I don’t claim that a plant will solve Mumbai's problem of pollution but if every single Mumbaikar takes care of one plant we are talking about 25 million plants in the city. Now that can save Mumbai, don’t you think?”

He adds, “Our purpose is to reach out to as many people as possible for which we need just enough means. We have priced our products low only to attract those people who either do not care about plants, adopt plants or who have overlooked them. We want to make cool plants affordable. Everyone should have a plant in a designer pot. Right from the elite to the working class. Our products are priced from Rs 150 - 350. The smallest costs Rs150 which includes a hand painted pot, plant and packaging You can only imagine how low our margins are. We hope to sell in volumes to become a sustainable venture.”

B2B - corporates can incorporate plants within their system because of their vast infrastructure, network of people and financial strength. Even if they can shell out one per cent of their CSR activity on a plant campaign they can do a great job. The drive is to push corporates to decorate their steel and glass buildings with green plants. Gift plants to employees who can keep them at their desk or take them home

B2S - Patpai outreach to societies. If buildings an

d societal organisations can use green in their systems, they are the greatest influence on B2C and B2B.

B2C  - Where someone sitting at home or office glances at PatPai’s quirky plants smiling at them and eventually orders them.

Rishabh highlights the challenges PatPai faces. They are currently using e-commerce as a means to promote PatPai in India but have sales only in Mumbai. “We are a startup and currently courier companies are not touching our products due to its fragility and certain government laws. We are working hard to make distribution channels easier but that would take some time. So for now, we are promoting the idea via e-commerce.”

Rajul Mehta is PatPai’s main artist and head of art department. It is easy to ideate but more difficult to execute and she has executed lots of pot art ideas. She is a teacher at Billabong High International School and although she is pressed for time she has successfully painted over 1000 amazing pots.

Rishabh says, “We have given an open invitation to artists and have been joined by two more people - Pooja Gulechha Shahzaman and Alethea Fernandes. Both of them do a corporate job and are pressed for time but they manage their work well and churn out new designs and paint pots for Patpai. The audience absolutely loves the whole idea of customisation. There is not one person who has not liked our products. You should see people's faces at our exhibition. Their eyes widen at the sight of a plant winking at them or a plant wearing a tuxedo. We also take ideas to customise designs as per their needs. One of the earliest requests of customization we got was from a girl who was celebrating one year with her fiancé; all we could do was blush and smile.”

Before Patpai happened, the team knew nothing about plants, except what they’d learnt in school. At present they have broad categories of plants. Indoor and outdoor, flowering and non flowering within which they have subcategories like for utility and for show. Most of the plants they select are of a hardy variety which are easy to maintain. Keeping their target audience in mind they make sure people select plants that are not difficult to maintain, because once a plant dies it is demoralising for the person to adopt another one. PatPai’s plants require moderate sunlight and water and they are beautiful. This encourages people to get more plants after the success of one. They are getting more and more queries for utility- based plants. People ask for medicinal plants, plants to keep mosquitoes and pests at bay, air purifiers and now even those that serve a Vaastu purpose.

YourStory asked Rishabh if he'd like to say anything to the readers. He replied, “ Imagine if trees gave off wifi signals, we would be planting so many trees we could probably save the planet. Too bad they only produce the oxygen that we breathe. If you are reading this article right now, we sincerely request you to adopt one plant; give it a face and a name and look after it for a minimum of 40 days and share its joys.”