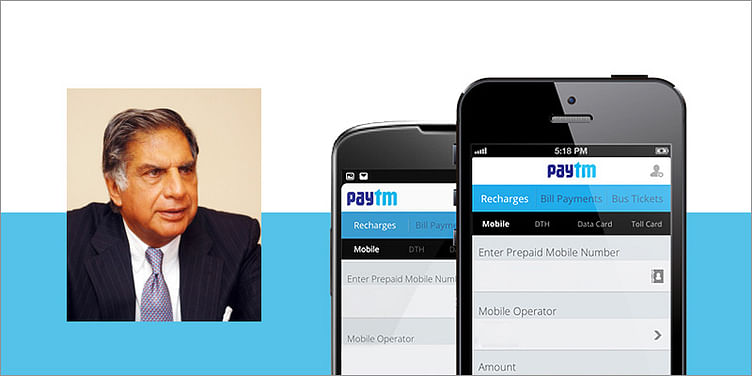 After Alibaba backing, mobile focused marketplace Paytm has raised an undisclosed amount of funding from Ratan Tata. This is the second investment secured by the Noida-based company within a month. Following the round, Ratan Tata will join the company as advisor.

Last month, it had announced a strategic agreement that will see Ant Financial take a 25 percent stake in One97 to support the growth of mobile payment and commerce platform in India.

At present, the company is doing $1 billion Gross Merchandise Value (GMV) with only 15% customers choosing Cash on Delivery (COD) option. In 2014, Paytm became the largest digital commerce company in India. Paytm is available across many popular mobile apps (like Uber, Bookmyshow, MakeMyTrip and FoodPanda) as preferred payment method.

"I am very happy that Mr Tata has put faith and trust in our values and mission. There is no better advisor for Paytm on building India's most trusted mobile payment and commerce platform," said Vijay Shekhar Sharma, CEO, Paytm.

In 2015, Paytm plans to cross 100 million wallet users and touch $4 billion of gross transaction volume on Paytm platform. “We plan to build 100 million wallets by this year end and we are already 25 million active wallets. Our average wallet balance is Rs 150 and we do one million transactions a day across Paytm app and other merchants (like Uber , BookMyShow etc),” added Vijay.

Starting from mobile payments, Paytm wallet allows consumers to buy mobile recharges, tickets, deals and shop across 18,000 merchants. The company also aims to bring one million SME merchants on mobile commerce platform and reach one million transactions on a daily basis by the end of 2015.

The patriarch of the Tata empire, Ratan Tata, has his heart set on Indian e-commerce. Before stepping down as the Chairman of the Tata Group in 2012, Ratan Tata had already setup RNT Associates which is his vehicle to make investments in startups.

Recommended read: Tata on the highway with startups

Besides Snapdeal, Bluestone and UrbanLadder, Ratan Tata also invested in auto classifieds portal CarDekho (the sector is seeing a lot of investor interest). Following Ratan Tata's interest in e-commerce companies, many growth stage ventures are now pursuing him to get onboard and increase their chances of survival as the consolidation game gets stronger.