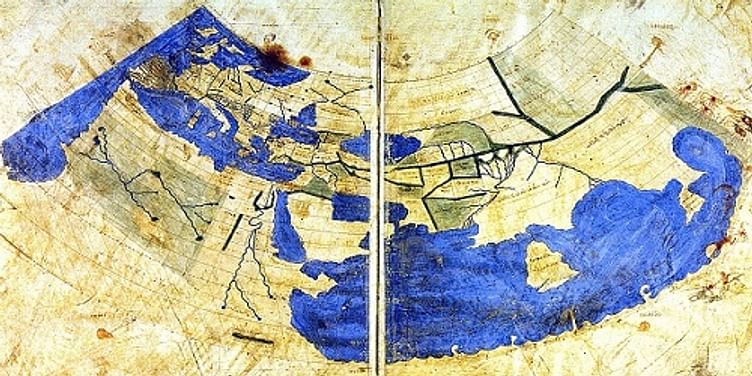 This article is primarily a weekly newsletter delivered to your mailbox every Monday morning. It is posted as an article to reach a wider audience. The newsletter sometimes has more information than the article and is a better way to stay in touch. Subscribe here.

Maps are fascinating. Cartography (the art of map making) can be traced back to about 8000 years! Starting as cave paintings to the modern 21st century digital mapmaking, maps have been used by humans across the globe. Here, take a look at this oldest surviving Ptolemaic world map which has been redrawn according to his 1st projection by monks at Constantinople under Maximus Planudes around 1300:

Since then, humans have come a long way and with the proliferation of technology, maps have become ubiquitous. To the point that every human move is being tracked.

So, when Boni Gopalan, co-founder and CTO of WalkInto wrote to YourStory, I decided to make make mapping as a subject of this newsletter. We look at a couple of startups and try to decipher what is happening in the world of mapping.

Based out of Pune (a Delaware corporation), WalkInto is a platform for creating stories based on Google StreetView. It is used by panorama photographers from around the world for both commercial and recreational story telling. For instance, check out: Oxford by Bernd Kronmueller, built on his photospheres published on Google views.

The mission for WalkInto is to build easy to use SAAS solutions that enhances Google Streetview user experience. Free for use in 2015, WalkInto intends to become a paid product in 2016 with $30 per tour per year. Very early days but it's a very exciting new field and the founders believe to have created a new market for content that was available for ever. "Our USP remains a easy as iOS editor as well as dedicated 24x7 support," says Boni. WalkInto already has an active user community which helps a lot in spreading the word.

Mapbox lets people design and publish beautiful maps. Think of their platform like building blocks- "Add custom markers and tooltips, give turn-by-turn directions, and then add your map to your website or mobile app. We make the blocks for you to snap together and build something awesome," reads their description. Mapbox can be used to make maps for check-in pages, applications or for tracking personal routes.

Based in the US, founded by Eric Gundersen, Mapbox is a venture funded company that entered India late last year. Mapbox is the mapping platform for thousands of websites and apps including the likes of FourSquare, Pinterest and National Geographic.

Apart from this, online real estate portals use several mapping technologies on the basis of which many like Housing.com, Commonfloor, etc. have been able to raise gargantuan amounts of money. For online real estate, the data is ofcourse the most crucial part but technologically, these companies have been doing work like the Slice View or Virtual Reality which revolves around mapping (a region).

Apart from these, there aren't many startups that have mapping or cartography as their central point but the possibilities are immense. And not just overpowering Google. Initiatives like Open Street Maps (on which Mapbox is based) which is a open source free wiki world map exist.

Does this pique your interest? Play around with some of these tools and tell us what you feel? If you know of more such startups, drop in a line to jubin@yourstory.com.

And yes, we had mapped the 60 awesome startups on the watchlist a while ago. That was using BatchGeo.