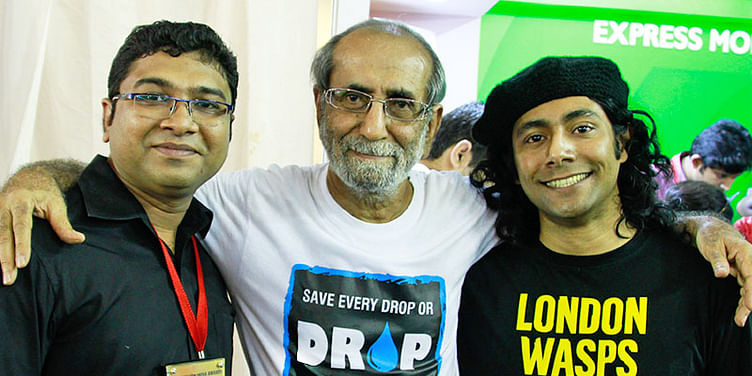 “Though I was born to a well-off family, my childhood was spent on the pavement, because our family had lost everything,” says Aabid Surti the National Award winning writer, cartoonist, and artist. Awarded the Lifetime Achievement Award at ComicCon, India, this year, Aabid is known for creating the well-known Bahadur comic series. He is also a novelist, a playwright, and an environmentalist, running the water preservation campaign - Drop Dead.

World War II and the birth of a cartoonist

It was the India of 1943, and World War II was raging across different continents. The Mumbai dockyard had a train that would go up to VT station, and this train would take soldiers. “We were a group of children who would run with the train. The soldiers would throw chocolates, biscuits, and half-eaten sandwiches; which we kids would pounce on. One day, a soldier was reading a Mickey Mouse comic that he threw at us, and I got a page,” says Aabid.

That was the beginning of a cartoonist. In those days, there were no comic books in the country, and it was something new and different. “Looking at it I thought, this is so easy, I can do this. So I began copying it. I got the technique of using one head as a measurement, and I began making my own cartoon figures,” says Aabid.

People saw his work, and felt that he should sell it. But Aabid had no clue about selling, until a school event showed him the way. Aabid was a boy scout at school and as an activity for ‘Khari Kamayi Din,’ the boys had to earn the food they ate on that day. Recalls Aabid: “The scouts would do jobs like boot polishing, or selling flowers. I thought why not sell my cartoons. The Times of India office was close by, so I walked into the office and went to the editor. I placed my work on his desk and stood quietly. He picked it up and smiled, and I knew that the piece was sold.” Cartooning became a source of income for Aabid.

A broken heart a writer makes

Aabid’s foray into writing began with a broken heart. “I fell in love in college; it was young romance, which was unrequited. Being an introvert, I couldn’t tell anyone anything, so I wrote what I could not express. That is how my first novel, Toote hue Farishte, came about,” says Aabid. He was living in a chawl during those days, and his growing pile of written sheets was being eyed by a kabadiwala. Eventually, Aabid sold the heap of papers to the kabadiwala, who had a link with a publisher, and sold it. The novel was published by Swati Prakash in Hindi and Gujarati.

Soon writing became another mode of income, “During that time I saw it as a means of earning, and it helped me support my art. I realised that anything that was creative came easily to me, so I started concentrating on my creative skills,” says Aabid. Today, he has written over 45 novels, seven plays, and ten short story collections.

Though several magazines and newspapers ran his short stories, it was with Taranga magazine that he did a serialised novel. “The editor was a good friend, and asked me to give him a book that could be published in installments - a story to hook the readers”, says Aabid.

To make ends meet, Aabid would do several odd jobs.And one such job was working as a spot boy for film shoots. It suited him as he could attend college and do the job. “One day, an assistant director saw me reading a Subhash Babu book and was surprised. When he learnt that I was a writer, I was made an assistant director. Later, I moved to scriptwriting and then became an editor. It was film editing that helped me understand the flow of story, and the way content needs to pass from one scene to another,” says he.

It is through scriptwriting that Aabid learnt the importanceof hooking the reader in the first ten pages: “This is very true for films. If you can’t hook an audience in the first ten minutes then you have lost them.”

Creation of Bahadur and the world of dacoits

During the Sixties and Seventies, there were hardly any Indian comics or characters, and several publications wanted one. “It was during this time dacoits were big in the country, so I decided to focus on them. I toured around the Chambal area: spoke to victims and tried to understand the modus operandi of the dacoits. I even met some fans of these bandits,” says Aabid.

Elaborating further he says: “The bandits would do small things and win several villagers over. There were stories around this. Through this they would get shelter and food. I did research on why they became dacoits and the reasons were varied, like injustice done by the police and zamidars.”

It was during this phase that Aabid read a book on dacoits by Taroon Kumar Bhaduri, and found the book informative.And this book helped him in creating Bahadur and the CSF.

Talking about the growing comic book industry Aabid says that he is pleased to see the graphic novel culture and the digital advantage of today’s technology. As a parting tip to writers Aabid says: “Learn from script writing about how to hook the audience soon.”