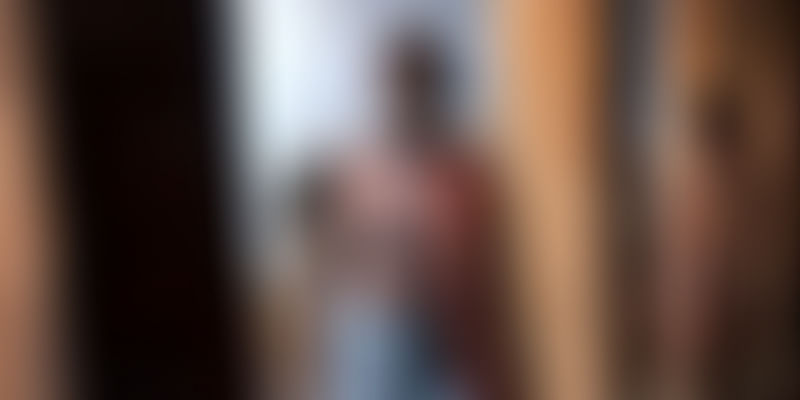 Rising from the shores of the Ganga, a long and narrow, almost vertical pan-stained stone steps take you up to the residence of the most famous undertaker  this side of the Atlantic.  He is the lord of Varanasi’s famed cremation ghats. His name is Sanjit but he is known by his honorific Dom Raja.

You are prepared to meet a billionaire because legends, (perpetuated mostly by journalists) have it that Dom Rajas make it big burning the dead and have luxury villas and cars across India. But at the head of the steps you stare only at a large hovel.

Deep in its bowels sits a short swarthy man presiding over half a dozen children, all idling shirtless in the morning sun. The man is almost half burnt. His bare chest is charred white and his left hand burnt so badly that it’s twisted upon itself at the wrist. “I am looking for Dom Raja,” I falter. “I am he,” he says blankly, wiping the sweat from his forehead with his crippled hand.

What a sad paradox you think, for a man in charge of burning the dead to roast himself alive like that at the job.

“Oh this,” he says, reading your thoughts and pointing to his chest and hand. “This is because of a cylinder blast at a wedding  six years ago.” There in the sun with his scars and with no vestiges of his rumored riches, he looks decrepit and pitiful.

It’s a big climb-down from the days of Kallu; his ancestor and the first Dom Raja who, according to Indian mythology, had kept the vow-abiding King Harishchandra as an apprentice.

Sanjit may not have inherited Kallu’s pelf but he has inherited his indelible cast mark. The undertakers are lowest in India’s pecking order. They are untouchables to be kept at a safe distance.

In the bazaar if I have to drink water I cannot touch the glass. They pour it down to me. The locals don’t allow me in their homes nor come to my place,” he says. To top it all, he is not allowed into the holy temples in,

he says. To top it all, he is not allowed into the holy temples in Varanasi, including the most sacred Vishwanath temple.

Ironically, however, the Dom Rajas are keepers of the sacred flame revered by all Hindus. No matchstick is used at the ghats. Everyone must use the sacred fire that has been burning for centuries in Dom Raja’s hearth. The fire and the burning at Varanasi’s ghats, as the Hindu belief goes, liberates one from the everlasting cycle of life and death.

Dom Raja is the leader of a two-tier hierarchy of Doms -- all of whom are given duties as per the roster.  The Dom Raja not only presides over any disputes at the ghats but he gets the maximum number of duties.

It’s not an easy job, Sanjit reminds you.  The stench of bodies, some having been kept in mortuaries for days and opened up for postmortems, is unbearable.  To drown out the putrid odour, Sanjit drinks copious amounts of local whisky. He claims to drink over eight bottles (each 250mls) every day. He says,

I’ve already had two since the morning. All Doms need to drink. The job is such. There is so much smell. What to do?

The two burning ghats at Varanasi, the Raja Harishchandra  Ghat and the holier Manikarnika Ghat swarm with Doms. They begin their funeral duties by offering a prayer to Kallu Dom. The Doms build up the funeral pyre methodically. To make sure the body keeps burning, they poke it with long poles from time to time.

The poor cannot afford to buy enough wood and their dead often remain half burnt. But nothing goes to waste at the ghats. The feral dogs exhume the leftovers.

The ashes are cast unceremoniously into the Ganges where another set of Doms neck-deep in the charcoal black water sift for any  valuables that can’t be taken off the dead -- like gold teeth or firmly embossed rings.

Sanjit is a far cry from the days when Doms held complete sway of the ghats. Some years ago, there were protests against the Doms who were accused of extortion. As a result, the Doms today can only charge for the sacred fire and cannot pester the pilgrims for extra donations.

Sanjit reminisces about the days when his brother, the then Dom Raja Rajit, held complete authority in the cremation grounds. He leads you inside a room where arranged against the walls are crude body building equipments. The Doms were known for their physical prowess and every Naag Panchami (snake worship festival) they make a public show of it, lifting impossibly heavy stone wheels and doing various acrobatics.

“We get strength from Lord Hanuman,” he says. But suddenly conscious of his fragile half-burnt frame he says, “I could lift these weights before this happened.”

Sanjit has no children so he is training his five-year-old nephew to become the next Dom. Lifting and swinging heavy weights is where the training begins. For now, the tiny Dom-in-waiting goes to school like every other child in Varanasi.