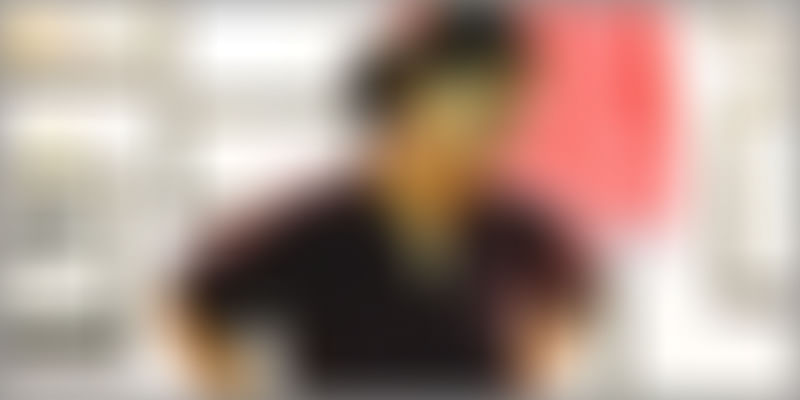 “I think my biggest blessing in life is that I was allowed to pursue whatever crazy idea I got into my head. My focus kept shifting, with periodic obsessions — one day I would want to be a zookeeper, another day I would want to recycle the paper in the house. I took these ambitions with utmost seriousness, and being encouraged to do so led to many interesting experiences,” says Ramya Sriram, Founder of The Tap, which according to her is, “a storehouse for stories that originate from my wandering mind and pondering pencil.”

The Tap stands for simplifying life into comics. It is about using visual vocabulary to break the barriers language presents. Ramya allows her imagination run free to create visual stories.

She had never thought she would end up drawing comics. But her random drawings of friends on Facebook (using a laptop touchpad), posted for fun got her the first break. A friend asked her to run a comic strip for his magazine. “The first order I got for a custom comic made me think perhaps this could be more than a hobby. I started taking my work seriously, putting more thought into it, finding different ways to express different stories, and playing with formats. I really enjoy the process of having to think for someone else and translate that into an illustrated story,” says Ramya.

At school in Hyderabad, Ramya was inclined towards extra-curricular activities like arts, crafts, music, and dance, always preferring piano lessons to PT classes. In spite of having the freedom to decide what she wanted to do she was not sure what academic path to choose once school was over. She ended up studying engineering from Vellore Institute of Technology, Vellore.

Again, after her graduation, she wasn’t sure what she wanted to do next. She found herself frantically applying to a variety of colleges, companies, and taking entrance exams. Eventually she settled to work as an editor in a publishing house, a job that she stuck to for over five years.

Working at the publishing house helped Ramya understand herself: “I edited books at work; and went home and drew comics. I proofread academic books; and went home and wrote travel stories. And that’s when I realised that drawing and writing were my constant companions, and my calling! It happened by chance.”

Ramya founded The Tap as a space to hoard stories:

I found myself sitting in client meetings itching to draw comics, itching to know what would happen if I had more time to devote to The Tap. So I finally took the plunge.

She turned all her complete attention to The Tap. Ramya feels that given the humungous support she enjoys from her family and friends; it is unfair to call her a one-woman army. “I have very supportive

family and friends whom I can count on to holler at visitors at flea markets to buy my stuff, to help me understand excel sheets, or tell me when my drawing of a cow doesn’t look like a cow,” says a grinning Ramya.Despite the love and support Ramya enjoys, she has had to buckle up and face the challenges that come hand-in-hand with entrepreneurship. “I’m terrible at saying no. Earlier, I would beamingly take up each and everything that came my way, sometimes at ridiculously low prices, without realising how much time and energy I was putting into it,” says Ramya. But later she understood later that it wasn’t a healthy way to work. “When you’re doing something you’re passionate about, you invest a lot in it. And it’s best to keep track of this investment, not only the monetary kind,” she says.

She is not very good at delegation, but it is something that she is working on now. Also to ensure that she did not run away from planning (which she is not good at) Ramya attended a course on entrepreneurship and developed little strategies for herself. Says she,

One of the things that really influenced me was the concept of opportunity cost. So, I apply that to big and small things alike. Every decision I make, I ask myself — what will I lose? And the lucidity of my answer to that question makes or breaks my decision.

As an entrepreneur Ramya loves the freedom of working on a variety of projects that involve ideation and creating content. She enjoys not being boxed into a routine. Though she does miss the chai/coffee breaks with colleagues and the liberty of taking leaves and running off to the hills – a few thrills of a full-time job.

As an entrepreneur she has realised that despite being a very ‘go with the flow’ person, laying some ground rules and setting small targets really helps. It keeps things real. Another important learning that she has had is: “I understood that it’s really okay to experiment with various things till you find something that you are comfortable with, not something someone else wants you to be comfortable with. Once I accepted that, things got much easier.”

The future beckons Ramya as she looks forward to more projects, more challenges, more drawings, and more stories! And she adds: “I also plan to expand The Tap merchandise range and add more to the online store.”

Here is a story from Ramya-