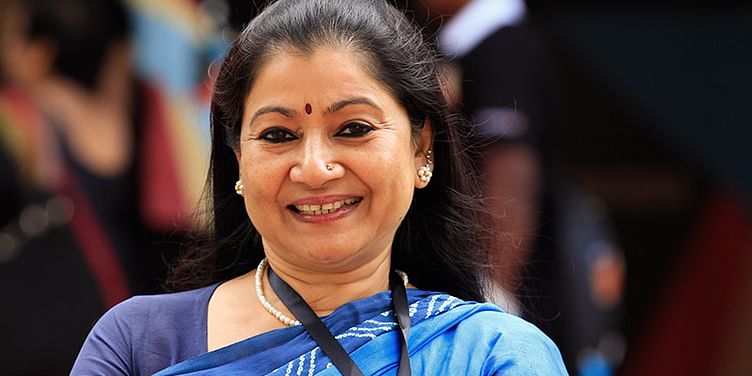 Dressed in a green and maroon South Silk, hair neatly tied up in a bun, a round big bindi on her forehead, Shukla Bose oozes confidence as she talks about her dream venture – Parikrma Humanity Foundation. Note the missing ‘a’ in the word Parikrma. “Well it is derived from its Sanskrit root word. Parikr’a’ma is more the Devanagiri version,” says this education visionary, adding humorously that she, after all, did her MA in Comparative Literature from Jadavpur University, thus, is expected to pay particular attention to these nuances.

Shukla is the Founder and CEO of Parikrma Foundation, whose motto reads, ‘A life on equal terms.’ This Foundation has a simple mission – to ensure that even the poorest child from the slums can access the best possible opportunities in the world. They started with a roof top school in Rajendranagar in the city with 165 students 12 years ago. Today, the Foundation successfully runs four schools in Bengaluru – Jayanagar, Sahakarnagar, Koramangala and Nandini Layout, imparting education to as many as 1,700 students.

The idea of working with the not-so-fortunate was deep-rooted in Shukla. In fact, she learnt her key lessons during childhood itself. A Bengali settled in Darjeeling, as her father was a bureaucrat posted there, Shukla’s mother was a ‘dedicated’ housewife.

“I was very precious to my parents, and particularly my mother. She conceived me after having five-odd miscarriages. One-and-a-half years later, my brother was born, but I continued to be the apple of my parents’ eyes. Gender limitations never came my way, and I had a fantastic childhood where I went to the best of educational institutions,” says Shukla. However, there were certain values passed on to her by her dad. Being the honest government official that he was, he refused to allow his daughter to take any of the seven luxurious cars parked outside their house; it was strictly for office use. As a result, Shukla had to walk six kilometres a day -one way- to her school.

“We had a very modest, frugal living but it was very inspiring to grow up in that atmosphere. I owe what I am today to my life’s various phases,” says Shukla who believes education to be very empowering. Perhaps that is why she was always a good student and believes that it has impacted her thought-process all along. College was in Kolkata where she stayed in a Boarding. “That was my first attempt at being independent,” she laughs. Marriage happened soon after in the year 1976 when she was 19 and moved to Bhutan where her husband was posted then.

Shukla’s first tryst with teaching children happened in the foreign land of Bhutan where she opened a school for the children of the Indian Army posted there. It was a great learning experience. She got hands-on experience of drawing up their syllabus, and managing everyday affairs at the school. The water there didn’t suit her too much, and she had to return to India. It was then that she did her Masters in Comparative Literature, and got into the hospitality sector. Alongside work, she finished her MBA, specialising in Sales and Marketing.

Shukla started her career at the Oberoi Grand in Kolkata, and steadily climbed up the corporate ladder. One incident that Shukla recalls is starting the first newsletter for the staff at the Oberoi. “It was an attempt to get them interested in the finer things of life. Often we do not know that the support staff is good at so many other things,” she says. This newsletter really did well. She could identify the connect she had with the staff. She even worked closely with Mother Teresa for seven years right from her college days. She started with the Nirmal Hriday (where they take care of the destitute people ), and moved to Shishu Bhavan to take care of abandoned children.

After a good 26 years of corporate life, Shukla thought she had had enough. “I was at the peak of my corporate career, but I decided to do something different- to ‘invite’ change in my life.” So in 2000, she bid adieu to her successful corporate stint, and settled for a less glamorous role – she started heading the India chapter of an international NGO. This NGO ran several projects in various countries, and as MD of the Indian chapter, she chose education as her project theme.

My name was struck off from the cocktail parties, but I didn’t really mind. My daughter and husband were both thrilled with my decision, and supported me. Nothing else really mattered. I moved to a smaller car and had to live with people’s pity for some time, but it was indeed a short period of time,

says Shukla. Once she tasted success there, she started Parikrma in 2003 with all her savings. The stakes were very high, but she believed in her idea, and was able to successfully get over the struggle.

Apart from the fact that she brought in the best corporate practices into her venture, the fact that she listened and was able to motivate a small core of people gave her hope of being able to reach her goal. Hard work and the passion to create collaborative ambition was the glue that held them together, and Parikrma sailed through. Today it has earned accolades for itself. The alumni is doing extremely good, proving that with the right vision and guidance, success can surely be attained. Parikrma Humanity Foundation is now a chapter included in Cornell University and IIMB.

Reading is Shukla’s passion, and she is currently finishing Clementine Ogilvy Spencer-Churchill’s biography. Written by their daughter, Clementine Spencer Churchill is Sir Winston Churchill’s wife. Shukla loves to cook for her family, too. So a typical day starts at 4.30 am just to ensure that she has time for herself, and cook, too, before stepping out for the day. She does follow a few soaps and serials on television. She has five dogs at her home, and one each at all the four schools, and she loves to trek.

Shukla has three role models – Mother Teresa, Sir Nicholas Winton (a British humanitarian who organised the rescue of 669 children from Nazi-occupied Czechoslovakia just before the Second World War) and Dalai Lama. “It is their simplicity and humility which attracts me. Their lack of self-image makes them great,” she says.

She has one personal dream – to be wheeled into a school assembly at 8.15 am 20 years down the line. “That school would have been started by a Parikrma student,” says the students’ favourite ‘Akka’.