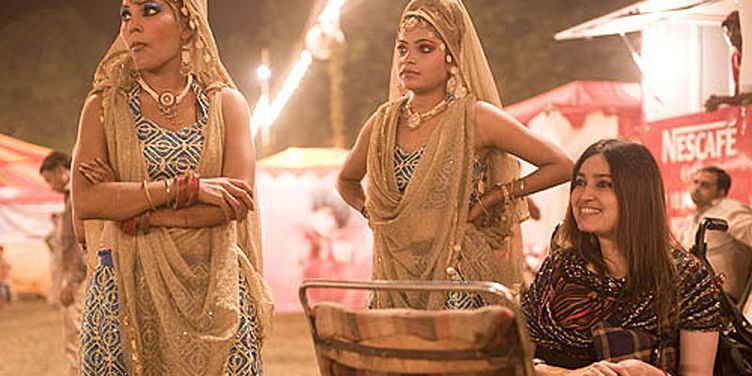 At the age of three, Ritu Rawal contracted brain fever and was paralyzed from the waist down. So when she expressed her dream of becoming a cop, it was summarily dismissed by all and sundry. She could not pass the physical rigors of the job, it was generally concurred. Next, her desire to study for criminal law was thwarted similarly.

Ritu then promised herself that she would not only take up a profession where the use of legs was required but also excel in it.

That’s how Ritu Rawal, 45, chose a field where shaking a leg means everything. She became one of the better-known choreographers in New Delhi, with over 1500 stage shows to her credit. She even had a dance troupe – Thunderballs - which participated in road shows and video-album recordings of singers, including Richa Sharma, Daler Mehndi, Jassi, Jaspinder Narula, Mikka and Abhijit.

“Thunderballs was the only Delhi-based dance troupe which excelled in many dance genres, including fire dance and jungle dance, etc,” she says.

Forever challenging herself and not content to sit on her laurels, Ritu wants to try her hand at everything. She gave up her full-time choreography practice few years ago to become a real estate consultant. “My mother died a few years ago and I was completely shattered.” I could not keep the odd hours that dance choreography requires,” she says. However, many old clients insist she choreograph their shows. She is invited to judge many dance competitions and speak at many educational institutions across India.

So how did she teach dance to others when she can’t even step out of the wheelchair without help? There were no short-cuts, of course, she says. The road to success was as usual bumpy. But Ritu has phenomenal grit to see her through.

I have been fascinated by dance since childhood. I loved watching movie-stars dancing in movies and would make notes on their dance moves. I have never danced in my life but I like to see other people dance.

Ritu would frequent discotheques and enjoy watching others from her wheelchair.

Trained at the Indian Institute of Fashion Design (IIFD), Ritu made friends from the world of glamour and modeling. When they would dance she would suggest them dance movements she had remembered from her endless hours of observation. “They danced according to my suggestions and discovered that these dance moves were innovative,” she remarks.

Dancing to her own tune

Soon these friends made a small group of female and male dancers who began to dance to her tune regularly. Encouraged by the response, she formed a full-fledged dance troupe –Thunderballs - in 1996. “Since I could not dance myself, I experienced difficulty teaching the movements. I would make cumbersome diagrams on a piece of paper to explain,” she says. However, with time the dancers were able to pick up her directions. She had names for each dance step like Mithun-step, Jackie-step, and wing-step, etc. Soon the dancers were able to understand. Thunderballs comprised about 25 male and female dancers, all personally trained by Ritu.

Besides teaching dance, she trained models to walk the ramp and choreographed fashion shows. She coordinated for over 1000 models in Delhi. Five days a week, she taught dance in a hall, which she had named ‘torture chamber’, in her house in East Delhi. Known to be a hard taskmaster, Ritu made her dancers practice for over 10 hours at a stretch.

Famous singers were charmed by Ritu’s choreography and dedication. She was not only their favorite choreographer but also a good friend. As for Ritu, it was Richa Sharma she liked to work best with.

Ritu is the only child of her parents. In the beginning, they were devastated by her physical condition but with time they learned to accept it.

Despite her success in choreography, Ritu still has regrets that she could not become a cop or a criminal lawyer. She, however, feels that people’s attitude towards the disabled is changing.

I used to get a lot of comments from passersby, especially women, who would say, ‘bechari she is so beautiful but crippled’. But now I hardly get to hear such comments and people are helpful.