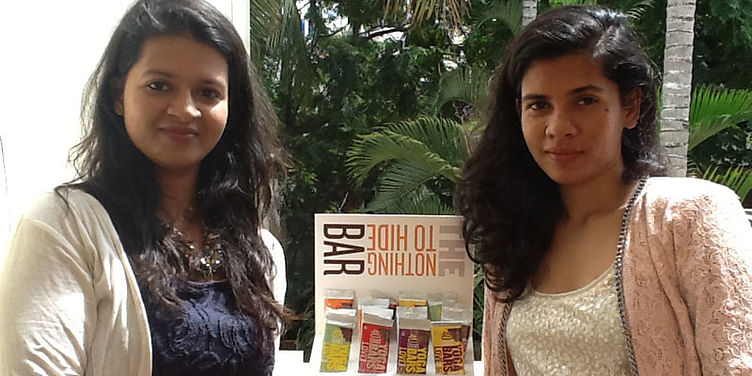 Have you heard of ‘Yoga Bars’? They’re not bars that help you try out some difficult asanas. They’re not organic soaps. And they’re definitely not bars where you can swig a few pegs of alcovedic cocktails! No, they’re rich, crunchy and wholesome on-the go energy snack bars made from natural ingredients. Started in August 2014 by Suhasini and Anindita Sampat Kumar, the idea came to the sisters after a particularly gruelling hike.

At that point, both Suhasini and Anindita were working in New York, where the market for on-the-go energy and snack bars is big and diverse. Before Yoga Bars, Anindita worked at Ernst & Young, whereas Suhasini was in the middle of an exchange programme at Wharton Business School. Suhasini would regularly travel between Philadelphia, where she studied, and New York, where she lived. “My sister would give me these energy bars, which were very filling for the journey,” says Suhasini.

Their experience in America made the sister’s look at the energy snack business more seriously. They knew they wanted to set up their business in India, because they’d never found any healthy options here. After visiting places like Whole Foods in New York, they realized that there were many good food alternatives, which could be produced in India, as well.

After coming back to India, their eldest sister, Aarti, gave them initial funding, after which they began reaching out to people for insights and feedback. “Everyone was really helpful; the first recipe we received was a person we wrote to on LinkedIn,” says Suhasini.

In India, there is a lot of encouragement and support to carry out a great business idea, whether it was getting the products right or setting up the initial team. We got our grants for setting up the manufacturing facility by the government very easily. Vijaya Bank approved our loan on the basis of the grant taken in from the government. So the government basically acted as our guarantor.

The three main things Suhasini and Anindita decided the bars would have are:

All the ingredients for the Yoga Bars are sourced from different parts of the country. For example, if a state is famous for cardamom or any special ingredient, they’re only procured from that region.

Suhasini adds that, unlike other players in the market like RiteBite and Nature’s Value, they do not add corn starch, additives or added vitamins. However, this means the shelf life of the bars is only three months. It brings in a lot of retail returns, and the sisters are willing to take the chance to avoid compromising on natural product ingredients.

Speaking on how the products are manufactured, Suhasini says that they wanted their own system in place. It took them six months to gather the right capital for setting up the business, manufacturing set up and another six months to find the right people who followed their vision. It was challenging to convince retailers to buy their products.

They worked for over two years with over 50 bakers across the city to finalise the recipe for the products, then breaking it into steps. To settle on the right machines for manufacturing, they travelled different parts of the country.

Business in India is especially different; you need to meet the people, consult them and do a lot of footwork. While it is very exciting, it is a lot of hardwork,

Both girls wanted a clean space, which they fortunately found in Domlur Industrial Area.

Yoga Bars targets a market age of 25 to 35-year olds, who lead a reasonably active, busy lifestyle, with a higher concern for their health and well-being. These people, according to Suhasini, are the ones who’re looking for healthy snacking opportunities.

Overview of the market

In fact, if you look at the numbers, the food bar market, especially the market for cereal/granola bars and energy/nutrition bars, is projected to be close to USD 8.3 billion by 2016 in the US.

Other brands like RiteBite and Nature’s Value, too, have begun gaining popularity in India. These brands were established around 2005-2006, when the idea was relatively unknown in India. When the duo launched ‘Yoga Bars,’ the timing in the Indian market was simply perfect. Today, with a growing market for fitness, and close to 40 per cent of Indians looking for health and fitness-related products, Yoga Bars falls bang on the target market.

According to Suhasini, the space for health foods is especially getting bigger. She believes that with the number of food tech startups receiving funding, people are clearly looking for quick and healthy snacking options. “Ours is more of an FMCG segment, but we can definitely take up a big size of the confectionery and biscuits segment,” says Suhasini.

Currently, Yoga Bars is available very few retail outlets in Bengaluru like HealthKart, BigBasket, Godrej and Namdhari’s. They are also available at big corporate offices like Google, LinkedIn and InMobi.

In the beginning, Yoga Bars went with an outsourced packaging design. They still think it’s a great design, but want to add more thought to it. They want it to ooze out what Yoga Bar stands for: energy, calm, love, taste and good health. “We want to add all these when the actual store rolls out later in July this year. We want a complete branding solution. By then, we also plan to be available across all stores,” says Suhasini.