How a robot designer, a sales analyst and a biker created Barrel Exhaust 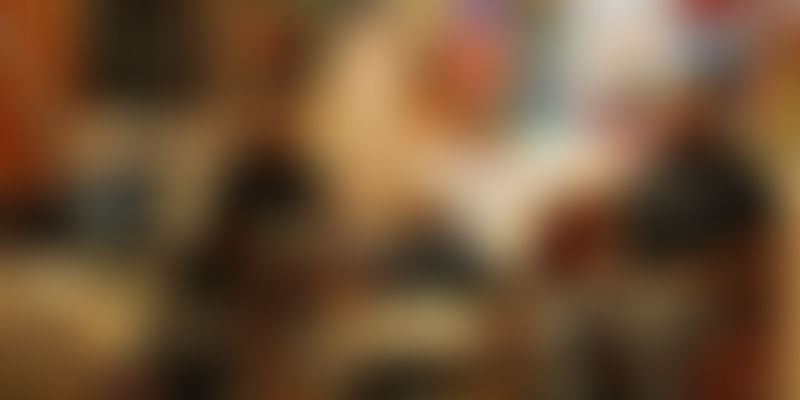 The sound of explosion in cylinders pushing pistons up and down. The flame spreading from the spark plug to the cylinder. These things are exhilarating to bike lovers. It was such a passion for bikes and automobiles that brought about Barrel Exhaust, a startup that builds biking accessories and bike exhausts. It was established as an entity in January this year.

“It all began at a startup weekend meet at The Prost Pub, Bengaluru, one Saturday evening. The place was packed with people, young and old, discussing their ventures or ideas. I saw this geeky guy in withered jeans and a cool t-shirt talking to some people about something I couldn’t quite hear, even sitting across the table,” says Giridhar Soundarajan, Founder and CEO, Barrel Exhaust.

After getting a drink, I switched my seat, happening to sit beside him. We began a conversation, and exchanged stories of the projects that we were working on, or had already built. Soon, we were so excited about each other’s work that I asked him to meet me the next day at a coffee shop. I saw so much potential in him. It was on that day, in the coffee shop, that I founded Barrel Exhaust with Roopak Raj.

Giridhar began his corporate career in 2005 and worked as a sales analytics consultant at HP in 2009. During those days, he did not find many of his assignments interesting. So he started to look for ways to make his job challenging and interesting for himself. One such effort even earned him an ‘Einstein Award’ at America Online. “I was not happy with the way I was using my day at the office and I knew I could do more,” adds Giridhar.

Inspired after seeing his brother Pradeep Soundarajan’s work in starting his own organisation, Giridhar put down his papers and decided to do something of his own. This was in October 2013. For the first time, Giridhar was out of a job. The need for a source of income led him to build a social mobile app called ‘Reminds Me.’ However, the venture did not succeed and he ‘burnt his fingers.’

He then tried to build a hyper-local marketplace app called ‘Fish’ but it, too, failed. Giridhar says that after burning all his money, he even sold his house, as he felt it was more important to invest in a startup than pay interest to the bank.

“I remember this one day on which I just sat at home, feeling thoroughly discouraged by my by two failures, and thinking of getting back to employment; I needed to support my family. That same day, I got a call from the chairman of a Chennai-based 1400-employee-strong MNC. He offered me a rather senior position, without much of an interview process. I was very tempted to accept his offer, but instead I merely thanked him for offering me the job and didn’t take it up, although it would have met my financial needs. I wanted to try one last time. And in this last-ditch effort, I was able to identify my passion,” reminisces Giridhar.

Giridhar adds that he has been interested in a variety of things all his life, and that his interests have always frequently changed, from joining the armed forces one day, to becoming a pilot the next, to running a restaurant another. However, there was one thing that he always loved and never got tired of: automobiles.

So, every morning for five days in a row, he made a list of things that he liked and made him happy. Automobiles topped the list each day. So he decided that his next startup should be something to do with automobiles, and thus founded Barrel Exhaust in December 2014 along with Roopak.

This boom in the industry itself gave him confidence that with the right product, high quality and a great customer service, there was a good chance of capturing the market.

When Giridhar met Roopak, Roopak was working on a robotics project. He was a fresh graduate in the field of Aerospace Engineering, and a Gold Medalist in Design. “He is creative, a smart hard worker, and a downright crazy rider. Most importantly, he is inquisitive,” says Giridhar. He is “the design guy,” for Barrel Exhaust.

After deciding on design, Giridhar knew he had to get someone who understood motorcycle language, to manage the production and connect with bikers across the country. “I already had a guy in my mind – Marshal Ronad, the admin of the Bengaluru chapter of the first pan-Indian motorcycle club, founded by Jack Jigg, (fondly known as Papa Wofe); The Wolfe Pack India MC,” says Giridhar.

He adds that Marshal too had quit his corporate life and was looking to restart his career in the automobile industry, mostly with motorcycles. An engineer by profession, Marshal was also a dirt track racer in the Royal Enfield 350cc class, and did a lot of testing work for Barrel Exhaust.

In February 2015, Marshal became a part of the Barrel Exhaust team. “I could not have asked for more. The evening’s casual meet-up turned into a good hire, and Marshie now takes care of production, new product testing and vendor/dealer relations,” Giridhar says.

In the beginning, they didn’t have an office. They would, instead, simply stand in some bakery. They would sit in a coffee shop for a meeting once a month only, as these places were expensive, and the team was unable to pay that much very often.

After thinking of different ways to bring in money, Giridhar called up an old colleague and took in a loan of one lakh rupees. With this money the team hired Upslope and made their first branding video. By this time, orders began to come in, increasing every day, and the team decided to get a small office.

The very first product the team made was ‘Canon’, which they had begun testing in October 2014. By November 2014, the team had improvised the product twice, and had a production-ready design. On December 14th, they made their very first sale.

Soon they started to sell few more exhausts, however they found out that the first batch of production had minor quality issues. “We are very particular about quality, so we decided to scrap the entire batch, despite the fact that the defect was unnoticeable. This incident pulled us into a quagmire. But all our customers were so happy with our product that they started marketing for us, spreading good words about us,” adds Giridhar.

By March this year, the team had sold around 30 exhausts and wanted to increase production. Due to lack of funds, Giridhar took a loan from his father, and his friend paid for the trademark registration. “Since our sales cycle was slow, we used to burn the profits as expenses before we could break even,” adds Giridhar.

Soon, the team began looking for mentors. They met Zishaan Hayath at Mumbai for guidance, and K.A. Srinivasan to validate their total addressable market numbers. “We work with a few vendors for some supplies. Initially it was hard to find someone who understood the concept of quality and attention to detail. Most of them have a callous attitude that really is not our way of doing business. We mercilessly rejected, and continue to reject, so many samples and vendors until we get what we want,” adds Giridhar.

By the April of 2015 they had sold a little over 150 exhausts all over India. They saw good traction, and felt ready to step on the gas. “Now, we are in a better position than we were 4 months ago to cater to a large number of patrons. I made one thing clear in my startup and with the team; we will never compete with others, but with ourselves. We need to ensure that we are constantly learning and improving every day, every hour. We believe that in Barrel Exhaust, all we need to do is to take good care of our customers, and they will take care of our business,” Giridhar says.

At their factory in Bengaluru, the team has employed skilled people who understand the level, and importance, of quality that Barrel Exhaust wants to deliver to its customer. Giridhar says that more than just thinking of it as a part of motorcycle, the company sees their accessories, and the bike itself, as an extension of the biker. Hence additional care is taken to choose the best of the steel and machines employed to build the barrels.

Any product that does not clear the QA tests are rejected at the first instance. Also the entire batch goes through rigorous testing and is completely rejected, if need be. Barrel Exhausts also gives a warranty against manufacturing defects, and stands by that promise.

They have launched a new product called Ghost. For it, they are using imported insulating packing, that has a very long life compared to those available in the Indian market. “We don’t compromise on quality, as all people who buy from Barrel Exhausts are the ones who can appreciate the quality and value we bring to the table,” says Giridhar.

EMMAA forecasts that the Indian two-wheeler market will cross 20 million units in annual sales by 2017 and grow beyond 30 million units in annual sales by 2023. Giridhar says that this brings in confidence to the team, as they are planning to cater to a variety of biking needs not limited to one brand. “We are currently more focused on the very large local market, though we have received enquiries from owners of internationally branded bikes from across the globe. We want to set up a R&D unit by the end of 2015, so we can introduce products that increase rider safety and also the performance of the bikes,” concludes Giridhar.