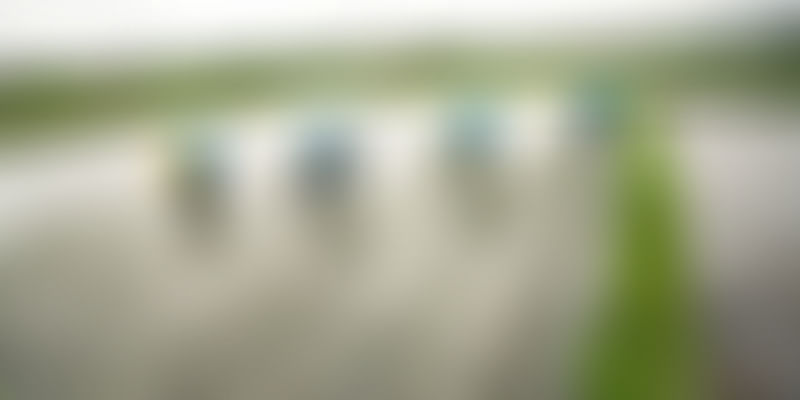 Yesterday, we announced a $3.3 million investment in EM3 AgriServices, a pioneer in providing end-to-end precision-grade farm operations from land preparation to crop harvesting on a pay-per-acre basis. These services help small hold farmers improve productivity by over 20% with cost savings to boot, and provide access to technologies that were hitherto out of reach due to the high capital investments required. I call this Farming-as-a-Service (FaaS) and believe that it will be the foundational paradigm for next green revolution of India.

In the age of ubiquitous ‘atomisation’, where an average Indian farmer is afforded access to a two rupee shampoo sachet, a five rupee Parle-G biscuit packet and a 20 rupee mobile phone recharge, it is surprising that he can’t access professional grade farm operations on a pay per use basis. If Software-as-a-Service (SaaS) and Platform-as-a-Service (PaaS) can exist, why can’t FaaS?

India has the second largest cultivable land base in the world—only marginally behind the US. If there is something that Indians can claim to have global dominance in, apart from a demographic dividend, it is the diversity of climate and top-soil that makes it the only country in the world capable of growing almost any grain, fruit or vegetable in abundance. Instead of being the bread basket of the world, why is it that India barely manages to feed its population?

India is an agrarian society with over 2,000 years of farming experience in one of the most fertile regions of the world. As a result of our basic instinct for farming and a fairly successful, but far from perfect, land titling system instituted at independence, India is now predominantly a country of small hold farmers. Over 85% of Indian farmers own less than five acres of land—a staggering 77 million farming households. With that many farmers at work, it’s not surprising that India’s production volumes are among the world’s highest.

What is very worrying is our productivity.

Indian productivity remains amongst the lowest in the world because we haven’t really found scalable ways to help our small hold farmers to: a) improve on-farm productivity through improved farming techniques and better crop inputs (primarily seeds), b) access markets directly to earn a decent profit on the crop—there are up to 6 intermediaries post-harvest which lead to both loss in quality due to poor handling and margins being skimmed at each level for no value addition, and c) avail adequate credit to invest in (a).

Reclaiming the primacy of the agricultural sector

The current political narrative harbours a palpable fatalism on the declining role of Indian agriculture in India’s economic growth story. The belief among many in the political class is that manufacturing and services alone will save us by providing hundreds of millions of jobs, making us a middle income country with agriculture but a subaltern vestige. It’s easy to see why this is politically sellable. Manufacturing and services jobs offer, at least theoretically, an inspired vision of the future with large shiny workplaces and salaried wages, a far cry from the drudgery of farm life that most Indians are disillusioned with.

However, I believe that India needs to place agriculture on par with manufacturing if it is to be successful in its quest for rapid social and economic development. I base this argument on three trends that I hold as core truths to the country’s development and its progression to becoming a developed nation:

Let’s discuss each of these, starting with urbanisation. Urbanisation is a quintessential Darwinian phenomenon and India is no exception to the axiom. The country has an urban/rural split of 32%/68% and will transition—like all other richer economies have—towards a split that looks closer to 55% urban and 45% rural by 2040. Paradoxical as this may sound, a focus on making rural agriculture profitable and efficient is critical to the real success of urbanisation in India. Ordinarily, the current pace of rural to urban migration would lead to consolidation of land in the villages, even after accounting for fragmentation due to the generational transfer of assets. But what has been seen on the ground in India is to the contrary, with farm fragmentation only increasing over the last decade. The explanation stems from the fact that most migrants from the agricultural sector are poorly educated. They end up finding only low-grade temporary jobs in sectors such as construction, which are not enough to provide them with financial stability as well as an acceptable social status in the city. Neither here nor there, they remain tethered to the land, unable to cut their ties to the village by selling their farm plots. An orderly urbanisation requires that rural folk are educated and skilled so that they can find meaningful careers as they move to the cities. To accomplish this, we need to put more money in the hands of the small farmer, not merely through dole-outs, but by assisting him in both producing more tons per acre and earning more per ton of crop.

Which brings us to the issue of productivity gains—an anathema to the political class since they put the people who elected them in the first place out of a job. That said, it would be foolish to deny the fact that productivity gains led by technology are a germinal human trait and therefore cannot be halted across any sector over long periods. Agriculture and manufacturing will be affected, and understanding the impact of technology and automation will be crucial to making the right choices for development and economic growth. My personal belief is that from the perspective of technological obsolescence, agriculture is probably in a safer place compared to manufacturing. We are indeed a long way from the day where farming is no longer tied to the land and India’s ownership of the most fertile patch of earth is worth nothing. Folks such as Rob Rhinehart will have to wait a while before they witness the end of farming. Until then, Mark Twain will continue to have the last word.

India is currently at the ebb of agricultural productivity, and although there may be both optimistic and pessimistic scenarios around the pace of development in the sector, I see only a one way street to productivity gains from here. If a household of five is currently involved in farming, two of them may eventually produce twice their current production. This will afford the farming household enough financial security for the rest of the family to appropriately skill themselves to exploit aspirational opportunities in the manufacturing and services economies in the city. Wilfully enabling this transition will help India create both a richer nation and a more equitable society.

Last, India’s move to a consumption economy ahead of becoming a middle income country (unlike China) is unique and will continue to remain so. It is here that India should not miss the opportunity to not only build leadership in manufacturing & services exports, but also to become the bread basket of the world. This will significantly enhance our GDP while also enabling equity in wealth creation along the population pyramid. After all, farming is a vocation that we have known for eons and fittingly adheres to the much vaunted ideal of “Make in India”.

How do we get this done?

Small farmers will continue to be the mainstay of Indian agriculture. Enabling productivity improvements as well as providing access to markets and credit to these farmers will be critical in claiming India’s global leadership in agriculture.

Our approach at Aspada over the last few years has been to invest in companies that control the entire value chain—from seed to shelf—for specific crops via farm extension, market linkages, and enabling finance for small hold farmers. Our investments in SV Agri (potato), LEAF (fresh vegetables), Allfresh(apples and citrus), INI Farms (pomegranates and banana) are all poised to be or already are market leaders in their respective value chains.

Our latest investment, EM3, takes a more horizontal approach by specifically focusing on solving the on-farm productivity improvement problem through precision farm operations as a service. We believe the timing for this intervention is right, given we’re at an inflection point where mechanisation services are starting to become cheaper than farm labour. A staggering 330 million acres awaits ‘tech and mech’ in India.

EM3’s longer term goal is to become a full-stack agri-marketplace for small farmers to access credit, buy inputs, and sell their produce seamlessly through the mobile phone. The company’s proprietary access to granular farmer and farm level data through its operations place it in a unique position to become a canonical market leader in the sector.

Indian agriculture can thrive. The global demand for food will only continue to rise, as will the transition to higher value crops and the move from growing cereals to proteins and fats. As long as there are cost-efficient and transparent ways to enable our farmers to grow food, there will be also be no shortage of investment and farm credit.

There are still fundamental follies of the past and present that continue to deter us: overuse of nitrogenous fertilisers that erode soil fertility; a lack of sufficient farm credit in the system; and; an archaic mandated market (APMC) system (which thankfully is being progressively dismantled) to name a few. Nevertheless, we shall overcome.

Allowing every small farming household to unlock the true economic potential of their assets is the only way India can build a richer economy while maintaining harmony in our transition to a more urbanized society. Onward to the next green revolution.